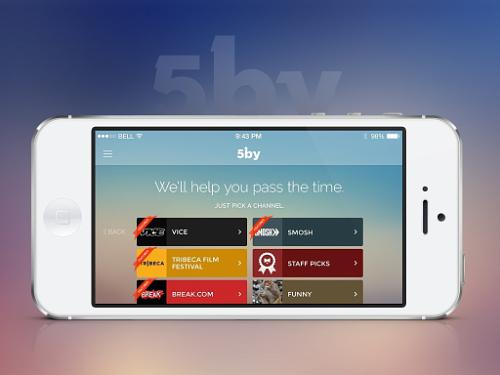 Montreal-born and San Francisco-based startup 5by announced today it has entered a partnership with VICE Media, Tribeca Enterprises, and DEFY Media. Vice, the site that launched back in 1994 in Montreal, garners over 100 million unique visits per month. Tribeca is a giant in its own right as well, as the New York-based media company responsible for the film company and film festival.

5by was founded by NDGer Greg Isenberg, who sold the company to San Francisco’s StumbleUpon in under a year after founding it. 5by calls itself “the simplest and fastest way to find, watch, and share the best videos from across the web.”

The partnership means good things for 5by users. In addition to finding and watching videos on the web based on mood and interest, 5by users can now navigate to partner channels to watch freshly curated video playlists. Partner experiences will appear on the home screen or as channels depending on the time of day and individual preferences.

“We were really, really keen on becoming partners with VICE because their video content is amazing and they were excited about getting their content seen by the 5by community,” said Isenberg. “5by’s becoming a place where if you want your content to go viral or get tons of eyeballs, brands/video creators are coming to us.

5by appeals to the passive viewing experience, akin to services like Songza. These platforms ask the user what they’re in the mood for and the content never stops. Unlike Youtube, a user doesn’t have to continually search for new videos.

For Isenberg, it sounds like the partnership is significant for him, personally, as well.

“As a kid in Montreal, I looked up to Shane and the VICE team, and I’ve been following them religiously. I used to pick up the VICE magazines all the time. So I was really excited that they understood our vision to be the best place to find and share online videos.”

Toronto-based Flashstock, which provides custom photos and videos for brands, has raised $1.5 million in funding from angel investors. FlashStock received its latest round…