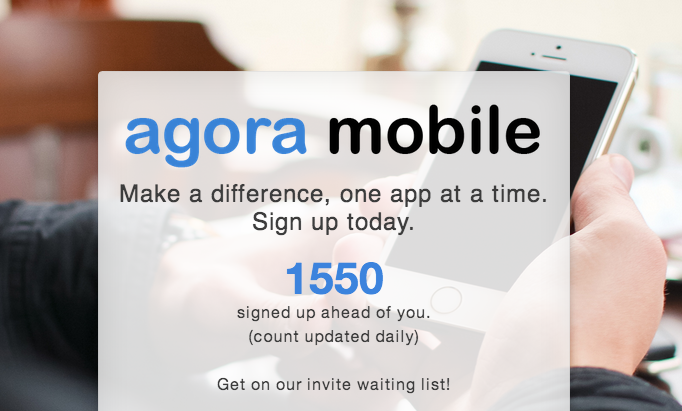 Agora Mobile helps people develop apps across all platforms, using a visual, instead of textual, (a.k.a. computer code) development tool for the creation and testing of apps.

The current mobile app development industry, said the company, is “rife with incompatible hardware platforms, operating systems and programming languages.” It’s increasingly difficult for developers to build apps that work on everything Apple, Android, Windows and Blackberry. With Agora, anyone can now create apps that work on all mobile devices that never have to be downloaded or updated.

“In the 1990’s Web 1.0 was all about buying and downloading software and installing it on your computer. Web 2.0 was all about using software through your browser or ‘the cloud’ for a fee,” said CEO Simon Gauvin, “Web 3.0 is doing for smartphones what Web 2.0 did for personal computers—apps delivered through the phone’s web browser instead of downloading and constantly updating them, eating up memory.”

Agora Mobile calls itself a social network, and one that provides a platform for the delivery and sale of apps to its members, “replacing the app store.” The company has recruited hundreds of students of all ages across Atlantic Canada to build and test apps as they fine-tune the current version, now in private beta.

“This is a perfect example of what’s called disruptive innovation, and what we like to see. Companies that can take something that is currently very expensive and time consuming, and make it less expensive and more accessible to people that need it, but can’t afford to do the way it’s done right now,” said NBIF chair Robert Hatheway, “There are over 500,000 apps that have been downloaded 25 billion times, and the mobile sector of ICT is growing fast, and so will Agora with it.”