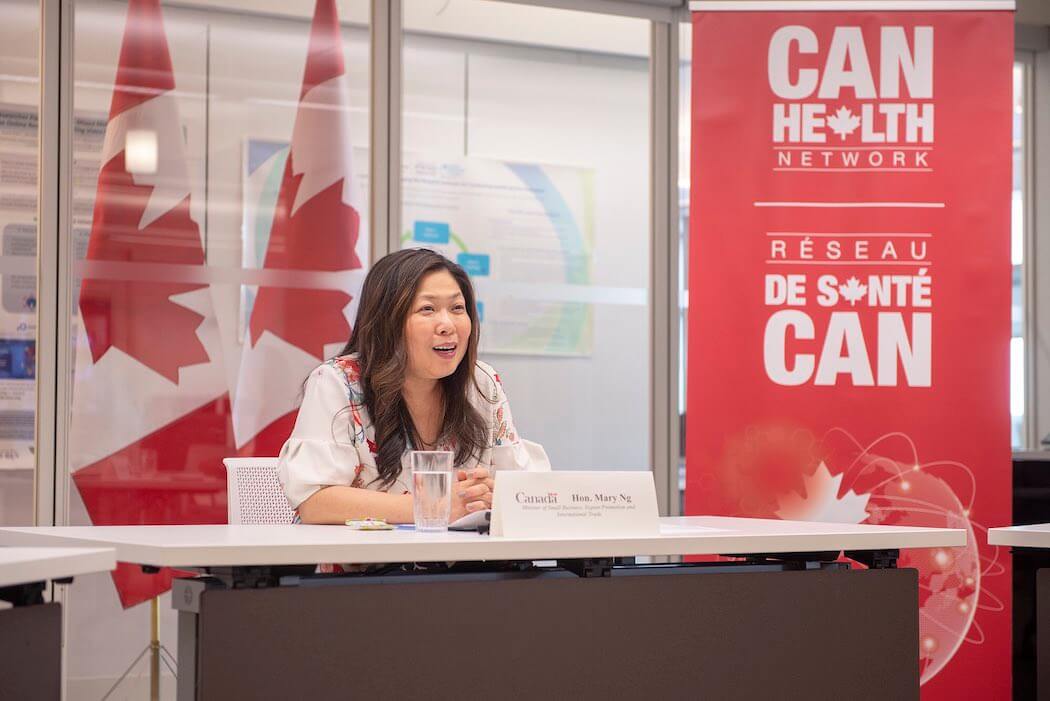 The CAN Health Network is a project that was launched by the federal government last year to help connect healthtech startups with Canadian healthcare institutions, and streamline the procurement process in the sector. The goal of the initiative is to support local healthtech companies in commercializing their technologies by sourcing major customers within Canada.

“Companies were frustrated because they would not be able to find those opportunities in this sector.”

Over the past 12 months, the CAN Health Network, which is considered an “integrated market,” has grown to include 15 Canadian healthcare organizations, spanning small clinics and large hospitals. According to the government, there are now 10 commercialization projects underway.

BetaKit spoke with Minister of Small Business, Export Promotion and International Trade Mary Ng, recently, about the procurement project. She shared her thoughts on how COVID-19 has affected procurement in Canada and pointed to the potential to use the CAN Health Network procurement model in other sectors in the future.

Procurement in the Canadian healthcare sector has long been a pain point for companies looking to work with local hospitals and clinics. A 2016 survey across Council of Academic Hospitals of Ontario members (Ontario’s 23 academic research hospitals), found that the majority of respondents reported policies, directives, and procurement regulations as “major hurdles” to adopting innovation within their organizations.

“What I was seeing far too often were companies that were Canadian companies that could not get access to the Canadian market of … our health providers,” Ng told BetaKit. “These are significant institutions, from small clinics to large hospitals, [and] they have incredible procurement capabilities.”

“But, companies were frustrated because they would not be able to find those opportunities in this sector,” Ng said.

The minister noted that the reason behind launching the CAN Health Network was to help Canadian startups scale-up by sourcing Canadian healthcare institutions as customers.

“What [the network] is doing,” Ng said. “[Is having healthcare providers] working directly with companies to adopt them, to be the early adopters, so that companies can actually scale-up.”

“We…are going to look at the integrated market as a way of being able to…apply it to other sectors.”

One of the projects being funded by the network, announced earlier this year, is working to create a “digital link” between hospital and long-term care homes. The project, which was inspired by COVID-19, includes St. Joseph’s Healthcare Hamilton and St. Joseph’s Villa in Dundas, as well as PointClickCare. Toronto-based PointClickCare provides cloud-based software for long-term and post-acute care providers.

“[The companies in the network] are actually getting a significant customer, and therefore building up revenue growth,” said Ng. “They are now also able to expand.”

With the CAN Health Network one-year-old, Ng told BetaKit that the government is now looking to the network as an example of how similar initiatives could be undertaken in different sectors.

“We are interested in learning from this first integrated market, CAN Health, so that it could be a solution to adopt other technology solutions that have found those similar difficulties,” the minister said in regards to other sectors that also deal with challenges around procurement processes.

“We certainly are going to look at the integrated market as a way of being able to perhaps apply it to other sectors,” she added.

Ng pointed to sectors such as cleantech and AgTech as potential areas where similar integrated markets could be created.

The minister would not provide details on whether the government was seriously considering new programs like CAN Health at this time, noting, “it’s a little to soon.” She stated that the federal government is watching the CAN Health Network and hopes to learn from its “experiences” and “lessons.”

Speaking with the minister she also noted how COVID-19 has affected procurement within Canada, notably in the healthcare sector.

“COVID has highlighted the importance of having a Canadian, made in Canada solution that enables technology or healthcare innovation to be adopted in this country,” Ng said, pointing to a project between Trillium Health Partners and healthtech startup Maple as one example.

The federal government’s COVID-19 response has included refocusing its innovation and procurement programs, with the aim of making it easier and faster to deploy resources to domestic manufacturers and businesses. In mid-March, the Government of Canada began working with existing and new providers to develop new supply chains.

This response also included mandating programs such as the Innovation Superclusters to focus on investing in projects that support the fight against COVID-19.

In addition to the CAN Health Network potentially informing similar programs in different sectors, the government also has plans to grow the health network into other regions of Canada.

When the program was announced, it was noted that further expansion was planned for Quebec, Atlantic Canada, and Northern Canada. There have been no details as of yet on the regional expansion. The government noted that “successes” of its initial $7 million investment would guide future funding decisions.

Talentful might be the solution to the tech sector’s biggest gripe: hiring talent

The perennial question of how Canada’s startup sector can hire and retain the tech talent it needs is bound to have multiple answers. One…