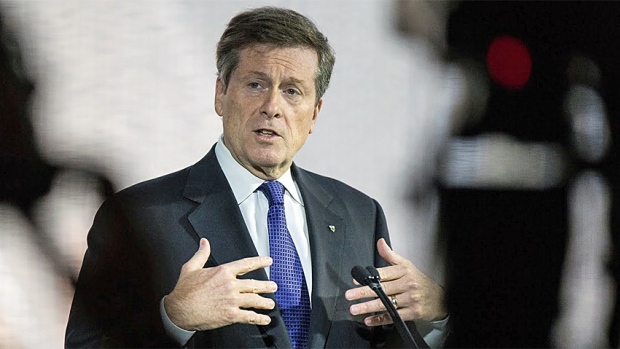 On October 21-23rd, John Tory will be making a business trip to London, England with six startups to make a case for why Toronto is a hotbed for FinTech innovation.

“London is a global financial powerhouse regarded by many as the cross of the world, and with this business mission I hope to broaden existing business relationships and facilitate new investment opportunities,” said Mayor Tory. “Toronto and London share many priorities as large urban centres, like the growing demand for transportation and transit networks. I hope to gain insight into how their transportation planning and their experience with London’s Crossrail construction can benefit our city.”

Eva Wong, co-founder and COO of Borrowell, is excited about the opportunity that the trip will bring. While in London, the company will be able to visit Level 39, Europe’s largest tech accelerator for finance, retail, and cybersecurity, meet key people in the London tech community, and tour Tech City. “As a country, the UK is a global leader in FinTech,” said Wong. “The FinTech landscape is much more established there than it is pretty much anywhere in the world. An investment from the UK would bring not only capital, but a lot of knowledge and expertise about consumer behaviour, adoption, regulatory support and how things might change in Canada as our own industry matures.”

At the same time, Andrew Graham, co-founder and CEO of Borrowell, said that events like this are indicative of the explosion of FinTech innovation in Canada — much of it led by startups. “The reality is that in Canada, financial services has been way behind for too long. For example, depositing a cheque by taking a photo of it has been available elsewhere for many years – it just recently came to Canada,” said Graham. “At Borrowell, we offer consumers the ability to instantly check their rate on a loan with us. We’re not aware of any Canadian bank that offers a similar service; you still have to come into the branch and fill out paper forms. Canadian banks are some of the most profitable in the world, so there hasn’t been the same impetus to innovate.”

Despite growth and optimism, businesses are losing out due to talent shortage, report finds

According to the 2019 Hays Canada Salary Guide released last month, two-thirds of employers anticipate the thriving economy will add to their bottom line,…