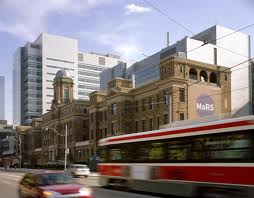 The public controversy that has exposed a nearly half a billion dollar taxpayer bailout for the cash-strapped MaRS Discovery District continues to heat up.

The Toronto Star reported this morning that the provincial government’s plan to buy the building complex, after it couldn’t pay back a $234 million loan from 2011, would include a projected $36 million loss over ten years. Overall expenses are projected to be greater than revenues through 2023-24 due, in part, to a lack of tenants.

And as with many of the proposed expenses linked to the bailout, the cost of these particular shortfalls would be borne by the province.

However, the Liberal’s say in the documents that “they do not show the full story” and that the building is a “40-year project.”

The proposed plan would see the public and privately funded charity MaRS Discovery District to begin earning surpluses in 2018-2019, but nearly $50 million of operating deficits would spell losses.

One tweet since deleted by the organization’s Twitter account advised its followers that “No one likes accounting errors. We’ve got tips to help separate your business and personal finances. http://marsdd.it/1gXHaQ3 “

On Thursday it became known that the provincial government and a US-based real estate developer, Alexandria Real Estate Equities Inc. (who has since gone silent) were planning to purchase the nearly empty building in downtown Toronto at College and University avenues. The total purchase would be $317.5 million, essentially translating to a bailout, with estimates as high as half a billion dollars.

MaRS was at risk of defaulting on the $234 million loan issued by the province of Ontario in 2011, as its rental income from tenants fell way short. It was only able to lease 31 percent of the building.

Several real estate brokers in Toronto told the Star that the rents are too high for the northerly downtown location and more in line with the high-demand, high-priced core within walking distance of Union Station. Meanwhile the Christian Lassonde, a partner at Impression Ventures, told the Globe and Mail that “probably the number one reason is cost. Startups are very market-driven. They want to spend money on people, which are the number one reason for success or failure, and as little as possible on space.”

Before all the dust had settled The Star revealed that the entire proposal would cost Ontario taxpayers nearly half a billion dollars. The $477-million price tag includes $317 million for the building and land, $106 million for renovations, as well as other costs.

Ontario’s premier Wynne called the government-funded startup and research hub a “world-renowned centre of research and the commercialization of innovation and technology,” and that spending public money is “the right thing to do.”

Meanwhile the Globe also revealed that MaRS’s nearly empty “Phase 2” tower has signed a lease with just one private innovation company that is not already located at the business incubator’s main facility.

Yesterday the “innovation” centre’s board of directors and its CEO fired back in a statement, warning the public and media that “the fact that these documents have been made public may, in fact, be harmful to the ultimate completion of the real estate transaction that is underway.”

The board also said “there were no documents that should be in the public domain,” and that “no transaction has been finalized.” When a transaction is completed, wrote the directors, “we are confident it will meet all tests of serving the public interest.”

Vancouver’s GrowLab Freshens Up For Spring, Introduces Its Newest Cohort

For the next three weeks it might as well be called GoLab, because a van full of founders has hit the road. With new…