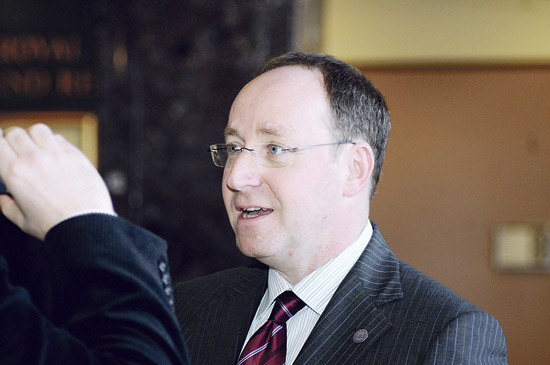 Here’s something we don’t hear everyday: a St. John’s, Newfoundland-based angel investor named Jo Mark Zurel actually goes into meetings wanting to write a cheque to an entrepreneur, rather than the opposite.

The story was reported by the Financial Post‘s Armina Ligaya yesterday morning.

The title was actually “Why this Newfoundland angel investor doesn’t buy into Dragons’ Den scare tactics”. Zurel told the paper he doesn’t agree with the way the Dragons treat some entrepreneurs- which usually tip-toes the line between extreme honesty and outright ridicule. Some times, mostly with outgoing Dragon Kevin O’Leary, entrepreneurs would bear the brunt of a real fire-breather’s insults.

In fact, we wrote about one Montreal man who went as far as trying the Supreme Court after he thought he was made to be a fool in front of the CBC cameras. The Supreme Court elected to pass on the case.

“It’s the dark side of angel investing, where they really frighten entrepreneurs and they also frighten off investors because nobody wants to be part of that sort of thing… We go in with a bias to writing a cheque,” Zurel told the Post.

Zurel, a South African-born entrepreneur and investor, first settled in Newfoundland in 1991. Since 2004 the investor has written cheques to 15 startups, for a combined $1 million. He’s had some losses- namely Halifax-based biotech company Immunovaccine Technologies, where one of its directors walked away with a “huge profit” after the complaint went public via reverse-takeover.

But Zurel’s investment philosophy clearly differs from most venture capitalists who come into deals with automatic skepticism. After all, giving a million bucks to a few entrepreneurs one just met is a big decision. Zurel though told the post “I’ll invest in most of the things I listen to.”

Of course that comes with a few asterisks: namely, that the entrepreneur can’t be a know it all. “As soon as I meet someone who won’t acknowledge risks that seem obvious to everyone else because they think they have all the answers, I just head for the exits,” he said. We have to think that most investors will probably share that same mentality with the angel investor.

Zurel has allocated a portion of his investment cash to the private, family-owned Stonebridge Capital. He has “earmarked as much as $1.5-million but said he is comfortable with the $1-million he has invested now. He regularly invests through the Newfoundland and Labrador Angel Network.”

The Quebec-based Scale AI Supercluster, one of five members of the federal government’s Innovation Superclusters Initiative, focusing on artificial intelligence for supply chains, has…