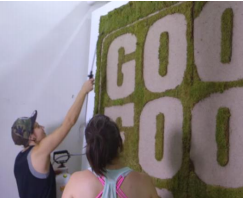 Toronto’s MakeWorks has raised over half of its targeted $20,000 crowdfunding project, in which the creative marker studio is selling member products, MakeWorks memberships, workshop tickets, coworking space memberships and even the right to name the espresso machine (which has been claimed for a $700 pledge).

Over the last twenty days, MakeWorks Founder, Mike Stern and his team have been trying to raise money for renovations and a potential second location. In July the maker space revealed that Indiegogo Canada had moved into its offices and that the anticipating crowdfunding campaign would be the “first of its kind“.

Since then the space said the coworking memberships available through the campaign have nearly been sold out as the space nears its
capacity. It’s an “amazing ecosystem of makers, freelancers, and entrepreneurs,” who all make products that MakeWorks will
now be offering along with workshops created and organized by the members.

Here’s some of what the members have to offer:

Jordan Bishop, Wise Words: Jordan recently joined MakeWorks to grow his unique line of greeting cards: Wise Words. Lately he has drummed up some international attention with his creative crowdfunding campaign that asked for pre-orders before the actual product was disclosed, nearly selling out in a few days. Wise Words greeting cards may be available through the MakeWorks Indiegogo campaign in the coming weeks if they are not already completely sold out.

Julie Forand, Sprout Guerrilla: Julie and her colleagues from Sprout Guerrilla are also new to MakeWorks. They use special moss to create installations and artwork, and MakeWorks and Sprout Guerrilla have teamed up to create the Live Moss Coaster. “The variety of moss is called Hypnum moss,” said Forand. “When it’s moist it’s alive – so water condensation from cold drinks on a summer day will keep the moss happy.”

Bruno Wong, Orchard: Bruno is the co-founder of Orchard, a trusted concierge service that makes buying and selling used iPhones incredibly easy, safe, and fair. Before starting Orchard, Bruno had established Technest Consulting Group, a boutique agency specializing in the creation and execution of social media strategy, and also worked in the PR and Marketing industry in New York City, serving major clients such as Prada, Hugo Boss, Nike and Victoria’s Secret. Orchard and MakeWorks will be collaborating even further in the coming weeks so keep a close eye on the campaign.

Derek Quenneville, MakeLab: Derek is the 3D Guru at MakeLab, a rapid technology prototyping lab for advertising agencies. Considered the godfather of 3D printing in Toronto and an underground celebrity in the Maker community, Derek will be running several of the workshops that MakeWorks is offering through its campaign this summer.

When Mallorie Brodie describes the process of preparing for a pitch, I can tell I’m talking to an expert. Bridgit Solutions, the company she…