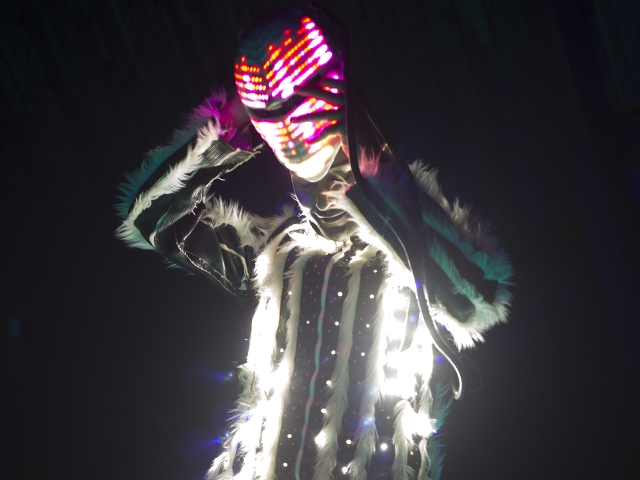 What do LED lights, science experiments, and a giant dancing praying mantis made of paper have in common?

These were the sights and sounds that came together for Thursday’s Maker Festival kickoff party at 918 Bathurst, the beginning of 42 satellite events taking place in the city over the next few weeks.

It’s the first time that Maker Festival is operating under the ‘Festival’ rather than ‘Faire’ name. “We wanted something that would involve the whole city and not just a weekend at a particular place,” said Eric Boyd, founder of Senseridge electronic jewelry company and director of festival organizing at Maker Festival. “Maker Faire last year had over 10,000 people and 80 exhibitors, so it’s not exactly low-key.”

Stressing that this goes beyond Apple Watches and Fitbits, the models rocking Cosco’s curated pieces — with pieces travelling from as far as San Francisco — demonstrated what fashion and tech can mean on the LED runway. “I think this is long overdue judging by the response she got in just six weeks of planning,” said Boyd, who contributed two pieces in collaboration with Wendy Ng of DYSTROPOLIS. “There are lots of people at home making clothing on sewing machines, there are lots of people at home making tech, but there’s not a lot of people yet making their own technological clothing.”

The fashion portion was separated into three parts. In the first portion, Cosco featured tech products that are in the market now. The models walking down the runway wore eSight eyewear, and one model bride wore a corset designed by Dianna DiNoble that integrated technology like 3D printing.

The second portion of the show was based on prototypes – concepts, ideas, and performance pieces – including Daily Goods Fashion Tech, a company focused on bringing a high-quality fashion tech experience that featured a work-in-progress modular dress to demonstrate that tech is sometimes passive, not always active, through its materials. The base of the first prototype allowed for heating and cooling, with additional layers for sun protection. Finally, the Ryerson Fashion Zone-based Stylekick, an app that helps people find clothing that takes inspiration from street style, featured their own curated collection.

Stylekick curated a runway show at @electric_runway, and it was great meeting and working with everyone! pic.twitter.com/gtwXpli1bc

Other notable pieces included an outfit inspired by Daenerys Targaryen from Game of Thrones, and a skirt that could be flipped up by the model to reveal a colourful peacock design, inspired by Toronto’s free-spirited High Park Zoo peacock.

“I look at the intersection of fashion and tech and I think it’s interesting because they’re two industries that really need each other,” said Cosco after the event, herself wearing a laser-cut skirt and a cardigan blinged-out with LED lights. “Technology and makers are all about finding efficiencies, and the fashion industry is severely broken right now. If you look at what happened in Bangladesh, there’s no clearer proof that we need to disrupt that industry.”

Cosco continued to say that tech wearables are currently stuck in a ‘gadget’ or ‘wristable’ phase, and she wants to see that change. “They [tech wearable designers] need designers who think with a fashion-first mind in order to make their hardware more wearable and more aesthetically beautiful.”