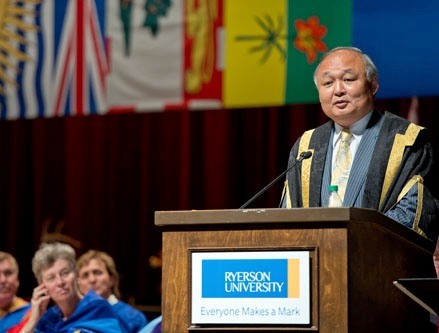 Longtime financial services entrepreneur and Order of Canada recipient G. Raymond Chang has passed away at the age of 65, after receiving bone marrow transplants months ago.

Chang, who’s name graces Ryerson University’s School of Continuing Education, died yesterday. The former CEO of CI Financial, and the third chancellor of Ryerson University until 2012, was well-known for his philanthropy.

He’s also no stranger to the entrepreneurial community, having blazed a trail himself as a Jamaican-Chinese immigrant who came to Canada and excelled in the financial services world. He immigrated in 1967, before his 20th birthday, to study at the University of Toronto, and would cofound CI 17 years later in 1984.

Chang went on to found the software firm Mercatus Technologies as well, a Toronto-based multi-channel commerce platform for grocery retail. Chang was also the main funder of the new Brightlane coworking space at the corner of King St. West and Spadina Avenue, set to open in October.

“The loss is not only huge to the university, but to the entire country. You could never say enough about what he accomplished and his humility and love of life,” Ryerson University’s president Sheldon Levy told the Toronto Star.

Chang was one of 12 children raised by Gladstone and Maisie Chang in Kingston during the 1950s and ’60s, wrote the Star. In a book by Ray Chen, The Shopkeepers, chronicling 150 years of the Chinese in Jamaica, Chang recounts his childhood with 30 siblings and cousins living in five houses on the same street.

He was made a recipient of the Order of Canada this year, and received the Order of Jamaica three years earlier.