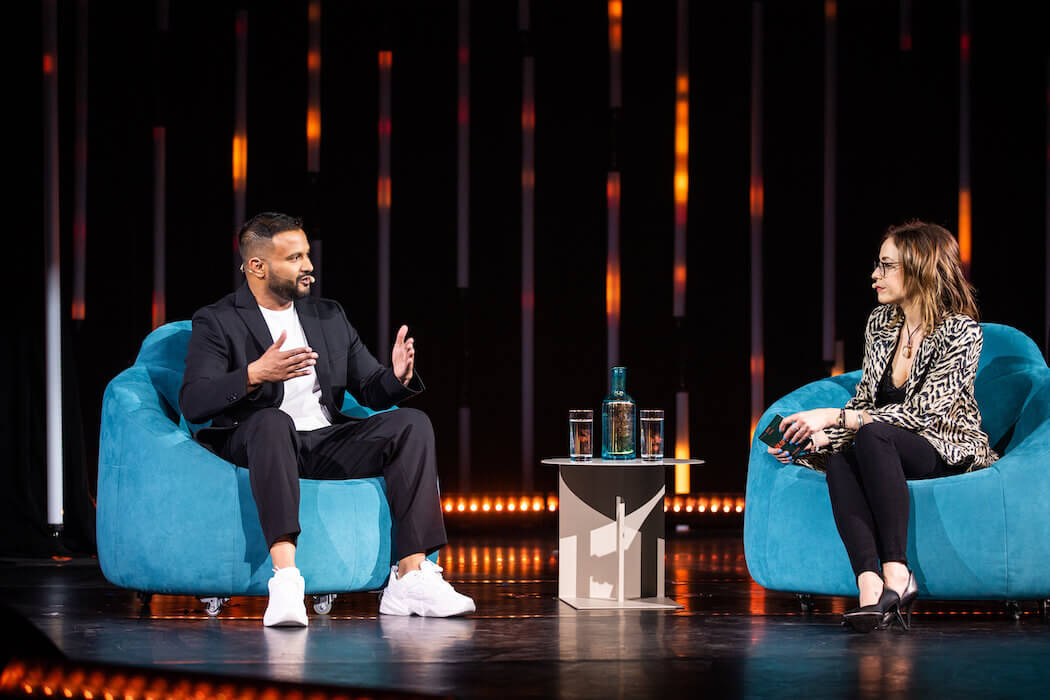 During C2 Montreal, one of the biggest annual conferences on innovation in the city, the concept of impactful leadership was a significant topic of discussion in the conversation between Dax Dasilva, CEO of Lightspeed, and television host Shira Lazar.

“Lightspeed wouldn’t have happened if it had not been for me investing in myself and as an instrument.”
-Dax Dasilva

At the Digital Creativity Summit during the conference, the two talked about the launch of the tech entrepreneur’s new book – Age of Union: Igniting the Changemaker. Dasilva touched on the four main pillars of his book: leadership, culture, spirituality, and nature.

“[Lightspeed] went public because I was able to ignite these secret ingredients that I knew were inside of me,” Dasilva told the audience.

He called Age of Union the product of years of learning, not only as he found success through entrepreneurship, but as he invested time and passion into his cultural centre, Never Apart. The organization is now a cultural hub that is currently run out of a former Lightspeed office in Montreal.

“It’s a laboratory for how culture can be a universal way of connecting people from different backgrounds and people from different communities, said Dasilva. “It’s through art, music, dance, performance, all these cultural elements that we can learn about each other and build understanding. Never Apart was [originally] a gallery, but it was so much more than that.”

Dasilva stated that building the hub also contributed to the development of Lightspeed’s company culture, noting that strong culture had been important to him from the beginning. Lightspeed had, and still has, strong ties to the LGBTQ community and a diverse team, helping to create its identity as a business, “to crystallize [our] DNA.”

What does my company need from me?

Along with building its own internal culture Lightspeed has also worked with local independent entrepreneurs that are looking to make changes in their own neighbourhoods and communities. Dasilva said he’s noticed that many founders in the tech space are building significant projects, for example, a non-profit or an art project.

“They’re doing this without any sort of foundation, and it can be difficult when you go through challenges,” he said, insisting that building themselves as an instrument can take tech founders through dark times and as well as the bright.

“I can’t prescribe a spiritual journey, but I can tell you that Lightspeed wouldn’t have happened if it had not been for me investing in myself and as an instrument”, Dasilva told BetaKit in a one on one interview, noting that being an instrument can be explored through the question, “what does my company need from me.”

To discover the answer to that question Dasilva argued that leaders should re-engage with things that need their attention. These relearning periods are the best time for CEOs to ask themselves whom they need to be for their business as well as what they can trust to other team members, allow them to make mistakes and build them up as leaders, he said, noting that “a true leader creates leaders.”

Those types of leaders will contribute to a better tomorrow Dasilva argued. He stated that in his opinion many solutions for creating that future are found in culture. Lightspeed, for example, works with resellers and has offices who operate in a number of different countries, and because of that Dasilva and his team had to learn to communicate in various ways. This experience taught Lightspeed’s team how difference could be a teacher as opposed to being a source of fear or division.

Dasilva also argued at C2, as well as in his book, that people and businesses should not forget the importance of spirituality, a topic he said is often overlooked in the business world.

“It’s a topic that we have a tough time exploring because there’s no modern way to talk about how we connect to a greater purpose and how we connect to a greater union,” he told BetaKit. “What I mean by a greater union is how do we enlarge our circle of empathy to care more for others than ourselves or our friends or our city. How do we extend that to all living creatures on the planet?”

According to Dasilva, the answer to this question lies in us, as we can all be change makers. “This is the age of the self. We have more individual empowerment in this period than ever before in history. It’s at this moment where there’s this individual empowerment that can turn us completely inwards, or we can focus outwards for the greater good.”