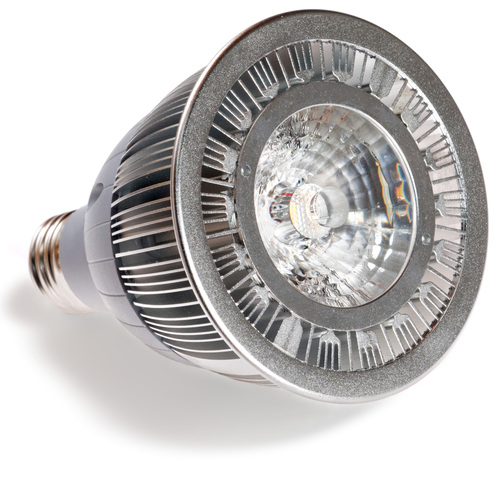 With the worldwide market for LED bulbs projected to grow to $107 billion US annually within three years, and a recent surge of interest in energy-efficient LED lighting, there’s ample room for several winners to take the space.

Earlier last month the company was formally recognized by The Institute of Electrical and Electronics Engineers (IEEE), being awarded an “Outstanding High Technology Recognition Award”. Just four awards were handed out, in honor of “LED lamps with Intelligent Optics, architectural quality illumination and energy-saving technologies”.

So what are/is “Intelligent Optics”? Basically it’s the state-of-the-art integration of optical, electro-optical, and opto-mechanical technologies. “Electro-optics” is components, devices and systems which operate by modification of the optical properties of a material by an electric field. Central to the technology is the interaction between the electromagnetic (optical) and the electrical (electronic) states of materials.

With Leapfrog Lighting though, the company’s research and development puts a special focus on quality of light. CEO Stephen Naor said that the two obstacles to mainstream adoption of LED lighting are quality of light and economic value proposition. Leapfrog’s LED technology, based on advanced optical and thermal designs, is engineered to remove both barriers to adoption of energy-efficient LED light bulbs.

Leapfrog Lighting enables LED energy-efficient lighting to provide a consistent and controllable quality of light suitable to many demanding applications such as art galleries, architectural and interior design and retail product displays.

In May the Ottawa Business Journal explained that Naor and the company actually came from another failed company. They “spent years developing light emitter chips for LEDs as part of Group IV Semiconductor, an Ottawa company that received a ‘substantial’ investment …When that company disbanded, Mr. Naor rebranded as Leapfrog Lighting and decided the market was ripe enough to get products out the door,” according to the OBJ.

“It’s been obvious for a while that LED-based lighting is moving into the mainstream,” Naor told the newspaper. “It’s becoming a competitive industry … It’s never been as competitive as it’s about to become.”

The company has a bit of cash to work with too. In March the Canadian government awarded Leapfrog a $150,000 grant through the National Research Council of Canada’s Industrial Research Assistance Program.

Vancouver-based media and technology company BroadbandTV saw record revenue and views on its platform in the third quarter of 2020, according to the latest…