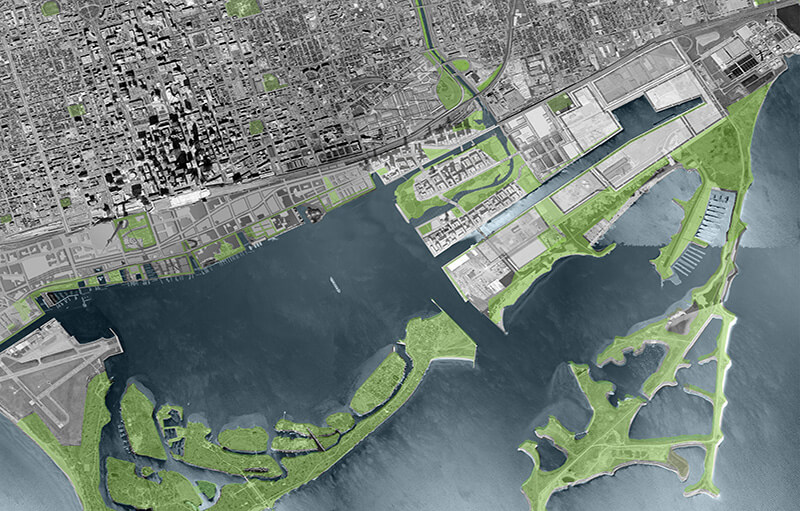 Sidewalk Labs is looking to redevelop 350 acres in the Port Lands area, nearly 30 times larger than its original 12-acre Quayside proposal, according to files leaked to the Toronto Star yesterday.

The Star reported that the California-based, Alphabet Inc. company is planning to build an underground infrastructure, an LRT, and is also looking for a share of the property taxes, development fees, and increased value of the land in order to finance this concept.

“Sidewalk Labs will wield their economic clout and political influence to get what they want…Where is the public accountability?” – Toronto city councillor, Janet Davis

A map included in the presentation exhibits plans to build 6 million square feet of “vertical development” on 20 acres in the Quayside and Villiers West areas, leaving additional areas to the east and south for others to build on after “horizontal infrastructure” is installed. Internal documents and slides from a presentation given to parent company Alphabet in November (marked “proprietary and confidential”), obtained by the Toronto Star, indicate Sidewalk Labs is contending it is “entitled to…a share in the uptick in land value on the entire geography…a share of developer charges and incremental tax revenue on all land.”

These future revenues, based on the expected upsurge in land value, once the Port Lands are developed, could amount to $6 billion over the next 30 years, according to the Star, and the revenue stream would be redirected from the public’s hands to private corporations. The slides also indicated Google’s Canadian headquarters will be built on Villiers Island.

What’s more concerning for many, like NDP MP Charlie Angus, is that these plans are all being discussed confidentially. Since the announcement, a slew of criticism and concerns have arisen from politicians, urban planners, and former Sidewalk Labs board members. Angus spoke to MobileSyrup about the new revelations on February 15.

“[The Liberals] pretended that this is some cool little project when all along it was about turning over some of their richest real estate land in the world to one of the biggest American corporations,” Angus said to MobileSyrup.

Angus also said in a tweet that he has written to the Infrastructure Minister twice about his concerns with the process of the Sidewalk Labs negotiations. “I’m expecting answers,” Angus wrote. “Possibility of backroom PMO influence on arms-length Waterfront TO is worrying.”

I've written the Infrastructure Minister twice about my concerns with process regarding the Sidewalk Labs project in Toronto. I'm expecting answers. Possibility of backroom PMO influence on arms-length Waterfront TO is worrying. https://t.co/R510SIi0ed

Waterfront Toronto board member and the local councilor for Quayside, Joe Cressy wrote that neither division had received any proposed business plans for Sidewalk Labs, and that when it received one, the city would host a public debate on the matter.

“I vow to see that the public’s interests are protected as we review all aspects of the proposal,” Cressy wrote.

Quayside is 12 acres of publicly owned land (Waterfront TO has 10 1/2 & Toronto has 1 1/2). Sidewalk Labs is developing a proposal, but the City will host an open public debate on it. I vow to see that the public’s interests are protected as we review all aspects of the proposal.

“The City owns the land. The City can demand high quality public realm as part of its development. There is ample interest in the opportunity. We. Don’t. Need. Sidewalk. They need us…” tweeted Toronto urban planner, Gil Meslin.

The City owns the land.
The City can demand high quality public realm as part of its development.
There is ample interest in the opportunity.

We. Don’t. Need. Sidewalk.
They need us… pic.twitter.com/HwxFpzfjUE

“It’s not about trust, it’s about power,” wrote Toronto city councillor, Janet Davis in a tweet. “Sidewalk Labs will wield their economic clout [and] political influence to get what they want- access to public lands for private gain, control of government functions [and] revenue. Where is the public accountability? Scary.”

In a Medium post released February 14, the CEO of Sidewalk Labs, Dan Doctoroff, confirmed plans to develop a Waterfront LRT, and build 2,500 units of housing in Quayside. He also confirmed plans to create an Innovative Development and Economic Activation (IDEA) District in order to “spur inclusive growth, including the creation of a value-capture zone in which development charges, incremental property taxes, and increased land value stemming from the project [that] would be used to finance enabling infrastructure.”

Doctoroff explained that the company is negotiating benchmark values for the publicly-owned land. Therefore, when the city sells the land to developers, Sidewalk Labs would be entitled to a portion of the increase in the land’s value.

“We would then recoup those investments through sharing in those revenue streams if and when they materialize,” Doctoroff claimed.

Since the leaked documents were made public, an anonymous senior government official called the Sidewalk Labs’ plan a “non-starter,” according to the Toronto Star.

“There is no way on God’s green earth that Premier Doug Ford would ever sign off on handing away nearly 500 acres of prime waterfront property to a foreign multinational company that has been unable to reassure citizens their privacy and data would be protected,” the source said to the Star.

Kristyn Wong-Tam, a Toronto city councillor representing downtown Ward 13, also tweeted – “A tech giant never having built transit [and] city infrastructure anywhere, or even pitched a dime for the $1.25B for Port Lands flood protection, has the audacity to stake claim for future land value, property taxes [and] development charges on land they don’t own.”

Earlier this month, it was revealed by The Logic that Mattamy Homes, a real-estate giant, was also quietly eyeing a development proposal for the Quayside. The company was part of a conglomerate, which also included OMERS and Manulife Financial, that lost to Sidewalk Labs in a request for proposal for Waterfront Toronto’s Quayside development.

In an announcement naming more details on the development back in November, Sidewalk Labs did not reveal to reporters anything more about how it plans to collect user data, something that it has been an area of criticism for months. It said it would collect data from sensors while residents are in the community, and that could come from traffic signals or garbage bins. The company also plans to collect data on citizens with the stated purpose of improving services, and at the time, Doctoroff said the company would not seek monetization opportunities for the data.

A number of consultants and advisory board members quickly resigned ater that announcement, citing concerns over how personal data would be collected and used, as well as the secrecy surrounding the project. Saadia Muzaffar, who resigned from Toronto’s Digital Strategy Advisory Panel in October, expressed “profound concern” with the “disregard for resident concerns about data and digital infrastructure,” in a letter obtained by The Canadian Press and The Globe and Mail.

The Toronto City Council still needs to approve Sidewalk Labs’ plan, which was initially due last fall, and is now scheduled to be revealed in the spring.

The Government of Canada is launching a new federal rent relief program for businesses amid the ongoing COVID-19 pandemic. Prime Minister Justin Trudeau and…