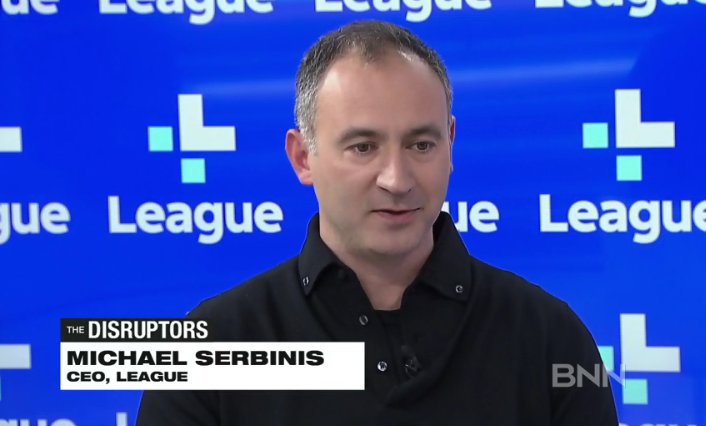 Last week on The Disruptors, co-host Bruce Croxon sat down with Michael Serbinis, CEO of the digital health and wellness platform LEAGUE, to discuss his plans to turn the startup into a billion-dollar company.

Serbinis, who is best known as the founder and CEO of Kobo, launched League after a $4 million seed round, and since then has raised an additional $32 million and partnered with RBC.

LEAGUE is a platform that allows small businesses to offer more customized benefits plans for their employees. Specifically, users can gain specialized access to medical professionals and schedule appointments.

During the interview with Croxon, Serbinis said LEAGUE’s business-to-business approach was crucial for the company to grow.

“We went to market with this idea of empowering people to be healthier with a consumer app that allowed people access to healthcare providers…” said Serbinis. “We’ve learned very quickly by following the money that it’s a B2B play. We go to small businesses and we say, ‘hey we’ve got a better way of doing health benefits or health insurance’, and it’s a no-brainer for businesses.”

Serbinis added that LEAGUE is popular both among businesses that already provide benefits and those that don’t, and that he plans to re-launch LEAGUE in the US by hammering out “the major metro areas” in 2017.

Croxon said that while some startups are contributing to the rise of FinTech by working with traditional banks, LEAGUE is building a platform that “totally disrupts” traditional healthcare. Serbinis said this mindset of disrupting the entire sector is important for the company to scale further in the long-term.

“[There’s] this whole idea of a life-optimization company, where I’m here to empower you to be healthy, I’m going to have a more cost-effective channel, which is a giant to the small business market and the traditional players,” said Serbinis.

When asked about future funding plans, Serbinis said LEAGUE will be raising funds in 2017, whether it’s doing great or not; his goal is to build a billion-dollar company in 2018.