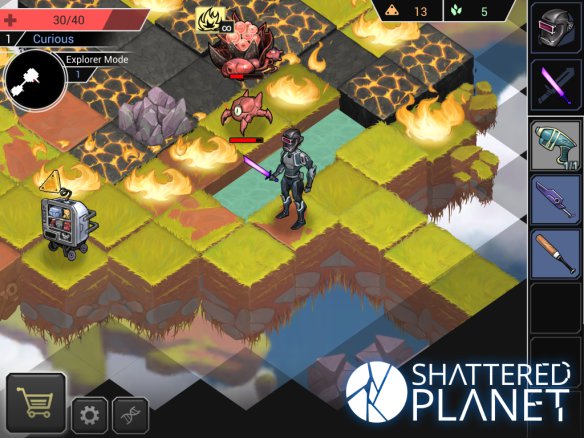 Montreal-based indie gaming studio Kitfox Games doesn’t want its titles to be easy to play. The 10-month-old firm started out in June 2013, born of out the Execution Labs incubator space, and shortly after it released its first title, Shattered Planet.

For CEO Tanya Short, a former employee of Funcom games’ Montreal office, Shattered Planet wasn’t going to be easy. “Originally we were unapologetic in our difficulty, we weren’t interested in making it like, ‘you’re so awesome, you’ve made it one step,’” Short told BetaKit. “It was always going to be hard.”

Shattered Planet is an exploration game where the user is a space captain exploring a planet that’s been blown apart into little cubes. The user must explore, finding new technologies and species. The game is a classic turn-based, randomised RPG, with “endlessly generated content” and dozens of differently powerful items to find.

“We pair the responsiveness and progression from modern randomised games like Rogue Legacy or FTL with the more traditionally intricate challenges of games like Rogue and Nethack. The art style has been compared to the award-winning Bastion, but the gameplay is more thoughtful and strategic, requiring planning sometimes dozens of turns in advance,” wrote Kitfox Games.

For Short it was also important to design the game through “procedural generation“, or designing various levels in an “on-the-fly” manner rather than with pre-made and pre-stored designs.

“We think that it’s the best way for people to really have their own unique experience in a game,” said Short. “A lot of people looked at Minecraft and thought, ‘ok, we should all make games about crafting and cubes,’ when really what they should have been thinking is ‘oh look, this is a game that’s letting everyone have their own experience and everybody plays the game differently and you can compare stories with your friends.'”

Kitfox also wanted to emphasis cooperation among friends while playing multiplayer in Shattered Planet. “Every game after shattered planet is going to have a strong cooperative element because I believe in playing with friends and I believe that makes even the simplest games way more fun.”

Shattered Planet is solely on iOS right now, but the team expects the Android release for Thursday, while a PC release is expected in the summer.

Kitfox games’ next title is called Moon Hunters, an open-world adventure for 1-4 players, solving ancient mysteries and building mythologies. They expect it to be out by next spring.

The team makeup is also pretty interesting: the four cofounders are all from different countries: Short is from the US while the remaining three come from Canada, China and Korea. Their names are Michael Ditchburn, Xin Ran Liu, and Jongwoo Kim.

CoreLogic announced that it has completed the acquisition of Toronto-based insurance claims software vendor Symbility Solutions Inc. that was previously announced in October 2018,…