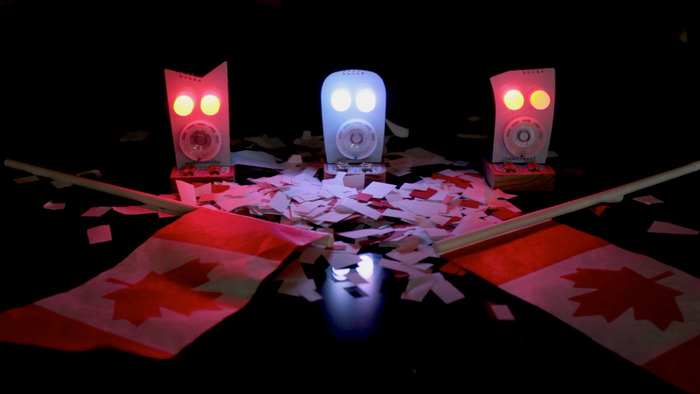 It’s been one week since Kickstarter opened its platform to Canadian projects. The crowdfunding site launched September 9 in Canada after firmly establishing itself in the US over four years.

Little Robots are cute, smart and customizable robots that can interact with the environment and each other. They seem to be primarily aimed at kids (but to be honest, I want a couple for my desk. When it comes to robots, the market is wide open). The robots can detect the amount of light in a room, hear with a small-integrated microphone, detect touch and also communicate with each other. The campaign, which launched September 11, has raised 175 percent of its funding goal of $55,000 CAD ($96,708 and growing). And they still have 23 days to go!

Toronto-based Aesthetec Studio is the team behind Little Robots. The creative technology company has been behind some big interactive projects here in Canada including TIFF’s Kids digiPlaySpace 2013 and installations at Nuit Blanche, Osheaga and NXNE.

The Little Robots was actually a project that Aesthetec Studio was trying to bring to TIFF Kids Festival this year, but other obligations got in the way of the project.

We sat down with Aesthetec Studio’s Mark Argo to learn a bit more about his crowdfunding experience so far.

BetaKit: Why did you decide to use Kickstarter?

Mark Argo: As a creative technology company, we are constantly coming up with new ideas, building prototypes, putting them up on shelves until they can be used again. For a while now we’ve wanted to take one of those projects and see if a crowd-funding campaign would give us the time and capital to focus on them.

At the beginning of the summer we began preparing Little Robot Friends as a crowd-funded project and that same week we found out Kickstarter was launching in Canada. It was just great timing, and we knew that by launching a Kickstarter project early on it would give us a bit of an extra bump in promotion. Although we really had no idea Little Robot Friends would be this popular.

BetaKit:  What does it mean to be part of the Kickstarter launch in Canada?

MA: For us it’s provided a ton of extra publicity. We knew there would be an extra focus paid to Canadian projects that launched in the first week, and we worked furiously, nights and weekends, to get our campaign ready to meet that goal.

Other Canadian companies have partnered with American companies to launch their projects on Kickstarter, but we never really wanted to take that approach. We have fully embraced the idea of doing all our production locally – electronics fabrication, graphics printing, wood CNC milling – and this is due to our pride in Canadian craftsmanship and the support we’ve received from our local, provincial and federal government. They do a really great job in helping small technology firms find solid footing and build into strong stable businesses.

BetaKit: What is you reaction to the success you have seen so far?

MA: We’re quite floored by the reaction to the project, and now we’re thinking about how to provide more value to our backers. We’re so very thankful for their support and want to make sure this project has a long lifetime.

After our project was fully funded in under two days we had to place limits on all our rewards to make sure we don’t get buried under the demand. We’ve worked on large production projects before, so we understand some of the pitfalls when you pass certain thresholds on quantity. Lead times on components can increase, there can be bottlenecks in the assembly process, and more units means more risk. We wanted to make sure our initial backers are taken care of first, then begin planning for a larger production run for other vendors worldwide. We’re already in talks with a couple companies.

Again – thank you so much Kickstarter community. Without you this wouldn’t have been possible!!

The Little Robot Friends project is not alone. Technology type projects have popped up from various cities around Canada on Kickstarter.

All of these have a while to go yet on their funding journey, especially compared to Little Robots, but they all show great potential and have time on their side.

Canadian projects are not new to the crowdfunding space. The Indiegogo platform has supported Canada as a valid campaign country since its launch back in 2009. This platform has seen successful technology campaigns like MUSE: the brain-sensing headband which raised $287,472 of it’s $150,000 goal; The Matterform 3D Scanner which raised $471,082 of it’s $81,000 goal; and the Minuum Keyboard project which successfully funded $87,354 from it’s campaign for $10,000.

Now that Indiegogo and Kickstarter are both accessible to Canadian entrepreneurs who have great ideas, we’re sure to continue to see some great projects coming out of Canada.

Who Can You Trust With Your Data? This Toronto Startup Wants to Help

Who can you trust with your data? That’s a multibillion-dollar question. Three years before Snowden’s plea to the global tech community at SXSW this week to…