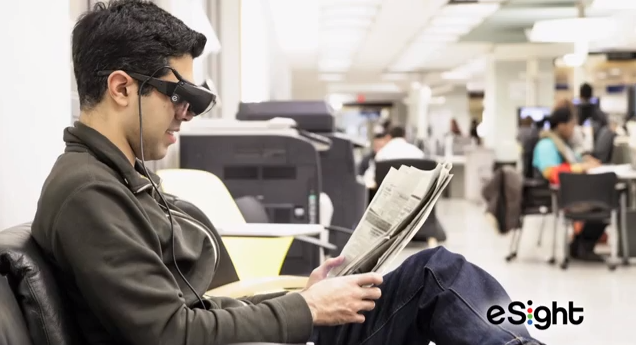 Wearable technology isn’t just all about counting steps and taking pictures. At the core, most of this technology is attempting to enhance human life. For Kanata-based eSight Corp. this is their entire mandate. This week eSight launched their smart glasses which enable people with low vision or legal blindness to see.

eSight eyewear uses an advanced, high-resolution video camera to capture what the wearer is seeing and then delivers those video images to a controller that acts as the computer. Users can then manipulate the images with the controller to zoom or change the contrast to help increase their ability to see. eSight has magnification abilities from 1.5x to 1.4x and up to six color modes to help the wearer read more easily. The processed images are then projected in real-time onto two LED screens inside the eyewear.

“When Kevin claimed that eSight eyewear could restore vision for people who had lost it, I was very skeptical,” said Bill McPhee, eSight Board Member and Boston Angel Harbour Life Sciences Director. “Many have tried. All prior to this time have failed. After all, how could a small little engineering company in Kanata make a tremendous leap forward where folks at where MIT and Oxford University have failed”.

Kanata does have a history of housing some of the greatest Canadian success stories in optical communications including Nortel, Newbridge Networks and Mitel. “All of these companies were experts at making photons, light particles do tricks in this case as the backbone of the internet,” McPhee explained. “It turns out that making light particles to do tricks was exactly the breakthrough thing that we needed to make eSight because we had to make light particles perform in such a way that damaged eyes could see again”.

eSight can digitally optimize video in such a way that awakens the remaining functional neurons (or cones). The eyewear then enhances the images which causes the remaining receptors to send an improved signal to the brain.

The World Health Organization reports that there are over 246 million people around the world with low vision or legal blindness. eSight was developed to help 75% of these people. The technology has been confirmed to assist people with macular degeneration, ocular albinism, diabetic retinopathy and other common forms of low vision and legal blindness.

eSight eyewear looks like a cross between the 3D glasses you get at the IMAX movie theatre and a sports goggle style similar to the Recon Jet. Right now there is a dependency on the controller which is about the size and shape of an old cassette player. Users carry the controller around with them in a pouch or bag. The controller also acts as the power source for the eSight eyewear which in itself doesn’t have a battery. eSight told BetaKit that they have planned on their roadmap to work on a smartphone application that could possibly remove the need for the controller but this is a ways out. In this way, eSight would work similar to other wearable technologies. But right now the team expressed that their focus is on getting the device out to market.

eSight is currently being sold on the eSight website for $9,750 for a limited introductory price as well as select low vision clinics across the United States and Canada.

While the August 14, 2018 Sidewalk Toronto public roundtable focused on Alphabet subsidiary Sidewalk Labs’ infrastructure plans for Toronto’s waterfront, there was a distinct…