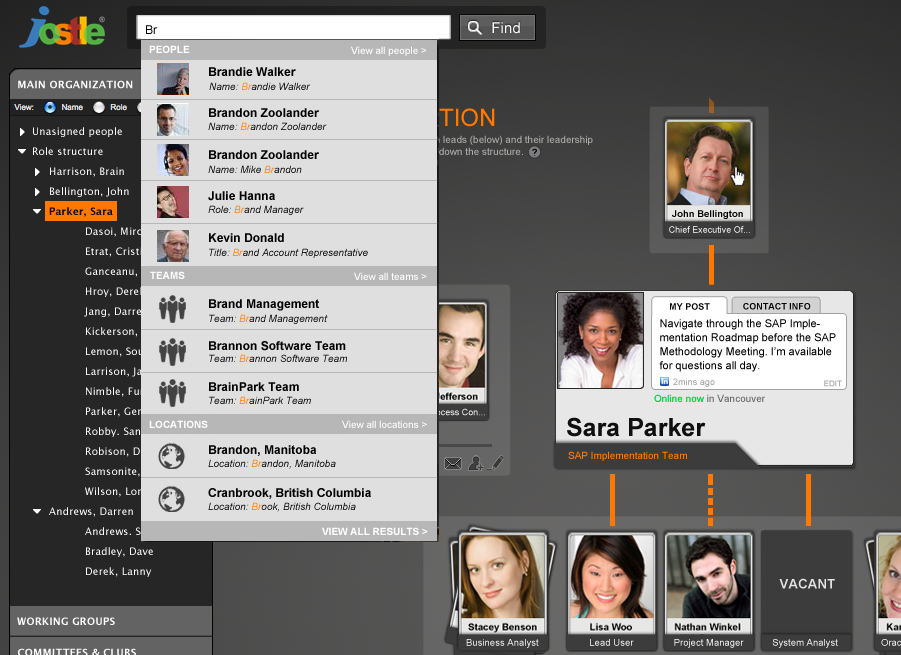 Since there’s been the Internet, there’s been corporate intranets. According the Jostle’s CEO and co-founder Brad Palmer “they’ve never really done the intended  job.” Palmer’s vision for what’s traditionally been the most under-utilized, and often ignored corporate web asset is for them to be simple, work relevant, and engaging.

For Jostle it’s about making people, and their organizations happier and more productive.

This isn’t Palmer’s first rodeo, as the grey hairs attest. Realizing he was ready to attempt another startup in Fall 2008, he spent a few months “systematically thinking, researching and brainstorming through a bunch of different ideas, most of which were killed in about 90 seconds worth of a web search.”

Leaning on his experience of leading and transforming large teams in a wide variety of corporate settings, it was the questions, “what have I done to create a strong organization? Why is it that teamwork happens and people feel motivated? What did I do to help people get their work done, and  help them realize their fit within the framework of the organization?”

“That established the core idea,” he said.

Palmer’s vision is using this foundation and creating a platform to scale leadership. As he says “the world has become more dispersed. It’s more mobile, it’s harder and harder for a leader to do his or her job by walking around. You just can’t anymore.”

He thinks leadership comes down to two things:

“These two things,” explained Palmer, “building the culture and enabling the employees are also what an intranet should do, so we’ve ended up in the intranet business and have been pursuing that ever since.”

This is a five-year “overnight success” story. Selling into the enterprise isn’t easy, and has been the death march for many startups. But 2013 has been a year where the customer base has grown to cover 13 different countries, with users in 45 different countries. Palmer pointed out  that 80 percent of social business intranet deployments are failing, whereas “averaged across all of our customers, we’re achieving consistently over 60 percent weekly employee engagement.”

The enterprise is often the embodiment of chaos, it’s constrained by legacy information, and an uncoordinated dance of different people doing different things, using different tools, and trying to deal with advancing technology. Palmer said that all of this noise isn’t going away. Rather, “it’s part of what a large collection of people working on something is, and it’s our job is to provide clarity above that,” he said. “There’s something magical about finding the right people, the right resources, or the right version of that document you need now.”

More importantly he believes there’s significant value in fostering discovery. For him, “the key thing is bringing together the unexpected. The biggest problem with innovation in companies is not coming up with the ideas, it’s not realizing that the ideas already exist in their company. It’s about getting the right ideas matched up with the right people, with the right vision to actually execute it through to revenue.”

He shares “for my experience working within the Kodak empire, lot’s was written about how Kodak died a miserable death because it didn’t have any ideas. That’s absolutely not true. Kodak had a huge development lab that was full of wonderful innovative things, that never got harnessed and commercialized, and that was fundamentally a cultural problem, it wasn’t an innovation problem.”

There’s no shortage of talk about the changing workplace, the shifting demographics, the impact of technology, and the extinguished notion that there are jobs for life.

From experience, Palmer knows there’s a big variety of management styles, and a huge span of employee cultures through their growing customers base, but the nuts and bolts are all the same. While he acknowledged that technology is changing, and the communications mechanisms are changing, the way people are dispersed is changing, so some of the challenges and stresses have gone up.

“A lot of our leadership challenges haven’t changed much since the 17th century. Sure some techniques have changed but the needs of the people haven’t really changed.”

Today San Francisco-based Referly announced it has closed $1 million in seed funding for its referral-driven shopping platform, from investors including New Enterprise Associates,…