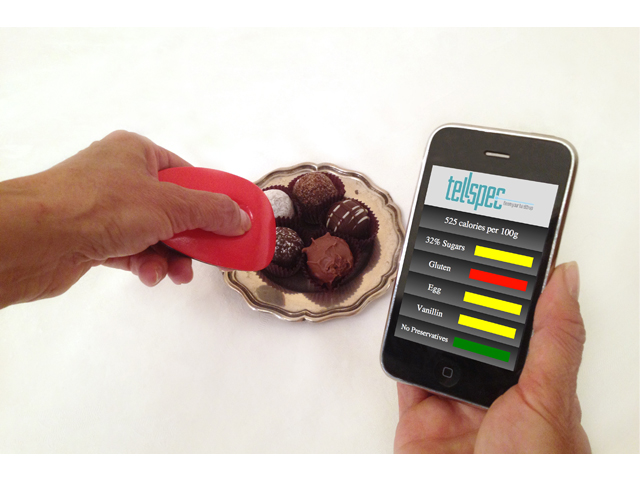 One of my favorite internet memes is one that says Star Trek has been predicting the future since 1966. And perhaps it’s true.

Captain Kirk was shown using a flip phone back in the original 60s series. Jean-Luc Picard often used something that looked like an iPad in the Next Generation version in the late 80s. And Benjamin Sisko, of Deep Space Nine, was rocking a Google Glass-like device in the 90s.

But if there is one device that Star Trek fans would love to see become a reality (outside of the whole “beam me up Scotty” thing of course) it’s the tricorder.

One Canadian startup wants to make the tricorder a reality – well, somewhat. They are focusing first on a tricorder for food. Their revolutionary handheld device, TellSpec tells you the allergens, chemicals, nutrients, calories and ingredients of the food you are about to eat with one single scan.

Here’s how TellSpec will work. The input device is a spectrometer scanner which in its current 3D model form looks a lot like the image below.  Users will point this device to scan their food. The data collected by this scanner is then sent to the TellSpec’s database in the cloud where their algorithm makes sense of what was recorded. Finally, the interpreted data is sent back to you in an easy-to-understand interface on your smartphone via the TellSpec app.

TellSpec’s main innovation is the analysis engine, not the scanner itself. They’re currently working with several optical companies who will build the TellSpec scanner for them since no such scanner exists today. At launch in August 2014, TellSpec will only be able to be used for food but co-founder Isabel Hoffman confirmed that the device will have the potential to do so much more.

“TellSpec will be used for food first because our database will be focused on food,” Hoffmann told BetaKit. “But the algorithm is independent of what is seen in the database. When we filed for a patent in the beginning of August, we put in all sorts of potential applications for this algorithm”.

Hoffmann said that developers have already reached out to TellSpec to discuss different applications for the device including being able to use it to analyze things like indoor air quality.

Despite the gathering and analyzing of food-related data aimed to help people with allergies and things like gluten-intolerance, TellSpec will not be sold as a medical device. Although Hoffmann stands by the integrity of her data, she explained that they are making users aware that major health decisions should not be based on what they learn with this device.

TellSpec is currently crowdfunding on Indiegogo to get the device out there in the market in order to start to grow their database so that it is ready for retail. Right now TellSpec is eating most of the cost of the hardware to get it in the hands of backers. In a recent Indiegogo update they explain that they do not plan to profit from the scanners since the cost of the spectrometer component is quite high ($1,000+ according to the update). Hoffmann told BetaKit that they expect a scanner like this would retail much higher than the $150-$300 backers perk price, possibly as high as $500 or more.

To offset the deficit on the hardware side, TellSpec will be charging a subscription fee for users to access the analyzed data from their food scans. Their current plan is $7.99 a month or $69.99 per year. Indiegogo backers will get a full two years of unlimited food analysis as part of their perks.

This business model does seem questionable but it’s all part of TellSpec’s plan according to their Indiegogo update.

“We are doing this because as people scan food, the analysis engine compiles the data and learns, and the quality and accuracy of the analysis improves. We want a critical mass of people scanning, so the product will be already excellent when it appears for retail sale. The TellSpec scanner will be manufactured by a partner optical company. We believe that electronics companies with optical expertise can build the best and cheapest scanners. Scanners suitable for TellSpec must meet our specifications and design, but they need not be made by TellSpec.”

Hoffmann told us they are looking to partner with device manufacturers to see if this type of technology could be embedded in existing devices. This strategy is a valid one but as the market is yet unproven this may be a long road for TellSpec. In addition, with the cost of spectrometers still so high, it is debatable how much people are willing to spend right now for access to this much insight into their food. TellSpec’s crowdfunding campaign will be a good test to see where the demand is at today. So far, the campaign has currently raised over half of the $100,000 goal with 35 days left to go.

Flixel Photos Gets $460,000 in Convertable Debenture from Cranson Capital

Toronto-based startup Flixel Photos, maker of the popular Cinemagraph Pro program for Macbook, has raised $460,000 in convertible debenture funding from Cranson Capital, a…