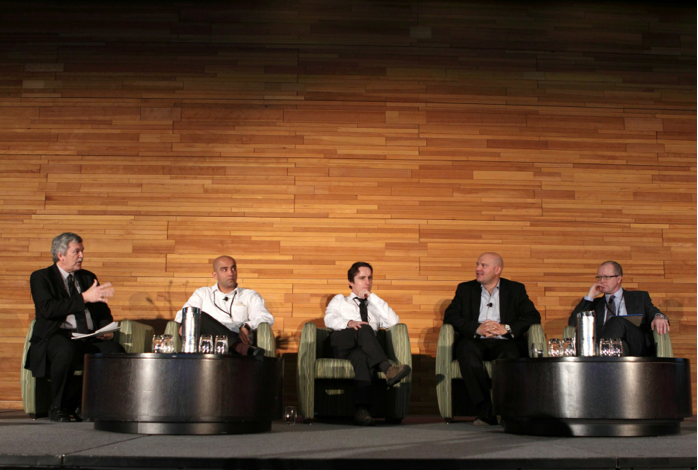 “The report of my death was an exaggeration.” James Tansey the Executive Director of ISIS, at the Sauder School of Business didn’t invoke Mark Twain when opening their first Clean Capital Conference in Vancouver. While clean energy investment has been in decline the past few years, it still saw $254 Billion flow into the sector in 2013. A decline in investment does not signal the death knell for the industry. These numbers don’t reflect the $6.8 Billion invested in Cleantech  for 2013. The space is rebounding, reloading and reinvigorating itself.

The sold out conference brought together entrepreneurs, investors,and business leaders from the clean energy and clean technology industries. Public sector policy makers who are charged with growing Canada’s clean economy were also in attendance.

This was a full day of dialogue about creating partnerships for Canada’s clean economy. For Tansey, “it’s great seeing lot’s of people in the room who are meeting for the first time even though they are all in the cleantech sector. Part of our goal was about bringing people together who don’t normally meet, and introducing them to some great content.”

In terms of content, Vancouver Mayor Gregor Robertson started the series of keynote presentations and panel conversations. Robertson highlights the role that Cities need to play in leading clean and green initiatives. He says “rather than boosting fossil fuels, governments should be working with industry to reduce them and the emissions they create.” Robertson’s green credentials and vision have also earned him an invite to participate at the C40 conference in Johannesburg South Africa. He’s Canada’s only mayor with that distinction.

Fresh off the recent $3.2 billion acquisition by Google, everyone appreciated the opportunity to learn more of the Nest story from their Director of Business Development Andy Baynes.

Having started with the thermostat and CO2 detector, according to Baynes, “they plan on reinventing all of the homes unloved devices.” As well, he offers that in the past two years Nest has saved an estimated 1.5 billion kilowatts hours of energy. That’s equal to taking four medium sized gas fired power plants off the grid.

The four panel discussions covered topics including, how cities can use their infrastructure and expertise to partner with the private sector to overcome the challenges in meeting their sustainability goals. Cleantech is key to environmentally responsible resource development, which is also part of Canada’s Economic Action Plan, was a conversation. With the US pledging approximately $80 billion, and the U.K $3,8 billion (GBP) to sustainable energy projects, it was fair asking where Canada fits on the global stage. Near and dear to every entrepreneurs heart was a good talk about financing the growth of the clean economy.

For cleantech and clean energy entrepreneurs knowing the Canadian playing field, and understanding how to effectively partner and collaborate is as important to success, as is having strong IP and accompanying value proposition. Ultimately, all of our social and economic issues and challenges surrounding climate change are Global concerns. Our entrepreneurs need global vision, as Merran Smith (director) of Clean Energy Canada notes “having participants on the panel I moderated had people from the UK, US, and China bringing us some of their stories of what they are doing,  I think Canada has a lot to learn. We are not even in the race to the clean energy future.”

In terms of provincial and national policies, our country might be eating the dust of other countries, but we do have great entrepreneurs who are very much in the game. The conference was more than talk, theory, policy, and money. Nineteen Clean Technology companies have been showcased. Here are the shows real stars.

In talking about building a business in this space the word stamina is popular. Without question, this industry isn’t for the short game minded..

Ben Sparrow (co-founder) of Saltworks took a few minutes, and kindly shares two great bits of advice for any up and coming cleantech entrepreneurs, “keep your head down and work hard. You’re not going to build your business by going to coffee meetings, presentations, or attending conferences. You’ll build your business by building a reliable product and getting a prototype that works. Secondly, you don’t have all of the answers, be open to advice, Learn to listen. Listen to your customers.”

As well, Jonathan Rhone (President & CEO) of Axine Water Technologies, strongly suggests to “be careful about betting your business future against the demise of hydrocarbon industry.”

Wrapping up the day, Michael Delage, (VP of Strategy and Corporate Development) of General Fusion presents an interesting energy perspective. He relates how a resource based paradigm is about exploiting resources, whereas a knowledge based resource paradigm is about exploiting innovation. It’s also worth pondering his question, “what will assets (oil, coal, gas) really be worth in a carbon constrained world?”

We’re in a global race of figuring out how to better use carbon. The only race that really needs winning solutions, is the human race. It’s entrepreneurs who are creating business models and business practices that are no longer about the extraction of value, but firmly committed to the creation of value is where we’ll all win.