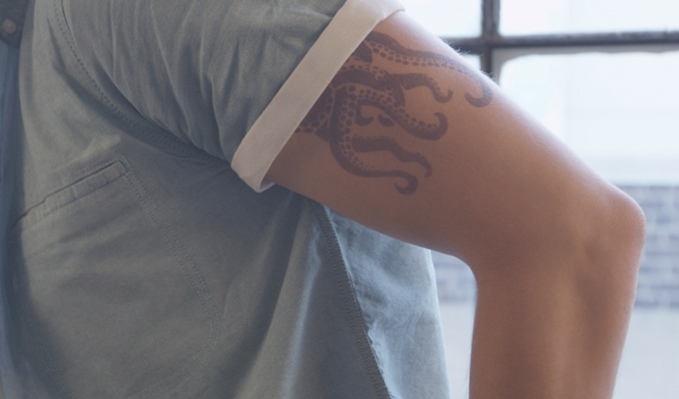 A year after brothers Tyler and Braden Handley launched a Kickstarter campaign for two-week tattoo company inkbox — raising $275,661 from 7,644 backers — the company has officially announced the close of its $1 million seed round.

“The appeal lies in having the right look and feel — which is most important for a tattoo — and not having to commit to it for a lifetime,” said Tyler Handley. “Temporary tattoos, up until this time, have always been stick and peel. They’re fun for children, but as an adult who wants to express themselves, it doesn’t cut it when you have a temporary tattoo that lasts a couple of days.”

“We have an insane amount of excitement from people who want to be able to create designs.”

The round for the Toronto-based company was led by KGC Capital, with participation from angel investors Marc Bell and Joe Roos. inkbox also attracted two celebrity investors: Jeff Probst, host of Survivor, and Emmy Award-winning actress Alison Sweeney, who starred in Days of Our Lives.

“I love the idea of expressing oneself in all ways, especially when they can change with time rather than being permanent. When I learned about inkbox and started to talk with Tyler about his vision for the company, I was excited to join the team and be part of the movement,” said Sweeney.

The company is planning on using the funding to expand their sales channels, focus on research and development for their tattoo technology — such as getting the tattoos to last longer and experiment with colours — as well as expand partnerships with artists.

“I’ve noticed tattoos are becoming increasingly popular, especially among millennials,” said Probst. “When we’re shooting Survivor I often think, ‘They’re going to regret this tattoo when they’re 50, why isn’t there a less permanent way to tattoo?’ I’m also health-conscious so the fact that it’s organic was another reason why I made inkbox my first startup investment.”

inkbox is mostly using the funding to develop a web-based platform, called inkbox [CREATE], that will allow users to purchase and request their own designs. While Handley said that the company had closed this round two months ago, they were so backed up with preorders that they couldn’t announce that they were taking live orders until now; the company has so far shipped 50,000 tattoos to customers in over 100 countries.

“We have an insane amount of excitement from people who want to be able to create designs,” said Handley. “When we launch, we know it will blow up very quickly. We need to make sure it’s a scalable manufacturing process, so that’s what we’re dealing with.”

inkbox tattoos are made from an organic, fruit-based formula. Handley and his brother discovered the formula from indigenous tribes in Panama, who had been tattooing their skin with the pulp of a fruit for thousands of years. “I found the tribe through a charity we support called the Darién Initiative. I had briefly heard of the tribe but in really searching for them I came across this charity who helped us import some of the fruit, and we fell in love with their mission down there,” said Handley. “They give back by exporting extracts of plants that grow in the jungle, and use those funds to support the tribe by allowing them to work for good wages without government interference.”

inkbox donates a percentage of every sale to the Darién Initiative, an organization that provides community and agricultural support to the Embera-Wounaan and Kuna tribes of the Darién Gap, Panama. Currently, inkbox tattoos retail between $19 and $26 USD, and the is planning to expand to in-store sales next year.