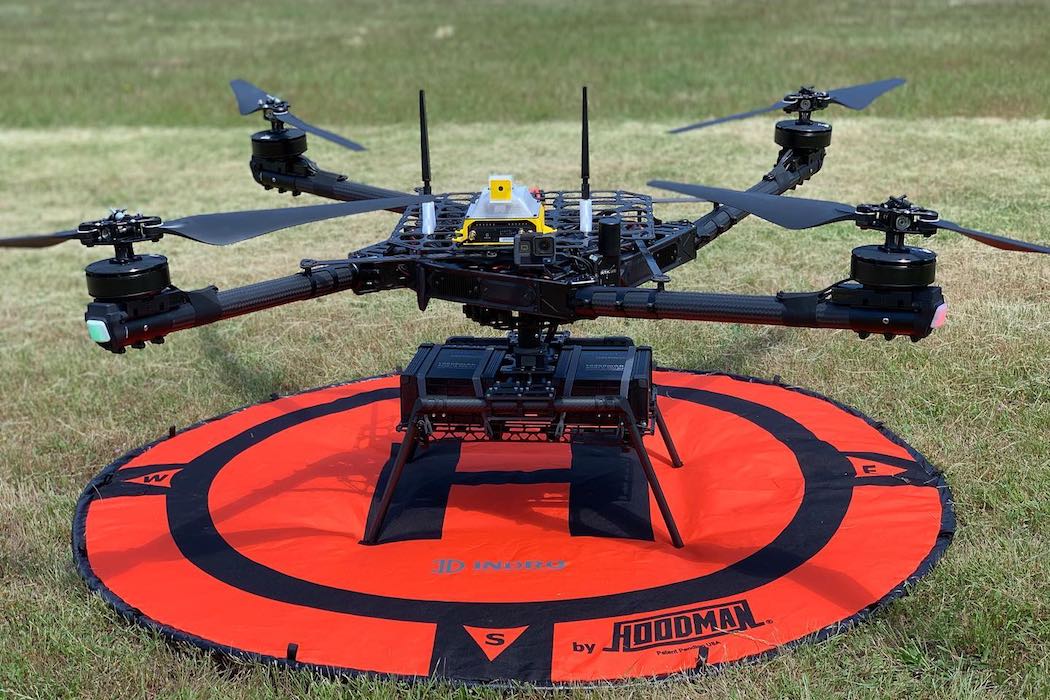 InDro Robotics, a drone startup based in Salt Spring Island, British Columbia, has partnered with telecommunications giant Rogers and the University of British Columbia (UBC) to research future 5G use cases for drone technology.

Through this new partnership, InDro Robotics will help research novel applications for drones that can drive positive societal impact, including agriculture sensors to limit pesticide use, wildfire prevention sensors, and large-scale multi-drone deliveries.

Founded in 2014, InDro Robotics develops remotely-piloted unmanned aerial, water, and land services as well as various mission-specific sensor packages aimed to address complex issues faced around the world. InDro Robotics also specializes in Beyond Visual Line of Sight systems, which refers to systems that fly drones at distances outside the visible range of the pilot.

InDro Robotics’ team consists of 22 drone and manned aviation pilots, and experts in remote sensing, IT professionals, engineers, and industry specialists. The startup has offices in Salt Spring Island, Vancouver, and Victoria, and also recently opened an office near Ottawa.

InDro Robotics founder Philip Reece told BetaKit partnerships like the ones with Rogers and UBC are what enable the startup to grow, and signal to investors that there is a long term future in drone technology.

Drones are typically operated using radiofrequency. InDro Robotics claims to be the first drone company in Canada to shift its connectivity approach from radiofrequency to a cellular network. Reece claimed that this approach allows it to control drones over further distances, noting its drones currently have a range of over 50 kilometres through Rogers’ cellular network. The startup is targetting a range of 200 kilometres in the near future.

“This allows us to fly anywhere where you’ve got cellular,” Reece told BetaKit. “So we could fly hundreds of kilometres down a path as long as we’ve got cellular. Ninety-six percent of the Canadian population is covered by Rogers’ network. That means we can fly pretty much everywhere.”

This is not the first time InDro Robotics has partnered with Rogers. The two firms recently completed an initiative that saw the firms use drones to deliver personal protective equipment to remote, Indigenous communities on Vancouver Island during the COVID-19 pandemic.

At the end of this latest partnership with UBC and Rogers, InDro Robotics hopes to go live with a number of new services.

InDro Robotics is currently working on creating a fully autonomous process for mail delivery. The project would develop a mail cluster box for a drone to land on top of and disperse items for people to later pick up. InDro Robotics is hoping to eventually take that technology to market for Canada Post to use.

“In addition, we are working with university professors to research traffic management systems to help manage communication and flight path contention amongst other use cases,” added Neel Dayal, director of innovation and partnerships at Rogers.

Rogers and UBC also have in place a multi-year partnership aimed to build a 5G Hub on the UBC campus. The hub is hoped to be a testbed and blueprint for 5G innovation in Canada. As part of that partnership, Rogers began deploying 5G-ready network equipment and infrastructure to UBC in early 2019.

“We all had common interests in the use case around Beyond Visual Line of Sight flight and 5G, the 5G smart campus was the ideal place to further this research,” added Dayal.

InDro Robotics is also the first drone company in Canada to receive a Canadian Transportation Agency licence to carry commercial goods. This licence, which InDro received on November 9, allows the startup to give its Heavy Lift Wayfinder Drone to ship increased cargo over longer distances. InDro Robotics also has extended distances approval from Transport Canada for 25 kilometres.

The startup continued hiring during the COVID-19 pandemic and expects to add six new team members next week, bringing its headcount to 28.

He wears many hats, and sometimes wears them all together. He is a golf disruptor, sports architect, and a podcast host. Originally coming from…