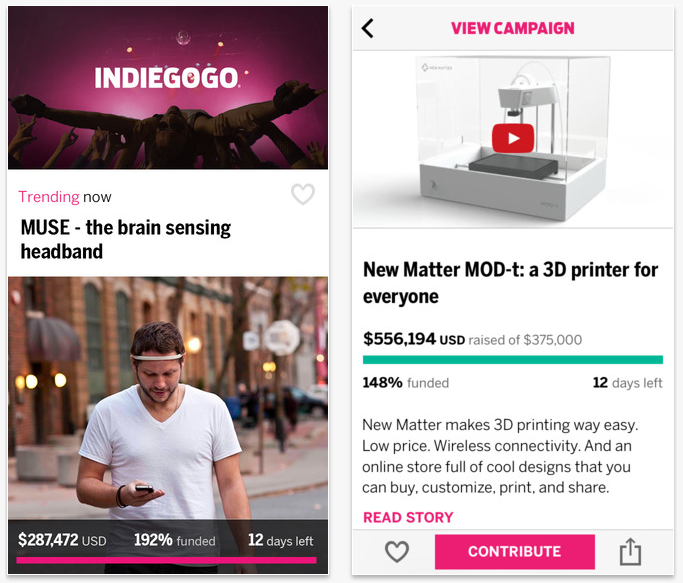 Indiegogo, the San Francisco-based crowdfunding platform, has opened its new app up to Canadians users first. The move comes as Indiegogo prepares for an international rollout after an initial testing period in Canada.

Canada is Indiegogo’s second largest market and has “strong consistent growth with a 50% increase in funds raised by Canadian campaigns over the last year.”

The Indiegogo app comes localized for both Canadian English and French, and will roll out globally in the coming months.

The app allows backers to search, support and share Indiegogo campaigns in various categories such as technology, health, art and photography. For campaign holders, the Indiegogo app brings the ability to fully manage and launch new projects from the iPhone, including the option to receive notifications when a contribution has been made, as well as manage comments, and post campaign updates with photos.

“Since day one we have been dedicated to providing our campaigners and contributors in North America and abroad with the best funding platform in the world,” said CEO Slava Rubin. “This year has been one of tremendous growth for us and we’re investing heavily to continue improving Indiegogo for mobile users globally. The Indiegogo iOS app is the first of many advancements focused on delivering the best mobile experience imaginable.”

This year, Indiegogo redesigned its website to make it more accessible on mobile phones and tablets, and it said global traffic via mobile doubled within the last year. The new mobile app will allow Indiegogo to add more functionality, added Rubin.

Indiegogo also noted that an Android app “is in development,” while the iOS app became available on the app store yesterday.