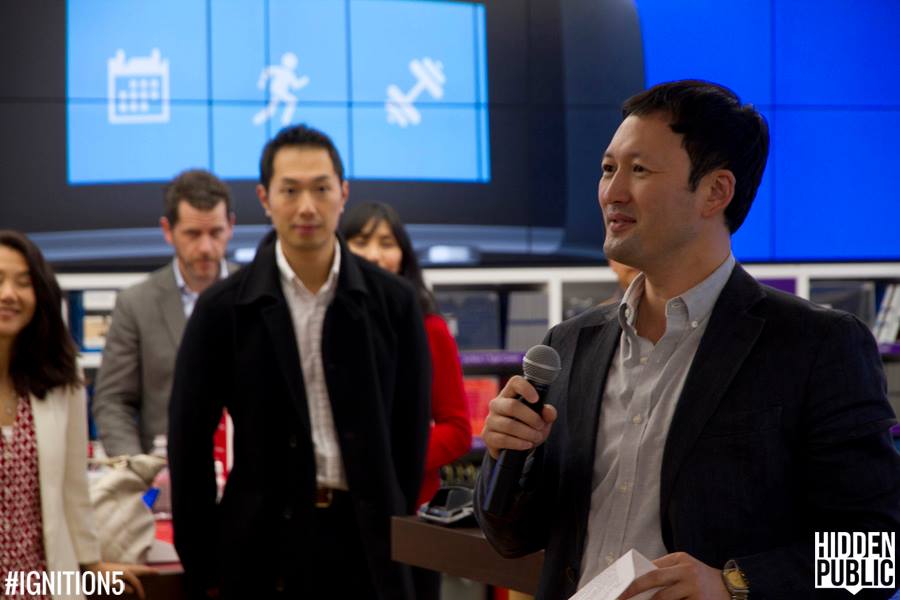 Smart, wearable health tech gear. Social media analytics visualization. Fully-customizable enterprise technology. These were just some of the tech treats getting showcased at the Ignition 5 event last week in Vancouver, hosted by LFG and Microsoft. About 50 people attended the event in the Pacific Centre Microsoft store, taking in some of the newest ideas on offer from the digital community, from iNu Software, Mentionmapp Analytics, the Intentions Lab, Fit Assist and eSports Pools.

“We see a lot of excitement in Vancouver on the tech scene, but also a lot of noise. There are a lot of incubators putting energy behind ventures that are possibly not even good ideas.”

“We’re celebrating the launch and success of local companies and emerging leaders,” said James Suk, VP of Technology with LFG, which partners with and provides a range of services for companies using technology and on those working directly in the tech sector. “We see a lot of excitement in Vancouver on the tech scene, but also a lot of noise. There are a lot of incubators putting energy behind ventures that are possibly not even good ideas, which can be a waste of time and money. Where is there real quality? How good is the team? What’s the idea behind it? That’s why we wanted to showcase this group, with a big range of technologies on the cusp of busting out.”

The presenters represented an eclectic mix of new ideas. Mentionmapp founder (and BetaKit alum) John Gray was on hand to show off his app that shows social media relationships in a visual way – something that’s long overdue for those of us tired of trying to make sense of more than a few streaming Twitter feeds.

“It’s about turning Twitter’s linear feed of conversations into a live, dynamic and connected visual experience,” Gray said. “We’re putting some awe into discovering the great stuff of the social web.” The technology is able to augment the things that people see with Hootsuite, for example, and make it better, without focusing exclusively on the numbers and bringing the focus back to human interaction, Suk added.

Mixing the entertainment, sports betting and technology sectors all together was eSports Pools, which presented its destination site for daily eSports Fantasy pools, “incorporating unique elements of intrigue and excitement for hardcore fans and casual spectators alike.” Closing in on 100,000 users and backed by significant funding and an experienced leadership team, the company seems to be gaining traction in what is a very big marketplace.

One standout tech innovator on display was WearCare, a smart wearable and alarm system that can be used for assisting with incontinence and related issues. “The real opportunity with the WearCare system is the ability of caregivers to set individual thresholds for the full suite of incon, body position, and movement functions being monitored, and for that secure data to be made available as part of a broad HER (electronic health record),” said Greg Foweraker, Director of Fit Assist Medical Inc. “This is an innovation for a growing need and trend as our demographics shift to an older population; the need to harness technology to provide positive outcomes for ageing in place.”

As Suk noted, a technology business like this is even more valuable “when it’s not sexy, because fewer people are doing it” – it’s an uncomfortable topic for people, but the market is so big. Where dignity of life is involved, “this has the opportunity to be huge, with a real-world application with tangible value that also has an emotional aspect.”