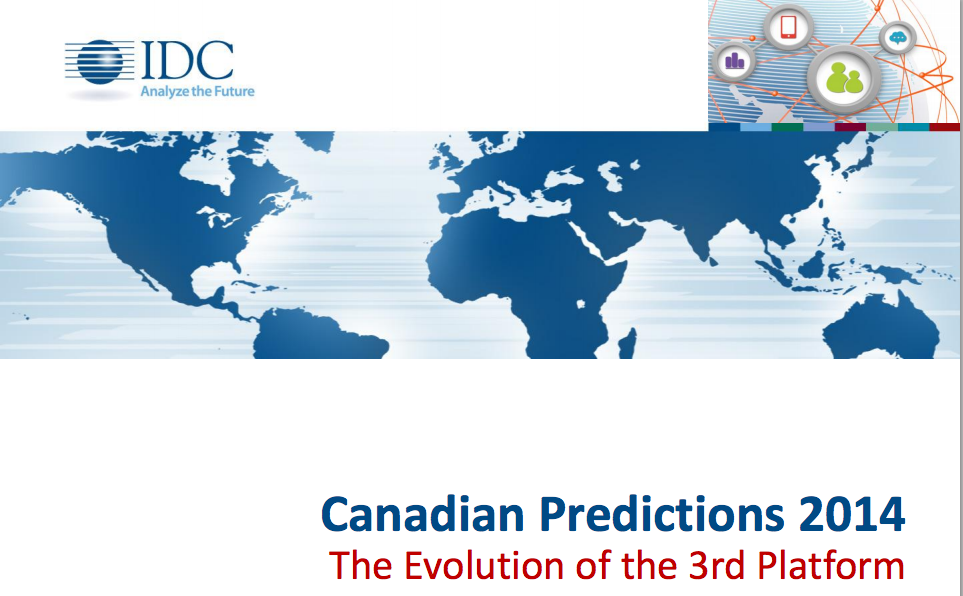 IDC Canada released its top ten technology predictions for 2014 yesterday via live webcast. The company’s predictions revolve around the shift to the “third platform”, or innovative industry solutions in social, big data, cloud and mobility. This has evolved from the “second platform”, or the legacy IT systems, like local area network (lan) Internet and servers.

Their top ten predictions include the rise of Android among enterprise clients, mobile payments, multiple device and touch screen use and much more. We only provided a glimpse of the impressive analysis that IDC performed for these predictions.

IT growth is up five percent worldwide in 2013 and the third platform will drive change in the new year, said IDC, impacted by cloud service providers, developers and “line of business” executives.

IDC Canada’s general manager Lars Goransson said that this year’s predictions are a combination of technology directions, market trends, structural changes, significant opportunities and strategic business choices that are relevant to our industry.”

1. Internet of Things (IoT) Captures the Imagination of Canadians with a Connected Car

IDC predicts that the Internet of Things (IOT) will have 30 billion autonomous connected endpoints in 2020 and will account for $8.9 trillion dollars in revenue worldwide. This promises to be a game changer for every IT vendor and it will redefine business processes and reshape many industries. The emergence of the connected car is just one example of many for IOT.

2012 was a big year for cloud computing as the market size went over $1 billion for the first time. In 2013 Canadian companies are spending over $1 billion dollars on SaaS alone. IDC doesn’t see this slowing down.

The “Snowden Effect” is the hypothesis that people will avoid moving apps and data to the cloud for fear of unwanted access. But from the point of view of business and corporations, IDC doesn’t think security issues will affect their decisions over cloud software spening. Line of business exectuvies are already firmly entrenched in cloud computing, while those who were critical of security issues before are now in favour of the migration to the cloud. By 2017 cloud will make up almost 6 percent of all IT.

One of the main attributes of a successful third platform company is the extent to which it can derive value from more than one of the key pillars. In that sense, the cloud is highly correlated to mobility. Among those who said cloud computing provides high value, 82 % said the same about mobility.

The intersection of cloud and mobility will accelerate new application value for those companies that choose to go beyond the basics, but just 13 percent of business deployed over three applications in 2013  (and many were still basic). The reality in Canada is that many of these companies will still be at the early stage, but a small group of companies will move beyond traditional email and CRM solutions and offer new differentiation and value for customers.

For mobile workers, there will be a rapid increase in collaboration. The business-to-consumer space will continue to transform as well. For example, banks are allowing people to take pictures of cheques to deposit them, while Walmart’s digital billboards with QR codes allow shoppes to swipe and buy products instantly.

Toronto is home to the Canadian financial sector, currently the largest user of outsourcing while western Canada is the fastest growing region for outsourcing as demand continues to outstrip supply.

However, the trail of dollars focuses on Ottawa, our nation’s capital. The federal government spends well north of $10 billion on outsourced tech every year. New data centres means the federal government will be the largest outsourcer in 2018, and the IDC predicts that $2.5 billion worth of contracts will enter the market between 2015 and 2017.

A Stanford professor once said “we tend to overestimate the effect of a technology in the short run and underestimate the effect in the long run”. True big data is in its infancy in Canada and we’re still lagging behind our US neighbours. We’re at the education and evangelism stage.

42 percent of medium and large firms have big data plans and the IDC expects big data usage to get more horizontal and vertical in solutions.

“Big data as a Service” will be a new opportunity at the forefront of tech.

first the peril of securing data.2014 is a turning point in adoption of big data and more companies are moving from the “sand box” to live use. But risk of security incidents build at a rapid rate, so spending on security in identity and vulnerability is catching up.

This means that there’s opportunities for ongoing advancement in analysis. Telus, CGI and the Herjavic group are among the canadian MMSPs leading the  leading the way into deep analysis and proactive security.

These accessories, and many more to come in 2014, will rapidly create opportunities for new services.

The mobile device has forever changed the computing landscape and IDC see’s multiple devices becoming the norm in business and at home. We’re at the cusp of the great inflection point, where tablets and smartphones outnumber traditional PCs, and techies should expect a big spike in touch-enabled PCs.

On the smartphone side, the vast majority will be touchscreen. 5.5 inch smartphones are expected to make up 5 percent of smartphone shipments by the end of 2013. In 2014 IDC expects to see continued healthy demand for small and large tablets and smartphones.

IT managers surveyed by IDC expect 31 percent of their employees to be using their own tables in 2014, which brings more demand to IT departments. Touchscreen also means increased cross-device use of apps.

9. Android Arrives in the Enterprise

Androids will be more commonplace in enterprise next year, as 41 percent of survey respondents said they were already supporting android in 2013, up 22 percent from the previous year.

Previous concerns about privacy and security held enterprise customers back, but the tides have changed. Employee support for Android, ease of use, brand credibility, and security solutions will lead businesses to reconsider Android.

Many of the higher-end brands like Samsung are providing a sense of comfort to enterprise firms. From a developer perspective, 79 percent of respondents were interested in writing for Android phone. Androids have huge potential in Canada where previously one brand dominated (Blackberry). Ultimately as android arrives in the enterprise, new opportunities arrive for stakeholders in the ecosystem. This is evolution in the third platform.

2014 will see all major Canadian banks launching mobile payment options. Initially these will be NFC-based and will use third party wireless providers to host the element on the sim card.

31 percent of Canadians aged 13 plus already use NFC-based contact cards for tap payments and over 30 percent of terminals in Canada are NFC-enabled. Meanwhile, 20 percent of customers are interested in using mobile payments. Mobile online shoppers show even more interest.

2014 will also be the year of the mobile wallet, but it will be off to a slow start. Several have already been announced, including PC financial’s with Loblaws. Multiple offers will initially cause confusion among users, and IDC expects only limited uptake in 2014.

Their research shows that banks are seen as the most trustworthy players for mobile wallet and mobile payments, so their runway will be large.

Expect to see some innovative cloud-based announcements towards the end of 2014: mobile carriers like Rogers are already looking at their own mobile wallet solutions.