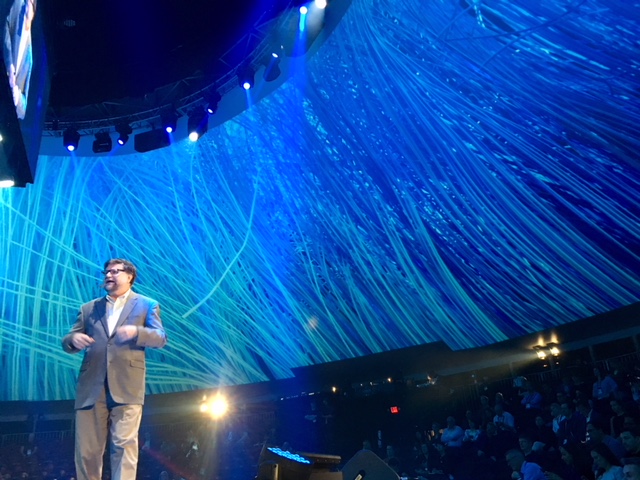 C2 Montreal is a three-day conference exploring the trends, disruptions, breaks, and new avenues in business and creativity through inspiring talks, experimental brainstorming, masterclasses, workshops, braindates, and many artistic performances.

During the conference, I had the chance to meet the brilliant and passionate Dr. Robert Sutor, an R&D executive responsible for the IBM Q program leadership for quantum computing, just before his talk at the Quantum Leap conference on the event’s main stage.

Dr. Sutor is currently the vice president at IBM Q strategy and ecosystem, IBM Research, and IBM Corporation in Yorktown Heights, New York. He is a leader and technologist with over 30 years of experience in various technologies, such as quantum computing, AI, blockchain, analytics, data science, and cloud.

What is quantum computing?

Quantum computing (QC) is not a replacement for classical computing; it helps solve some problems that classical computing just cannot handle. As an example, take the amount of information nature stores in a single caffeine molecule. It’s not a very large molecule. Imagine your cup of coffee or tea, there are billions or trillions of caffeine molecules in there, and I’m just going to take one of them. And freeze it for just one instant and then I ask you to tell me everything about its energy configuration.

There are algorithms that are designed for quantum computers that must be much more powerful, on the order of hundreds of millions of qubits. Such hardware does not exist yet.

The amount of information needed to describe this would be 10 to the 48 bits. In comparison, the number of atoms in the Earth is estimated to be 10 to the 49th, or 10 to the 50th. So. in theory, for the one single caffeine molecule, you would need a number of bits comparable to as much as 10 percent of the number of atoms in the entire planet. That’s not going to happen with classical computers. However, consider the largest quantum computers we currently have at IBM. These are 50 qubits — the basic computational unit in QC. You could represent that same caffeine molecule’s energy in 160 qubits exactly. And we are already at 50 now.

If all goes well, we’ll get to 160 and beyond into the 1000s and 10,000s of qubits. As we get more and more powerful machines, we’ll be able to make such calculations with other chemicals, molecules, maybe drugs for healthcare, or brand new materials. Those are just examples. There are other applications in AI, in finance, or in general optimization, too.

What is the current state of the technology?

The whole IBM Q team is developing the complete system and the hardware, in addition to whatever software is needed. We’re at the point where the machines are now usable. People can start thinking about new algorithms that are going to be necessary, and what applications these will really be used for, because it’s so radically different.

“This will be the most significant improvement in computation in the last century.” — @IBMResearch Robert Sutor (@snarky_android) about Quantum Computation as part of #AIForum #AI #C2M18 Day 2 pic.twitter.com/EiDmyJveEn

What is the state of the research?

There’s the whole ecosystem part. It’s not just a question of building the technology and hoping people will use it, we also have to make it available. Two years ago, we put that first 5 qubit machine, and then later 16 qubit machine on the web. We want people to have access to it. Since that time, we’ve had 85,000 runs over 4.4 million experiments. In addition to building this exciting new technology, we also ensure people can access it.

QC initiates a new era of chemistry! But it will be used more and more across a broad range of areas. If you’re studying QC now, you will be in the workforce in the 2020s, whether you become a software engineer or a scientist. This is a great time to learn.

Will quantum computing one day replace traditional computing entirely? Or should both exist in parallel?

At the time you need this sort of computational power for certain tasks, you’ll call off to a quantum computer, you’ll get the results back, and you’ll go on with your life using your classical computer.

Does quantum computing allow us to keep Moore’s law alive?

It’s not exactly comparable. The problem with Moore’s law is that when you go down to the chip level, you can only go so small. You start getting weird electronic interference because the parts in the transistors are too close together. However, when we think of the effect of computers on society, the fact that computers have been getting more powerful through the years has allowed us to tackle more and more interesting problems.

QC is fundamentally built on quantum mechanics, which is a very strange area of physics.

We, as a human society, rely on computers to give us these major advances. With Moore’s law, your question could be otherwise phrased as ‘are we done, will we no longer see these great improvements that we are so used to?’. Well, I do think that QC will keep giving us some of those possibilities.

Is it possible that some applications are being developed for hardware that may never deliver as expected?

There’s a long history to this, because QC is fundamentally built on quantum mechanics, which is a very strange area of physics.

That goes back to 1900s. There were great arguments in the 1930s between Einstein and other physicists about this, there are spiritual arguments about the meaning of quantum mechanics in the universe. Going back to the caffeine example. How does nature store that much information about one little molecule when we can’t, in all our wisdom, create a computer to do it. Something else must be going on. So there are scientific and philosophical aspects to this. There are algorithms that are designed for quantum computers that must be much more powerful, on the order of hundreds of millions of qubits. Such hardware does not exist yet. But we are only at the beginning.

What is your main focus for the next few years?

I’ve been at IBM for 35 years and this is the coolest thing I’ve ever worked on! You know, when you’re in business, you’re always introducing the new models, the next version. But how often do you get to introduce a completely brand new technology?

This is, in every possible way, different. My wish for the next years is to see more and more people use QC to solve existing and entirely new problems.