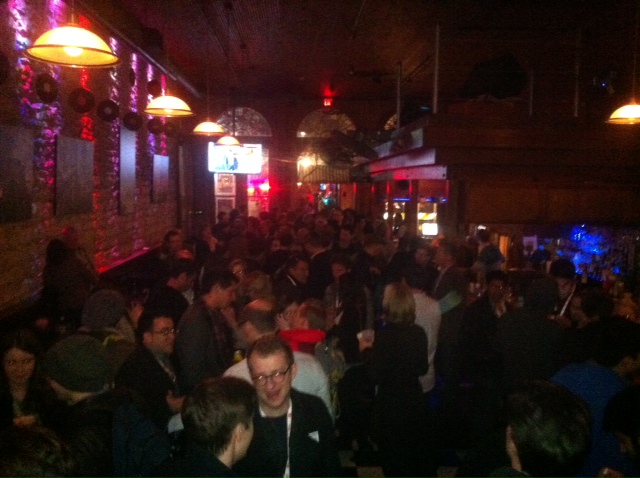 Far be it from me to contradict the wise words of Alec Baldwin in Glengarry Glen Ross (“Always Be Closing!”), but sometimes founders need to just relax and have a beer.

In boot camps and advisor sessions, startups are constantly being told that they need to outwork their competition: to hustle and sell non-stop to build up awareness of their product.

But let’s be honest: that can get annoying if it’s done poorly.

Before the madness of SXSW Interactive, I travelled to Austin for the SXSWedu conference. A few thousand developers, teachers and investors gathered together in one place to rethink the future of education.

As usual, startups vied heavily for attention from investors. Many came up with some ingenious ways of getting their attention (Exhibit A: Learning Bird made some awesome beer mats that were quietly slipped under drinks at the Edtech Canada After Party).

TakingITGlobal decided their opening would be a question: “what does your version of a future-friendly school look like?” They even provided a way for people to document their responses online.

One of my favorite techniques for making a new contact is to ask questions like this: “what trends are you seeing in the market?” “what kinds of education startups are you sick of hearing from right now?” “who have you met at SXSWedu that has really impressed you?”

When you’ve established a rapport and they ask you what you do, you’ve been given permission to proceed with your two to three sentence pitch. Good intro pitches are short and employ a good “hook”: an unexpected stat or anecdote that gets some-one’s attention, prompting that delicious response “tell me more…”

One of the best hooks I’ve heard comes from Raise Your Flag founder Ryan Porter who tells the story of a high school student who approached him in tears, after a motivational talk he gave.  “I started a company to solve Michael’s problem….” he says.  No one can resist asking for the next chapter of Michael’s story.

Angelique Mannella, CEO of Decode Global used the “show, don’t tell” approach at SXSWedu and had a tablet with her all week. “Do you want to play a game?” gets a lot more nods as an opener than “I have a startup…”

When a night drags on though, and investors have had a few drinks, the last thing they want to do is feel like they are the audience at your one-man show. At some point in the night, just relax and have a beer.

After all, investors are people who invest in people. People they like. And if you bond with someone on the subject of your kids, or your last trip to Rio, or your love of the rock band Rush, they will be more likely to remember you than if you just repeat your value proposition all night.

Some startups from MaRS in Toronto joined us at SXSWedu. eProf founder Evan Lewis ended up seeing a James Brown cover band in Austin, carefully collecting business cards for follow up in more sober times back in Canada.

Other founders ended up singing karaoke, playing shuffleboard, head-banging to heavy metal, trading Mardi Gras beads, and generally having fun, all with the deadly serious goal of increasing the size of their Rolodex.

That way, when it really is time to close a round of funding, they’ve got some friends they can call for advice, and possibly a cheque to put in the bank.

Joseph is currently an education advisor at MaRS. He also writes on issues of technology and culture for NOW Magazine, the Globe and Mail, Spacing and Yonge Street. He is the Executive Director of the Treehouse Group, dedicated to fostering innovation by hosting cross-disciplinary events.