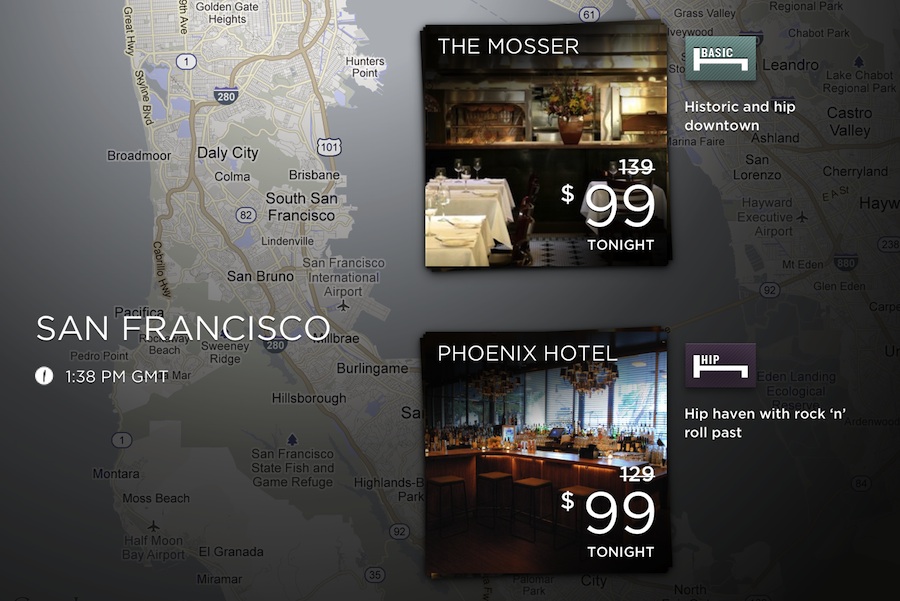 Today popular last-minute hotel booking app HotelTonight announced its launch in several European cities, including Paris, Nice, and Brussels, as well as its first Mexican launches in Mexico City and Acapulco. In addition to the international launches, the San Francisco-based company is also releasing new localized versions of its iPhone, iPad and Android apps, with support for languages including French, Italian, and Spanish. The company now offers bookings in over 70 cities around the world.

The company launched its first overseas version in the UK in time for the London Summer Olympics, and also opened an office in London to support the expansion. This marks the first time the app has provided versions in languages other than English. Users in new locations can now view and book hotels in their local language and currency, with support for Euros, the British pound, Mexican pesos, and the Canadian and U.S. dollar.

Founder Sam Shank said the ultimate goal for HotelTonight is to launch in every major international city around the world, and that mainland Europe was one of the company’s biggest goals (they had already launched in Ireland and Britain). “Getting into mainland Europe was a big goal of ours to accomplish before the end of the year,” he said in an interview. He said they started working on the European city launches when they opened the UK office, and have worked on translation and adding local content since the summer. “We worked with a lot of people who are locals who really understand the local voice to both port over and translate, but also redevelop the HotelTonight voice so it resonated with the local markets.”

To support the international launches, the company has partnered with local properties, including Le Burgundy in Paris and The Dominican in Brussels, letting users book same-day deals at a discounted rate. This European launch puts the company in direct competition with French company ReallyLateBooking, and Spanish last-minute booking app Blink, both of which have large presences across Europe.

“Launching an app and getting hotels involved isn’t necessarily the hard part, the hard part is scaling the operation across currencies,” he said. “Doing that and keeping the costs under control, the quality and experience high, keeping all the partners happy, it’s not easy.”

With over $35 million in funding since its January 2011 launch, the company has had over three million downloads of its apps, though it hasn’t disclosed any numbers around revenue or number of rooms booked. It also made its first acquisition this year, bringing on the team behind members-only restaurant deals platform PrimaTable in October to build out the backend yield management system. Shank said the PrimaTable team is currently working with the company’s data to optimize bookings and improve personalization.

In September the company launched more personalization options, and so in addition to expanding its footprint geographically, it seems to be working to make sure its deals are relevant to its base of over three million users. To encourage new users, the company also introduced Gift Credits today, letting users gift increments of $25-$250 by sharing a promo code.

Shank said despite the continued international push, they don’t have any plans to open other international offices at this time, and he was tight-lipped about priorities for 2013, beyond launching in other cities. With a steadily growing user base and now apps suited to local travelers, the company is poised to win over users in these key European and Mexican markets. Whether it can also fend off local competition is another question, so time will tell if it can become the number one last-minute booking app in its new cities.

Demeure, a Waterloo-based online travel marketplace that launched publicly last week, recently announced that is has raised $4 million to help compete against vacation…