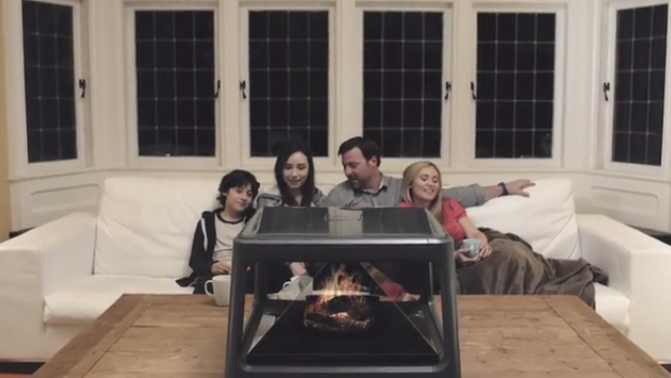 When you can pick up $50,000 through crowdfunding on Kickstarter, you might be on to something. H+Technology’s campaign for its Holus 3-D “Star Wars”-style interactive tabletop hologram technology managed that feat in just 90 minutes. As of this writing, Holus has more than tripled its initial goal, with $184,000 pledged from 240 backers – and 28 days to go of a 30-day campaign.

With hours to go before a party in Vancouver meant to kick off the campaign, I chatted with a calmly upbeat H+Technology CTO and founder of Dhruv Adhia about what the company is trying to achieve with its disruptive product: nothing less than to “humanize technology” in an entirely new frontier.

You’ve talked a lot about ‘humanizing’ technology with the Holus. Tell me what you mean by that.

When we started in 2012, we were looking to design a system that would overcome the barriers that keep us from communicating in a natural, human way. We’re bridging the gap between human and machine – and also the gap between generations. It’s about making it easy to use, whether it’s me or my grandmother using this. Ultimately, we’re creating a system that can adapt to human behavior, rather than the other way around.

Clearly, Kickstarter was the right move. But looking back, why did you go there rather than a more conventional model for raising funds and developing Holus?

Kickstarter is a great platform for raising money, but our main priorities were to raise awareness and build community. We wanted to understand more about Holus – about what our community want it to be. The future of holography is very new. Right now, we feel confident about the state of our technology, but there are areas where we feel it could be improved. The feedback is critical. We try to follow the LEAN methodology, listen to the critics and see where this needs to go.

What can other startups learn from the kinds of technical and business hurdles you’ve overcome?

It’s been a long journey. As we were developing this 3-D gestural system we realized that we’re interacting in three dimensions with a flat, 2-D screen. From there, we recognized the challenge was to interact more naturally.

We also had to rethink our development as we considered the size of the Holus. The image that comes from a smartphone or tablet is not a big image. Our early feedback told us that the size needs to be bigger, so the image and information is right in front of you. We prototyped many optical systems as we hit a wall, needing to magnify the image much larger than its original size – without losing the quality.

Another big challenge was just keeping the Holus’ price down to under $1,000. When you get pricing into the $850 to $950 range, now it can be mass-manufactured for a large audience. It let us tap into an existing manufacturing process. This was a big challenge – and the whole journey took us two years.

You’ve said before that one of your biggest challenges is forging a path through an unexplored tech space that few understand well – but it seems that latching on to the Star Wars theme (alluding to R2-D2’s famous hologram scene) has helped your backers to get the concept of what you’re trying to do. I’m sure it doesn’t hurt that Star Wars and sci-fi fans generally seem to be pretty active on Kickstarter.

Absolutely. Our generation has grown up looking at the future through holograms, in Star Wars and also in movies like Iron Man 3. These films have helped define the strength of this kind of information medium. People can relate to the experience. It’s the beginning of that era.

A study commissioned by the Canadian Marketing Association (CMA) has revealed a lot about how Canadians feel about privacy policies. The data, collected from…