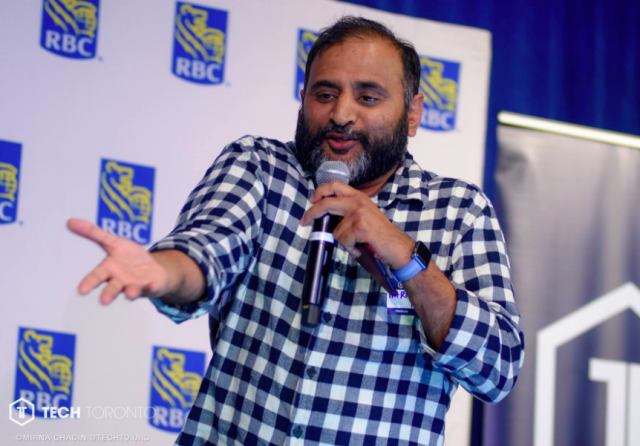 Monthly meetup TechTO is an outlet for founders and startups to engage in open conversations about their entrepreneurial journey. At the latest event, Harinder Takhar, CEO of Paytm Labs, shared tips from his story.

“Why not right now? Why not tomorrow morning? It’s almost like people aren’t prepared for good things to happen to them.”

Takhar started the consumer brand of his business, Paytm Labs, in 2011 with a board that was vehemently against the idea because they hadn’t seen a single business transition from B2B to B2C. Today, he runs a company that has 4500 employees and has just approved approximately $10 million in monthly marketing budgets. In an evolving system where B2B companies are now simply referred to as consumer businesses, Takhar is not afraid to break the rules.

With experience working in a variety of areas including telecommunications, marketing,and now financial services, Takhar recently opened a Toronto office dedicated to data sciences and launched a Canada app in March.

“I went to a few meet-ups, like this one, and I found that there were so many smart people and so many great Canadian things that they didn’t know how to celebrate or even acknowledge to themselves. There is such an arbitration opportunity,” he said. “Every company in the West wants to go to the East, every company in the East wants to go to the West. Over here people are impressed by the 1.2 billion people in India and they say it’s such a big market, but they forget that an average cell phone bill in India is $2 a month. When we came here we found that we might have had 500 users the previous day, but people pay $70 per cell phone bill.”

Takhar reminds startups over and over again that success is dependant on ambition, not just knowledge.

“I told you earlier that we are a 6-year-old company, we had no idea about payments or financial services when we started. I confused the acquirer and issuer words in the earlier part of being the CEO of Paytm. Can you imagine that I was running a payment company and I didn’t even know what a processor was,” he said.

According to Takhar, your priorities decide what you will become and speed should be a priority for all startups. The first person he hired that had experience working with credit cards was in February of this year and two months ago Paytm launched its credit card in India.

“As I walked out here I came up with this idea to create a promotion code: TechTO. I actually slacked my team in the channel saying, ‘hey we should do a TechTO promo code, which gives users $50 after they do a payment. Before I boarded the stage, I decided I would get it done. And now it will be a 24-hour promo code,” he said. “The reason I’m giving you these examples is that I take pride in the fact that we are so fast and that we can do these things at this speed despite the fact that we are a ‘bigger company’.  Most people that I talk to are pumped up about the ideas and then when I ask them to meet up they say, ‘how about next week?’ Why not right now? Why not tomorrow morning? It’s almost like people aren’t prepared for good things to happen to them.”

See Takhar’s full story in the video below:

Applications are now open for the upcoming AccelerateAB 2015 Roundtable Sessions, which is taking place in Calgary on April 28th. The Startup Roundtables Session…