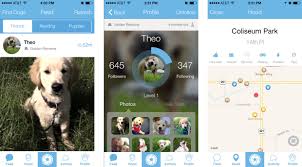 Guelph-based startup Woof recently released a new app for the dog-owners community and already it has struck a positive chord with iOS users.

Cofounder Dan Seider, 22, said that since Woof launched about two months ago, over 150,000 dog photos have been uploaded by about 24,000 users. The University of Guelph student called it a sort of Instagram for dog lovers.

“You can go into the neighbourhood and see nearby dog parks, you can track your walks to see how long you go, how far you go and how that changes over time and you can ‘mark’ your dog’s territory while on your walk: it drops a pin on the map and it allows you to see where all the dogs are in your neighbourhood,” said Seider. “We’re also working on the best way to allow dog parents to meet up with other dog parents in the neighbourhood.”

The idea came about a year ago while Seider was walking his five-year-old Goldendoodle Chuck. Seider thought about how the relationships dogs have with other often centre around, well, the spots in which they relieve themselves. He said he thought it would be cool to know where other owners’ dogs have been so their owners can both have a better understanding of their dogs and achieve a closer relationship with them.

“Really weird idea, I know,” he said. “But I started asking other dog parents what they wanted, I entered an entrepreneurial competition at Guelph, we won that, and then I went to a startup summit where I met my two cofounders Adrian and David.”

Since then, as Seider said, the trio has been “woofin’ away”. Joining him in the startup are Adrian Domanico, 22, and David Elsonbaty, 20, both students just a short drive away at McMaster University.

As the cofounder explained, the app allows users to share photos of their dogs via profiles, see nearby parks and track walks.

Currently the trio is trying to raise a small seed round with the hopes of moving down south to California for a short period of time. With a bit of capital they plan on releasing the app on Android.

In the short term, they’re already planning on releasing new features like video sharing, a meet up function that allows dog owners to meet with other dog owners in their area, and also an Ontario SPCA-sponsored function. The app could match prospective dog owners with dogs up for adoption at their local SPCA.

It’s an exciting time for the guys at Woof, especially after Seider won $5,000 at an entrepreneurial competition at the University of Guelph.

He said even though there’s likely tons of similar apps out there, they have their ears perked to what’s important.

“We spoke to 1,500 dog parents before we even wrote a line of code, we’re really listening to what the dog community wants and that’s our main differentiator.”

Ottawa-based Snowed In Studios, which provides engineering and co-development services to the video games industry, has been acquired by Keywords Studios. Founded in 2010,…