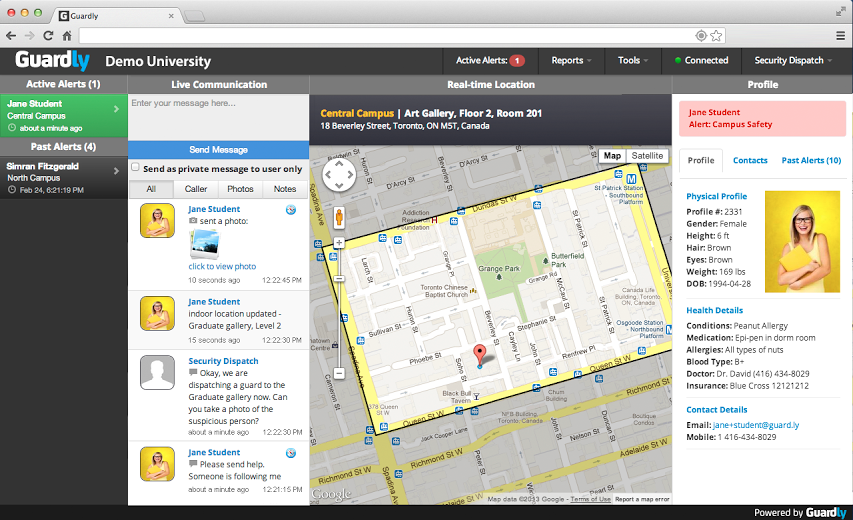 Big brother is headline grabbing these days. The mass surveillance state is a serious concern. Our social narrative now reads, Privacy Lost. On the other hand, there’s the less distressing story of Safety Found. Technology can both giveth and taketh away. In the case of Toronto’s Guardly, they’re using technology to firmly position people at the centre of the safety and security universe. They’re giving people a strong sense of wellbeing.

It’s worth noting that Guardly has been licensed for use by over 430,000 end users, such as employees or students which its enterprise clients have a duty to safeguard.

Guardly’s founder, Josh Sookman talked about safety, security, technology, and the business on the heels of just announcing having raised $1.45 million in seed financing. The financing was led by San Francisco-­based Freestyle Capital, with participation from Golden Venture Partners and MaRS Investment Accelerator Fund.

Sookman says the genesis of founding Guardly, “was trying to understand the key attributes of mobile. What really differentiated mobile applications, services and platforms from their web counterparts. It was the notion of real time location, and the ability to save time that was critical. I started daydreaming about how best to optimize these two characteristics. The notion of emergencies, and innovating on the way emergencies are reported and responded to grabbed my attention. Knowing exactly where to go is critically important. This laid the foundation for much of what we are doing.”

The next big question that needed focusing on, was how to make location more accurate. For instance, Sookman offers that “in some Fortune 2000 corporate travel security situations, the most accuracy they have on their employees location is based on an itinerary that the travel companies have provided to global security operations. Security amounts to a static data point on a plan. GPS has limitations too.” It was these two factors that pushed Guardly towards developing an Indoor Positioning System for mobile safety apps. This is now providing first-responders with building, floor and room-level accuracy of emergency callers in under 5 seconds.

Like most startups, there’s numerous ah-ha moments. Those moment often lead to some kind of re-positioning. For Sookman the big decision “was moving the business away from being the “On-Star” for consumers. We realized that enterprise security had to deal with issues beyond loss prevention and asset or building security to include the severity of workplace violence and harassment. A lot of existing technology doesn’t identify an individual or real time location when there’s a threat. At the time most of the technical infrastructure wasn’t integrated into mobile devices either.”

Deciding to make the transition from a consumer application to the enterprise really became clear he says “when at a huge industry trade show in 2012, we saw first hand the gap in mobile solutions. There was even a bigger gap between human interface and interconnection with the technology of the day. Our background of first being a mobile consumer play, really helped us see the responsibility we have is protecting people first.”

Guardly is focusing on improving functional issues and risks that legacy technology solutions pose on their users and customers, such as:

• Not having any mobile device capable of two-way crisis communication and notification.
• The need to charge and carry secondary devices to initiate emergency alerts.
• Having to seek out fixed emergence help points when time is of the essence.
• Inaccurate or non-existent GPS or indoor location data.
• Location data being provided to security operations too late.
• Significant delays with third-party managed services reporting incidents to corporate security.

For Guardly, it’s been timely and significant for developing the business by having the right technology, the right “stacks”, and the right devices now in place. Sookman adds “we’ve rethought and re-imagined how people can trigger alerts, how to add indoor positioning capabilities, how the better deliver mass notifications to people base on where they are. It’s been all about improving the user experience, in arguably times of significant duress.”

While they can’t prevent the next school or shopping mall shooting, nor fire from raging through an office complex, the Guardly system will go a long way to mitigating the potential for additional loss of life and injury. It’s all about delivering fast, accurate, and responsive communications for people needing the attention of campus or corporate security operations.

Start Alberta has revealed the winners of the third annual Start Alberta Tech Awards, which was held virtually this year. The awards recognize both…