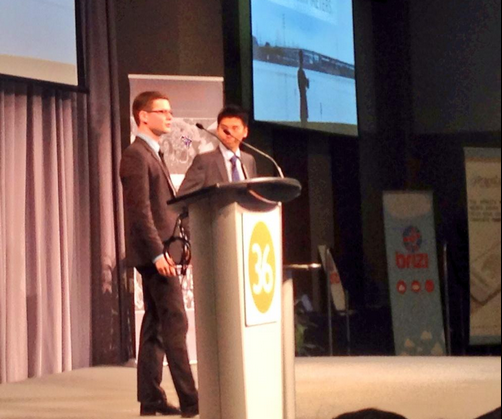 GridCure, a platform looking to be the simple, off-the-shelf analytics package to allow utilities to do more than simply bill customers for the power they use, was named the Next36‘s most outstanding venture at the Toronto accelerator’s Venture Day.

Venture Day marked the culmination of a “gruelling and intense eight month program,” designed to launch new businesses, and cultivate a 36 of Canada’s most promising young entrepreneurs.

Over 250 investors, mentors, donors and supporters, were at the MaRS Discovery District, where 23 venture pitches from the flagship program of The Next 36 and also The Next Founders – the organization’s second initiative for the founders of more mature startups seeking entrepreneurial education and access to networks.  The latest cohort saw startups in sectors ranging from healthcare to energy to retail. Read Also: The Accelerator Series- The Next 36 Anthony Lacavera, Chairman and CEO of Globalive Holdings and Wind Mobile, discussed his entrepreneurial journey and shared advice for “taking on the large incumbents” in his keynote address.   Top ventures and entrepreneurs were honoured with the following awards:

“There is nothing else out there that gives a young founder the calibre of resources that The Next 36 provides,” said GridCure’s CEO Jefferson, an Integrated Engineering graduate from the University of British Columbia. He served as the program’s valedictorian. “I’m here because I’m sitting with 35 people who have a pretty good chance at changing the world and I want the opportunity to be part of that.” The Next 36 has had four cohorts thus far.

These included Stephen Lake and Scott Greenberg of Thalmic Labs, Cheryl Cui, a Harvard-MIT PhD candidate, and Saumya Krishna, a Rhodes Scholar. Applications are open for young entrepreneurs who wish to be part of the 2015 cohort of The Next 36.  This year’s early application deadline is September 30, 2014.