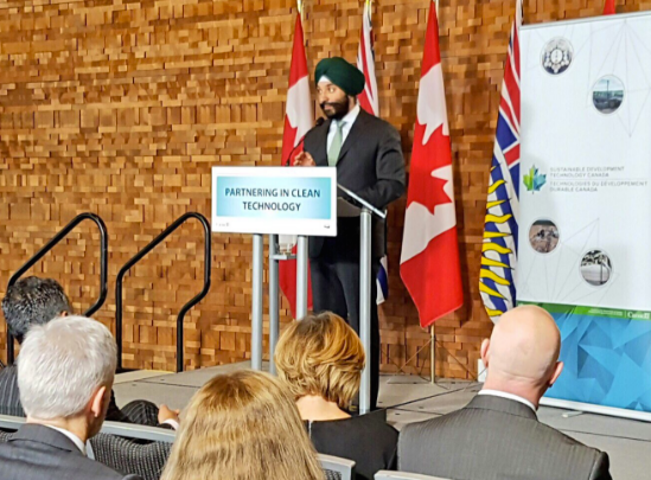 The federal government announced that it is contributing up to $45 million in BC-based clean energy projects.

The federal government will make an investment of up to $20 million with matching funds from the BC government in clean energy projects at the pre-commercialization stages. The initiative will target companies with innovative projects at the prototype, field testing, and demonstration stages, with applications opening in April 2017 on Sustainable Development Technology Canada’s website.

Proud to announce $43M for #cleantech in BC that will create opportunities for businesses to grow & contribute to clean economic growth #yvr pic.twitter.com/db3zl36vD9

The government also announced investments in two BC-based cleantech companies through SDTC. This includes a $10 million grant to the Automotive Fuel Cell Cooperation, which is working on technology to reduce the difference in cost between fuel cell and combustion engine vehicles; and a $13 million grant to Canfor Pulp Products, a global producer of pulp and paper products. The government calls the company one of North America’s largest green energy producers.

“Our government is proud to support Canadian clean tech and advanced manufacturing companies like AFCC and Canfor,” said Navdeep Bains, Minister of Innovation, Science and Economic Development. “Through innovation, these two firms will make great advances in energy efficiency, leading to lower carbon emissions, healthier communities, and a cleaner environment. Our government will continue to work with partners to invest in clean technologies that lead to better jobs, better opportunities and a better living standard for the middle class.”

Bains first announced the government’s commitment to cleantech in March 2016, when he announced that the government will dedicate $130 million over five years to specifically support clean technology research and development.

The Biomedical Zone (BMZ), a healthtech incubator produced in partnership between Ryerson University and St. Michael’s Hospital, has partnered with Shoppers Drug Mart for…