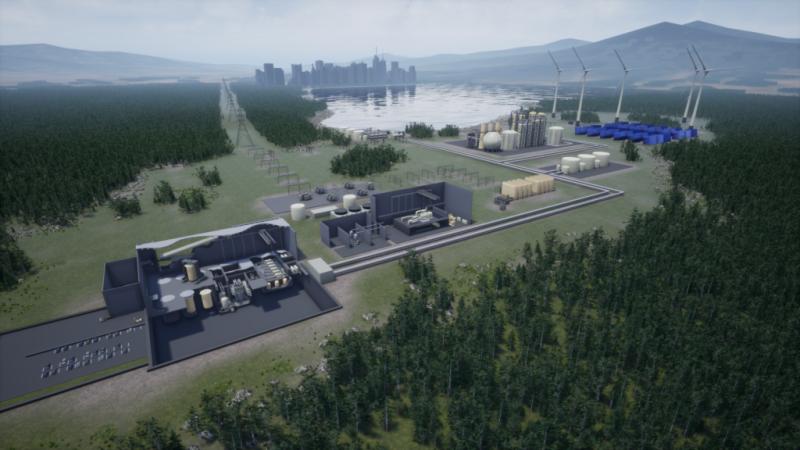 Oakville-based nuclear tech company Terrestrial Energy has received a $20 million commitment from the federal government to aid in the development of the company’s small modular reactor (SMR) technology.

“This is our moment to shape the next wave of nuclear technology and move to the frontlines in the battle against climate change.”

Minister of Innovation Navdeep Bains and Minister of Natural Resources Seamus O’Regan announced the funding on Thursday. The capital is provided through the Strategic Innovation Fund (SIF) and is meant to help Terrestrial Energy complete a key pre-licencing milestone through the Canadian Nuclear Safety Commission. The licensing will assess the acceptability of the Oakville company’s Generation IV technology, which it is developing as part of a $68.9 million Integral Molten Salt Reactor (IMSR) project – meant to provide affordable energy for utilities and industry.

SMRs are nuclear fission reactors that are being designed as smaller alternatives to traditional large reactors. While the technology for the small nuclear reactors has existed since the beginning of reactor technology fifty years ago, it is currently being developed and considered as ways to cut the economic and environmental costs of nuclear energy.

The government called its investment in Terrestrial Energy a way to create “significant environmental” benefits, noting that SMRs are expected to play a key role in its efforts to achieve net-zero greenhouse gas emissions by 2050.

“This is our moment to shape the next wave of nuclear technology and move to the frontlines in the battle against climate change and the plan to get Canada to net-zero by 2050,” O’Regan said. “SMRs are a game-changing technology with the potential to play a critical role in fighting climate change, and rebuilding our post COVID-19 economy.”

Founded in 2013, Terrestrial Energy is developing its SMRs, which it calls “revolutionary.” It touts its tech as “completely different nuclear technology” and more versatile than conventional nuclear power plants. “IMSR technology can be brought to market quickly, building them in four years to produce electricity or industrial heat at prices competitive with fossil fuels, while emitting no greenhouse gases,” the company’s website stated. “The first IMSR power plants are expected to come online in the late 2020s.”

In addition to the $20 million from SIF, Terrestrial Energy has committed to spend at least another $91.5 million in research and development on the project. The company has also committed to create and maintain 186 jobs as well as 52 co-op positions nationally.

The funding aligns with the Government of Canada’s SMR Roadmap, which was released in November 2018. The report, which resulted from a months-long nationwide survey, found that Generation IV SMR development is a response to market forces for “smaller, simpler and cheaper” nuclear energy. It estimated that the global market for this technology will be “driven not just by climate change and clean energy policies, but also by the imperatives of energy security and access.”

Ontario, Saskatchewan, New Brunswick, and Alberta are among the provinces that have signed on to promote SMR technology. Minister O’Regan’s office is set to release an action plan on SMR later this fall. He noted on Thursday that his office is consulting with provinces and Indigenous groups and called SMRs a “safe, reliable, proven technology” that is essential is helping get Canada to zero emissions.

Bains and O’Regan both called the investment in SMR one of several tools the federal government has in meeting its 2030 and 2050 environmental targets.

The funding provided to Terrestrial Energy is the latest from the federal government following its renewed commitment to investing in cleantech and reducing environmental impacts. In addition to recent investments towards reaching zero emissions, the government also promised to ban many single-use plastics in the country by the end of 2021.