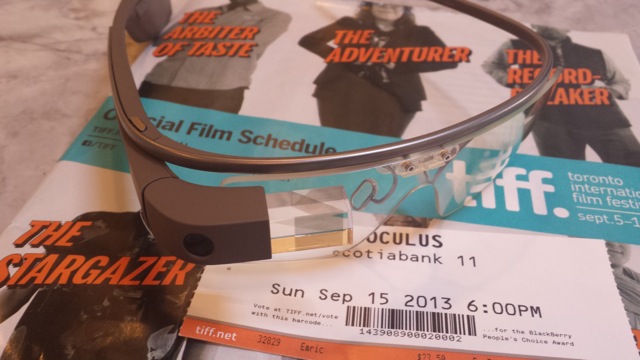 The Toronto International Film Festival (TIFF) wrapped up this Sunday and I thought before it left the city that I would experiment with Google Glass while attending the festival.

My experiment was simple: I would attend a movie wearing Glass and see if I would be asked to take off this wearable recording device or leave. The point of this all was to draw attention to how ill-prepared we really are for the onslaught of wearable technology that is coming our way – especially smart glasses like Google Glass.

I decided to attend the movie “Oculus”, a film by Mike Flanagan, simply for the reason that I thought it would be ironic to attend a film with that name while wearing a futuristic ocular device (the fact that it was a horror movie also helped).

My rules for this experiment were as follows:

This last rule was selected based on the fact that we currently bring recording devices with us into movies today – our smartphones – and we aren’t ushering people out of the film because someone has this. I should add that I had no intention whatsoever of recording a film.

When I arrived at Will Call at the Scotiabank Theatre, the attendant asked what I was wearing. I told her it was Google Glass. She nodded and said nothing after. I took that response to mean, “I hear you but have no clue what you are talking about”.

I moved slowly up the escalator in the theatre and then headed to where they were checking tickets. I gave the volunteer my ticket. She stared but tore the ticket and I was through.

It wasn’t until I walked into Theatre 11 that I was actually stopped and questioned. A TIFF staff member (or well dressed volunteer not quite sure) pulled me aside and started the conversation by saying, “That’s an interesting piece of headgear you have on”. He went on to ask what this was before asking the most important question of the night, “can that thing record video”. I told him that Google Glass can record video and that, although it defaults to 10-second clips, I could tap to extend that for as long as the battery life would last.

He paused and said “well, we don’t have a policy on this so I just ask that you please do not record the video when you watch it.” And added, “I am sure as these things become more popular we are going to have to figure this out”.

It was at that moment that my experiment had succeeded. My being there with Glass and the attendant’s lack of rules on this subject pointed out how little prepared industries are for the coming of wearable tech. He was right of course, there is no policy. And why would there be right now. There are only 10 or so Glass devices in Canada at this time.  But come 2014 I won’t be one of the few I will be one of the many.

Big questions around Google Glass have already started to be raised. Back in June, Google received pressure from Canadian privacy commissioners who sent a letter to Larry Page raising their concerns over privacy and Glass. In August of this year, Peter Fleischer, Google’s Global Privacy Counsel, assured commissioners that concerns that they expressed to Google were unfounded. But I am pretty sure this conversation is far from over.

But privacy is not the only concern Google Glass will raise when the estimated 64,000+ Glass owners are walking the streets in 2017. As my experiment pointed out, copyright and piracy will need to be added to that list of hot topics.

Piracy is a huge issue for the media industry. A recent report from Norwegian market research Ipsos MMI found that in 2012 there were around 65 million illegal movie downloads and 55 million TV downloads. And that is just in Norway. What happens when you have wearable devices that make recording of theatre films that much more easier? I’m pretty sure this number can get much, much bigger.

As we enter 2014, we are sure to expect many regulatory and cultural questions (e.g. is it polite to eat dinner with Glass?) as more and more individuals start to walk around with smartwatches, smart glasses, and even smart socks.

Of course technology is not responsible for making ethical choices. It is only a tool used by people. The decision to record a video with Glass while at the theatre isn’t up to Google it would be up to me. Which is why, when I took my chair and saw the piracy and cellphone ad in the pre-roll before the movie, I took off my Glass, powered it down and put it away in my bag.