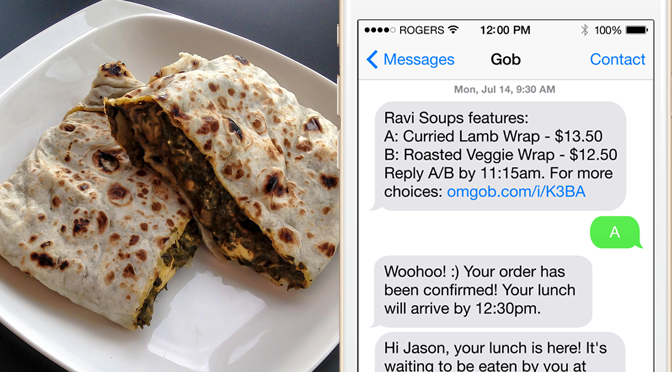 On his first day at his new company, Jason Chung was kindly asked to leave the premises.

It wasn’t his office, though. The location was Wattpad headquarters in downtown Toronto and it was Chung’s first attempt at promoting his curated lunch delivery service, Gob, this summer.

“We handed out a few [discount cards] and we actually ended up getting kicked out because a couple people complained,” he recalls with a chuckle.

Maybe he got a little excited explaining how Gob works: the service sends you two options for lunch each morning via text message. Reply with ‘A’ or ‘B’ via text message, and receive your meal at lunch time, delivered to your office.

A few hours after handing out the discounts, Chung marched back into the Wattpad office with fresh lunches for his first customers. The sight and smells raised eyebrows in the open-concept office and jealous, hungry co-workers asked around.

“Wattpad was our validation”

“Everybody saw us,” Chung says. “Even though we got kicked out on the first day, it was still pretty positive because a high percentage of Wattpad employees still signed up.”

“Wattpad was our validation in terms of whether it resonates with people in Toronto.”

Anyone who works in an office can relate to the lunch dilemma. Chung, an engineer by training, has worked in in the automotive, aerospace and energy sectors, thinks of his time working in big corporations as the genesis of Gob.

You want lunch to be inexpensive (because you do it so frequently), convenient, fast and healthy. Chung describes he and his co-workers talking about going out to try something new, but usually just “defaulting to the cafeteria or the closest thing nearby.”

Chung is courteous, but he wears his impatience and ambition like badges of honour. He doesn’t mind describing his failings or his process.

“We’re learning but we’re not learning that quickly and we’re not failing very fast.”

After realizing that working in a corporate environment wasn’t for him, Chung partnered with a friend on developing software that targeted the education sector as a customer segment. He found the sales cycle for education technology to be too long.

Sounding every bit the founder of a modern startup, he summarizes his experience as: “We’re learning but we’re not learning that quickly and we’re not failing very fast.”

Shifting his attention to the nascent Gob, Chung and his co-founder began talking to restaurants about an all-inclusive reservation, ordering and payment system that would remove the multiple stages of waiting from the process of going out for dinner.

So Gob wouldn’t be an all-in-one solution. Instead, it would focus on lunch delivery.

But it wasn’t until Wattpad that they knew they had something that the company, and the idea, could grow.

In the months since this validation, Gob has added another route to its service and is looking for more restaurants to add to its menu.

“Because we focus on bulk deliveries, we save on delivery costs and pass the savings onto our customers. The cost of delivery is between $1-$3 which is included in the price of the meal, so what you see is what you pay,” Chung says.

“A one-man startup is very likely to fail.”

Since the summer, Chung and his original co-founder went separate ways. Handling all the responsibilities of fulfilling orders and improving the service himself, Chung arrived at another conclusion:

“A one-man startup is very likely to fail,” he says.

Now, after recruiting Anirudh Swaminathan as a new co-founder to split the responsibilities of dealing with customers and growing the company, Chung is thinking bigger. There’s a Gob app on the way, and Gob is expanding their curated selection of meal options to include more of the best restaurants in Toronto.

Though still in its infancy, Gob is gaining the social traction that helps remarkably simple online services spread so quickly.

The company’s progress could boil down to the three principles that Chung says he bases his company on:

Work on the right thing at the right time; execute quickly against your competition; “and honestly,” he says with equal parts pride and fatigue, “work your ass off.”

This article was originally published on the Dx3 Digest. Registration is now open for Dx3 2015, March 11-12 at the Metro Toronto Convention Centre. For more digital marketing, advertising and retail news, subscribe to the Dx3 Digest Newsletter or follow Dx3 on Twitter.

Hootsuite has raised a $65 million from CIBC Innovation Banking. The financing, raised by a financing agreeement, will help Hootsuite expand in the Asia-Pacific…