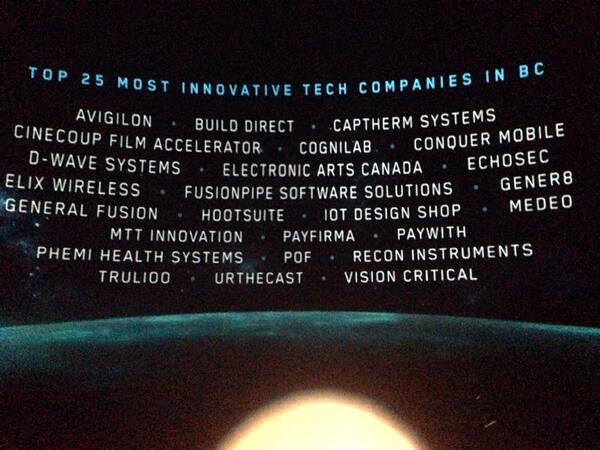 NextBC has named its most innovative company in British Columbia, in Burnaby’s General Fusion. NextBC is the award show of DigiBC, a member-supported, non-profit organization that seeks to make BC the most recognized centre for digital media and wireless excellence.

Dr. Michel Laberge founded the company “with a singular focus to develop economically viable fusion energy. His key insight was realizing that Magnetized Target Fusion, with the aid of modern electronics, materials, and advances in plasma physics, could provide a faster, lower cost, and more practical path to fusion power.”

General Fusion is “a company who is transforming the world’s energy supply by developing the fastest, most practical, and lowest cost path to commercial fusion power. The fusion energy is fueled by hydrogen isotopes, which are easily extracted from seawater,” said Laberge. “There is enough fusion fuel to power the planet for hundreds of millions of years.”

D-Wave took home the Silver Award. They’ve produced the world’s first commercial quantum computer. Their vision is the integrate new discoveries in physics, engineering, manufacturing and computer science breakthroughs. Their technology will help solve some of the world’s most challenging problems.

Meanwhile the Bronze Award went to Avigilon, the company defining the future of protection through innovative, end-to-end surveillance solutions.

“The quality of the companies selected as finalists was so high, it was really difficult to select the top 3,” said judge Olivier Vincent, founder of LocalSphere. “As judges, we were a bit overwhelmed by the need to only extract a small number of top winners.”

British Columbia receives an ‘A’ in 2018 KPMG Technology Report Card

BC’s tech economy has received an ‘A’ grade in KPMG’s British Columbia Technology Report Card. The report rates the tech sector’s performance in the…