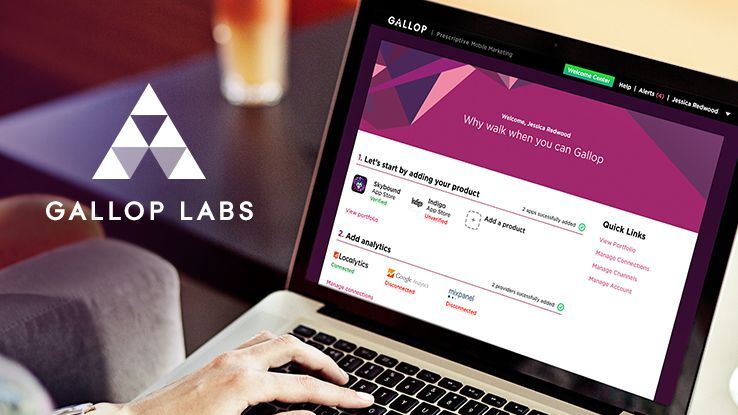 BetaKit has learned that Toronto-based Gallop Labs has been acquired by London, Ontario’s Big Viking Games. While employees of the technology platform side of the company transitioned over to new roles at Big Viking’s Toronto office last week, roughly ten in all, they were not joined by Gallop co-founder and now former CEO, Karthik Ramakrishnan.

Since December, BetaKit has been tracking the story of Gallop’s acquisition. The Toronto startup, which incubated inside BNOTIONS before spinning off on its own, has been on our radar for some time based upon its pedigree and activity. In the last 16 months, Gallop had won a Facebook Innovation Award for its marketing analytics platform, been named Canada’s Most Innovative Company at CIX, and raised $2.5 million in seed funding from institutional investors and notable Canadian entrepreneurs like Allen Lau, CEO of Wattpad, Vidyard’s Michael Litt, and yes, Albert Lai, CEO of Big Viking.

Upon discovering that Gallop Labs was to be acquired by Big Viking in early January, BetaKit agreed to hold the story for one reason: the deal wasn’t done. With final papers yet to be signed, publishing may have adversely affected the acquisition. Interviews were conducted with members of Gallop’s founding team, including Alkarim Nasser, Farzana Nasser, and CEO Ramakrishnan.

At the time, Ramakrishnan described the acquisition as a “perfect union,” noting that in addition to having Big Viking’s Lai as an investor, Big Viking was also a customer of Gallop. While Gallop had other notable customers like AccuWeather, the Associated Press, Rithm, and The New York Times, Ramakrishnan argued that “there is something to be said about dedicating ourselves to one major cause.”

“What really creates assets within companies now are algorithms,” Ramakrishnan said. “Algorithms are the competitive advantage. If we were to build with just one single resource, what would that be, without having to worry about resources or time on our hands. What could we do?”

The question of worry is an interesting one, as Ramakrishnan indicated that Gallop would have difficulty raising follow-on funding in 2016 – a little strange even with bearish predictions considering Gallop’s pedigree and customers (more on this in a bit).

“The company got sold for parts. [Karthik] was a part that wasn’t needed/wanted.”

“It was the right thing to do, we felt, based upon several factors,” Ramakrishnan. “Given certain market conditions that are going to happen next year, the next round – things like that. Obviously, the Series A crunch that’s coming down the pipe. But at the same time, the opportunity that we had on the table with Big Viking seemed like the right one.”

During the interview, and in communication prior to that, Ramakrishnan indicated that he was actively leading the acquisition process, going so far as to say that he approached Gallop’s investors about the deal, and that “all of them were in alignment.” However, last week, all communication with Ramakrishnan stopped. Multiple sources have confirmed with BetaKit that this is because, following the acquisition, Ramakrishnan was told he would not be joining Big Viking. These sources also confirmed that Ramakrishnan had immediately begun reaching out to contacts around Toronto “asking for coffee” and “looking for a job.”

“The company got sold for parts,” one source familiar with the deal told BetaKit. “He was a part that wasn’t needed/wanted.”

After multiple requests, BetaKit was finally able to connect with Ramakrishnan last Friday, who admitted that he would not be joining the rest of Gallop at Big Viking. “This is more of a technology platform acquisition. Everyone on the technology platform side has moved over,” he said.

Speaking with multiple sources familiar with Gallop Labs over the last month, it is safe to say that much of the company’s sale and Ramakrishnan’s departure can be attributed to the departure of another co-founder in May of last year, who recently joined Facebook after an extended sabbatical: Alkarim Nasser.

While both Nasser and Ramakrishnan refuted the notion to BetaKit, every source we spoke to for this story claimed that a poor working relationship between the two directly contributed to Nasser’s departure last year, who questioned Ramakrishnan’s ability to lead the company. The sentiment was so prevalent that it seems to be almost common knowledge amongst Toronto’s startup community.

“The team was a total shit show.”

“Karthik was the CEO of the company, but there were problems with that role,” one VC source who had vetted the company told BetaKit. “It led to questions as to who was really running the company.”

Irrespective of Ramakrishnan’s skills as a CEO, what is clear is that an award-winning company, birthed out of BNOTIONS with triple-A clients, and $2.5 million in seed funding from a large swath of notable investors, was forgoing a Series A round in favour of an acquihire less than a year later. One source who had worked closely with the company in the past said that a lack of investment interest following his departure lead Nasser to push for an acquisition, corroborated by our VC source, who stated that while they liked Gallop’s core technology, “the team was a total shit show.”

While now eight months removed from his day-to-day role at the company (notably as Head of Product), Nasser still sits on Gallop’s board. When asked to comment on Ramakrishnan’s departure, Nasser said, “I really have no idea – so can’t comment on it,” which, based upon the role he would have had to play in approving the sale, is highly unlikely.

As much as this story is about what happened to Gallop Labs, this is also a story about the company that acquired it. BetaKit has held publication until it could speak with Big Viking Games CEO Albert Lai to get a comment on record.

Lai responded to our request with a press release regarding the acquisition ‘under embargo’, which BetaKit did not accept and chose to ignore based upon the previously obtained information divulged above.

DISCLOSURE: Yesterday, BetaKit learned that Big Viking Games had contracted boutique marketing firm Communicable, run by BetaKit Senior Editor Elena Yunusov, for its acquisition announcement. Yunusov had no role in the ongoing reporting of this story and was unaware of its developments [demonstrated by the aforementioned release making no mention of Ramakrishnan’s departure, despite being quoted in it]. BetaKit draws a thick black line between conflicts of interest and will take steps to ensure such overlap doesn’t happen again. Expect more to be published on our conflict and disclosure policy in the near future, ed.

For his part, Lai told BetaKit that his initial interest in Gallop stemmed early on from his time running social web analytics platform Kontagent, and saw the company as an extension of Kontagent’s attempt to provide next-generation analytics for big data to track virality.

“I knew the customer base from the sell side, but this time around I was on the buy side,” Lai said. “I think that’s why they were interested in getting my feedback on the product, and my investment. I gave them some advice and coaching on how to sell it in, especially to game developers.”

As an early Gallop customer as well as an investor, Lai also echoed Ramakrishnan’s statements that having such insight in-house at Big Viking could provide a competitive advantage. “I could totally see how they could solve a lot of the problems we were faced with around marketing automation, and user acquisition, and data science,” he said.

“I could totally see how they could solve a lot of the problems we were faced with around marketing automation, and user acquisition, and data science.”
-Albert Lai, Big Viking Games

“Any modern media entertainment company has to absolutely have a strong internal function, or have a very intelligent way adopted – whether it’s internal or external – a way of using data and data science as part of their marketing operations. You simply can’t be competitive at a world-class level without a strong understanding of how to use your data.”

Lai admitted to being active in the process of introducing Gallop to potential acquirers (confirming that the company indeed had a ‘for sale’ sign on it), before realizing the potential fit of the technology team at Big Viking.

Referring to Ramakrishnan and the rest of the Gallop executive team as close friends, Lai said that “picking up a lot of the team but not all of the team” during acquisitions at this stage was fairly natural.

“I think the natural course for a lot of these type of acquisitions in that the acquirer is typically interested in the technical team,” Laid said. “Typically the business side are folks that tend not to come with the organization for a lot of different reasons.”

In addition to Alkarim’s departure in May, and Ramakrishnan’s ‘departure’ now, Farzana Nasser, Gallop’s Chief Strategy Officer and Head of Customer Success & Marketing will also be departing to focus on not-for-profit work (Farzana is also a Gallop board member). Of Gallop’s founding executive team, only Chief Data Scientist Naeem Lakhani will join Big Viking.

Lai believes the acquisition is a smart move for Big Viking, which acquires exactly what it needs to remain ‘globally competitive’ in the gaming space. However, to some, Gallop’s acquihire might leave a bad taste in the mouth, especially as prominent entrepreneurs call for Canadian companies to stick it out rather than sell. The individuals at Gallop, each with their own motivations, needs, and personal history, should not be held accountable for the decisions of Canadian startups in aggregate. But it’s hard to look at a company with the product and pedigree of Gallop and not wonder ‘what if?’ Or maybe, ‘what went wrong?’

Update (01/26/16): this article has been modified to remove one disparaging quote from a source not pertinent to the core story.

Update #2 (01/26/16): Following the publication of this article, Albert Lai has sent a statement in response, which can be read in its entirety below.

I couldn’t be more proud to be welcoming Gallop Labs to the Big Viking Games team. In light of the recent article about the acquisition, there are two points that I felt it was important to reinforce.

First, I’ve known both Karthik and Alkarim for a long time, and I have an immense amount of respect for them both. As a fellow founder, I can speak personally to the trials and challenges that face any start-up, and I can state with confidence that they are to be deeply commended for their accomplishments. They built an incredible, award-winning organization, and one that will add to the strength of Big Viking Games in exciting ways.

Second, a team of talented individuals is joining Big Viking Games as part of this acquisition – a team that is so much more than “parts”. Our mission as a company has always been to Make Fans, and the former Gallop staff is already hard at work in the Big Viking Toronto office on ways to further that mission. We can’t wait to see what we can do together.