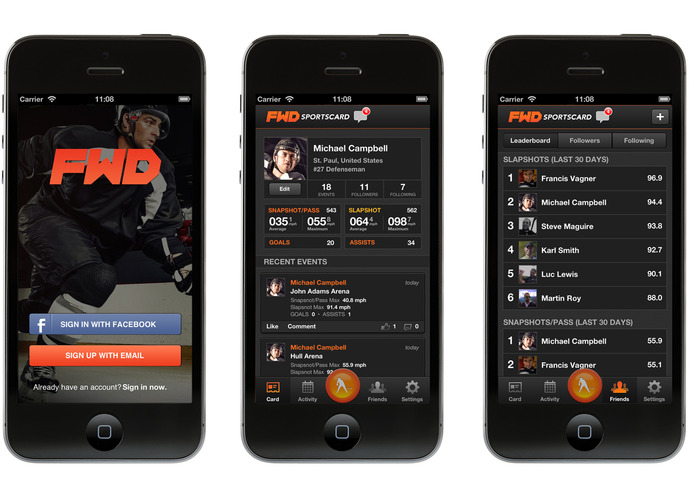 There has seldom been technological or mobile app-based innovation focused on the sport of hockey, but like every aspect of life that will likely change over the coming years.

As a Canadian hockey enthusiast who takes it to rather extreme levels at times, this might be one of the coolest gadgets I’ve come across: the FWD Powershot sensor and app, built by Montreal-based startup Quattriuum.

The device is a small rod weighing 50 grams, that’s inserted into the top of most graphite hockey sticks. The sensor then tracks the movements of the stick when a player exerts pressure, by shooting the puck. The results are sent to the accompanying iOS app and players can gain insight into their data, which can indicate how they can improve their shot.

“We realized there was no technological solution that allowed players to push their talent one step further,” said Quattriuum’s Olivier Munger. “We combined our strengths to create an accessible and ultra-efficient tool, something that would bring science to our national sport.”

The technology in the FWD Powershot helps players learn more about how they play and identifies their strengths and weaknesses. Users can follow their progress over time and socially compare it with other players or post on social networks.

Specifically, it’s a high-performance miniaturized platform that allows real-time processing of algorithms that detect and analyze complex movements. It looks like one gadget that can seriously help a young athlete’s performance in Canada’s national pastime.

The FWD Powershot is being crowdfunded via Kickstarter and unfortunately it’s nowhere near its goal of $75,000. Since the campaign launched, just over $3,100 has been contributed. Given Canada’s huge population of hockey players, ideally with exposure the startup can reach its goal. Currently a pledge of $100 will land a Powershot, with free shipping to Canada and US.

Founded in 2007 by a group of tech-savvy entrepreneurs, Quattriuum specializes in motion tracking and analysis. The team has experience in telecommunications, microelectronics and computing.

The Kickstarter page for the Powershot lists tons of information about the product. Everything is detailed, from initial sketches of the design to the technical specifications of the sensor to photos of professional hockey players using it. If product transparency is what the company is going after, they’ve certainly accomplished it.

When it comes to professional hockey, knowing how much teams will spend to give their players the extra edge, the Powershot could ideally be licensed out in bulk. For coaches who must make million-dollar decisions about who makes the team, an extra set of metrics from the likes of Powershot couldn’t hurt.