At the SaaS North conference in Ottawa—HQ to Canada’s largest e-commerce company, Shopify— this week, over 1,500 attendees and 500 companies learned and discussed scaling up SaaS businesses.

L-SPARK, an Ottawa-based SaaS accelerator in Canada, and Cube Business Media co-host the conference each year, bringing together stakeholders from the tech ecosystem at the Shaw Centre to push the envelope on what Canadian businesses can accomplish.

Leo Lax, executive managing director of L-SPARK and co-founder of SaaS North, kicked off the event with an overview of the conference and an encouraging note of the progress in the tech ecosystem.

“The Canadian cloud economy contributes to $4.6 billion annually to Canadian GDP and by 2018, this will grow to $8.2 billion,” Lax said, citing ICTC data.

Canada’s tech scene is booming…big time. Although Toronto lost the bid for Amazon’s HQ2, Canada is still top of mind for the large tech giants, like Microsoft, which plans on hiring 500 new employees as part of a $570 million expansion (with a new HQ in Toronto).

It’s nice to know Canada has become a serious player in the global tech community, but it’s even more exciting to see how much support has gone to small-medium size businesses. In fact, the majority of the deals made this year were in the $1 million to $10 milion range, with positive growth in Series A financing, according to L-SPARK’s State of SaaS report.

With that in mind, here are some takeaways that every founder can learn from the SaaS North conference.

It’s all about the size of the addressable market

SaaS North included an appearance from Ceridian, the human resources software company known for being the largest tech IPO in Canada. Cerdian’s chairman and CEO, David Ossip, has had five career exits, and knows a thing or two about how to build a billion-dollar company.

His top pieces of advice:

“Podcasts, books, big conferences, social media, and influencers can tell you all you need to know about how to grow your business, but in most cases, people are consuming all this content and not doing anything with it,” he said.

Campbell’s reaction to this? Here are some points:

Moral of the above points: talk to customers. A lot of people say it, but few do it. Go back to the business, create a goal for how many customers to talk to, and most importantly, do it.

The ugly side of growth, and how to deal with it

Every company experiencing growth will eventually have to deal with the reality of the hardships that come with it. Often, when junior people in their career start a business and realize positive growth, they suddenly have to handle and deal with more pressure and responsibility.

In a talk titled Scaling Your Growth Engine, the panelists recommend having at least 80 percent of a team consisting of people who know what they’re doing in the market companies are targeting.

The Scaling Your Growth Engine panel.

“Try to grow as much as you can in a lean and resourceful way, until you hit that breaking point,” said Karan Mehandru, general partner at Trinity Ventures. “The problem with most companies is they want to hire too quickly and think that for every salesperson hired, sales will grow consequently. You have to find the ratio that’s right for your business and make sure that the middle management layer has enough strategic oversight to translate the vision to the teams who execute.”

Aaron Zifkin, managing director of Lyft Canada, was asked how companies should continue to be innovative while growing. “Innovation shouldn’t be a standalone thing, it’s a culture, it’s an environment where people can think through these things,” Zifkin said. “At Lyft, the co-founding team constantly encourages the team to push past the envelope (comfort zone). Most companies will get stagnant and stop advancing their innovation once they find product-market fit and hit the hockey stick curve.”

When discussing how to deal with competition, Tara Bryant, SVP of sales at Pipedrive offered the following perspective: “Instead of focusing purely on every move your competitors make, change your mindset towards investing time on learning more about what’s happening in the broader market,” she said. “Understanding your competitors is important, but knowing the marketplace really well and how your product fits in the mix is probably a better use of your time.”

Michael Litt, CEO and co-founder of Vidyard, started the company in 2011. For Litt, being a part of the hiring process is still crucial – in fact, he is still involved at the very last stage of all interviews for any role.

Litt said he’s not looking to assess someone’s skillsets. “We have great hiring managers who are more than capable to assess that against Vidyard’s vision,” he said. “What I’m really looking for are stinkers and making sure people don’t join the company and fuck up our culture.”

One of the difficult things to get over is that once companies grow to a certain size, it’s much more difficult for the founding team to know everyone well by name. At the same time, the people who join will have different expectations depending on the size. Those who join in the early days will expect less, and those who join at a later-stage will expect a swag bag, new laptop, and a much more polished hiring process.

“Make sure the whole team is aligned with the vision you set, because it’s important that everyone dance to the same beat of the drum,” Litt said. “The energy of being aligned will ultimately transfer into how your customers see you and materialize into a better experience, i.e. sales and growth.”

Perseverance is the true key to success

This advice comes from Carol Leaman, CEO at Axonify, a microlearning platform built for business performance. Leaman was born in Newfoundland in a small fishing village, 30 years ago, she said she was asked what she wanted to be when she grew up. Her response: “I want to run my own company someday…I want to become a corporate CEO.”

Leaman knew, even as a teenager, that her path was destined to build, grow, and lead companies. So she did.

Leaman’s first career out of university was with KPMG. She studied accounting for the wrong reasons and continued on to complete her CA designation – technical knowledge she now highly appreciates which go a long way in helping her in running businesses from a finance-front.

Leaman went on to lead three companies, which all had their own exits: Fakespace Systems (Mechdyne Corporation), RSS Solutions (Visiprise), and PostRank (Google).

Here are some pieces of advice from Leaman’s entrepreneurial journey:

To end, think of this: “why not you?” Leaman has the belief that if someone out there can do it, then anyone can. You just need the fortitude, desire to win, and the element of being a risk taker – that’s the real makeup of any successful entrepreneur. 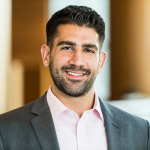 George Khalife is the Director of Business Development & Marketing at Sampford Advisors, an M&A advisory firm for Canadian technology companies. Previous to Sampford, George led sales initiatives in Toronto & New York focusing on sourcing new listings for the Toronto Stock Exchange. On the side, George hosts a podcast called Let’s Grab Coffee where he interviews successful entrepreneurs and is the co-founder of BookBack, an app for university students to buy and sell books.