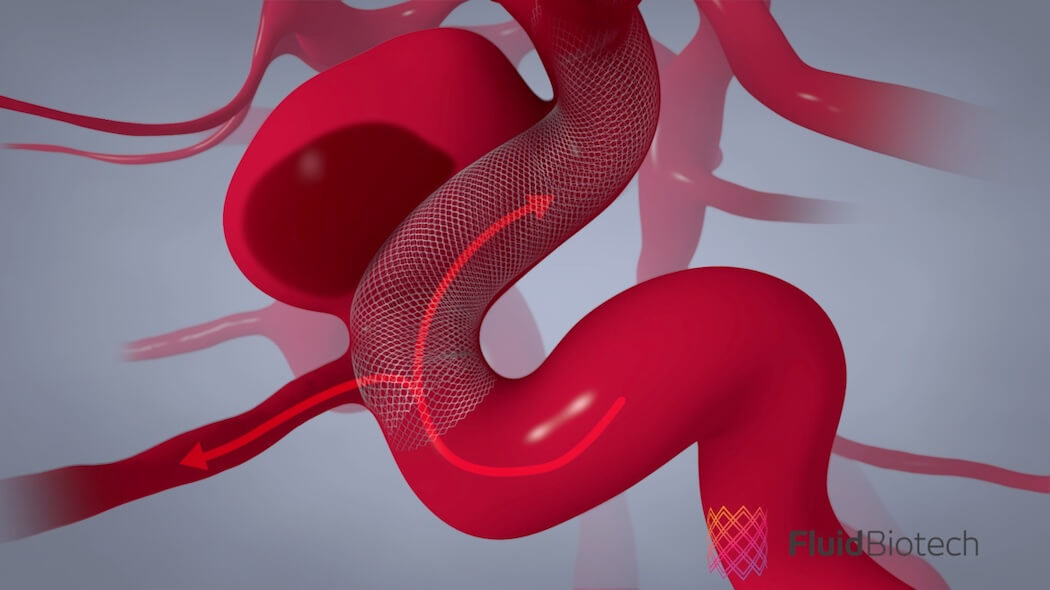 The stent was created by neurosurgeons and University of Calgary professors Dr. John Wong and Dr. Alim Mitha. The pair came up with the idea for a hybrid polymer-metal flow-diverting brain stent a number of years ago and launched Fluid Biotech in 2012 to develop and commercialize the device.

The seed financing brings the startup’s total funding to date to around $8 million and will help Fluid Biotech further develop the delivery system for its stent and to get the device into pre-clinical and human trials.

“We think our stent has the makings of really advancing the field and filling a needed role in the marketplace.”

Fluid Biotech is developing what it calls the world’s first hybrid polymer-metal flow-diverting brain stent. The device is constructed of bioabsorbable polymer and metal, a move away from stents that are traditionally made purely of metal.

A brain aneurysm is a bulge or ballooning in a blood vessel in the brain that can ​​leak or rupture, which can lead to a stroke. According to Fluid Biotech, brain aneurysms afflict up to five percent of people. America’s Brain Aneurysm Foundation reports about 30,000 people in the United States suffer a brain aneurysm rupture each year.

Wong and Mitha argue they have found a better method for stent treatment of brain aneurysms by combining metal and a bioabsorbable polymer.

“This is, we feel, potentially a major advance in our field, and will allow patients to be treated with their brain aneurysms, but with less side effects and less cost as well to the system,” Wong, who serves as Fluid Biotech’s CEO, told BetaKit.

A neurosurgeon of close to 20 years, Wong notes that the traditional metal stents can have a number of negative side effects.

“The existing, current technology has its limitations, including the fact that … because the stent is made out of metal and the metal is permanent, the patient may need to remain on blood thinners, lifelong,” the CEO said. “Metal also causes interference with CAT scans and MRI scans. And, therefore, necessitates the patient to undergo invasive testing in the future, even after the aneurysm is fixed.”

Mitha explained that by making the stent partially out of a polymer, part of Fluid Biotech’s device will disappear over time. He argues this makes the stent more compatible with the human body, allowing for the blood vessels to heal better than with the pure metal stents.

Fluid Biotech’s creators also note the polymer is invisible on CAT and MRI scans, therefore ensuring patients can have non-invasive testing in the future, compared to metal stents.

“The Holy Grail in the evolution of flow diverting technology for treatment of intracranial aneurysms is creating a safe and effective bioabsorbable stent,” said Brian A. Sidman, co-founder and principal of METIS Innovative. “Fluid Biotech is making this concept a reality. We are thrilled to support them in their endeavor and believe Fluid Biotech represents the future of the field.”

As part of the seed deal, Sidman and ShangBay Capital managing partner Dr. Chaucer Shen are joining Fluid Biotech’s board of directors.

Fluid Biotech is also growing its employee base, hiring a number of individuals to help it move towards trials and to help with the development of its delivery system for the stent. The startup is aiming to get its device into human trials by the first quarter of 2023.

Wong said the company is also in talks with medical device manufacturers about its stent.

“We’re experts in our field, we understand the disease, we know the tremendous impact that a brain aneurysm has on a patient and their family,” said Wong. “So, we’re extremely motivated to find better solutions.”

“We think our stent has the makings of really advancing the field and filling a needed role in the marketplace,” he added. “As we grow, as our product becomes more and more well-proven, those existing medical device manufacturers, we believe, will be highly interested in incorporating something like this into their portfolio.”