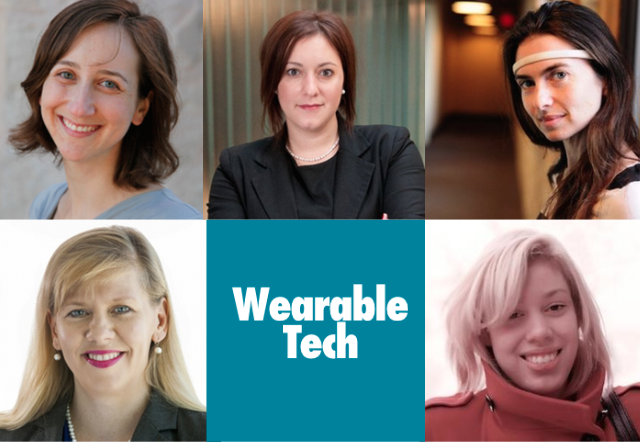 The wearable space is seeing a tremendous amount of activity, and here in Canada is no exception.

Canada is home to a number of game-changing startups and research labs that are forging a path for this new technology to take shape in our everyday lives. It’s also a place where women are leading the way. Here are five women who are making waves in the wearable tech space in Canada.

If the perfect mix for wearables is equal parts tech and fashion then Ariel Garten fits the bill. Garten is an accomplished fashion designer, artist, psychotherapist and is the CEO and co-founder of InteraXon, a thought-controlled computing company behind the brain-sensing headband Muse. Muse is a brain fitness tool that helps you improve your concentration or decrease stress by detecting and measuring your brain’s activity.

In 2012, Muse successfully raised its funding on Indiegogo with more than $280,000. Back in August of last year, InteraXon closed $6 million dollars in Series A funding from a number of prominent investors including Horizon Ventures, OMERS Ventures, and A-Grade Investments. The company is currently preparing for the launch of Muse which is scheduled to start shipping to backers in May.

When it comes to wearable technology, Foetini Agrafioti has heart, literally. Agrafioti is the inventor of HeartID, the first biometric technology to authenticate users using their unique cardiac rhythm. Based on this doctoral research, she launched wearable tech startup, Bionym, with fellow University of Toronto graduate Karl Martin. The company is currently working on developing, the Nymi, a heartbeat authentication wristband which is set to launch later this year.

Agrafioti has a PhD in Electrical and Computer Engineering and is a Post Doctoral Fellow at the University of Toronto. Her research is in the area of biometrics security, privacy enhancing technologies and signal processing and she published numerous scientific papers on medical biometrics. In 2012, Agrafioti was named “Inventor of the Year” at the University of Toronto.

Inventing a wearable is only one step in getting it to market. An entrepreneur has many steps they need to take to manufacture, ship and sell their product to get it in the hands of the masses. No one knows this better than CEO and co-founder of Shoplocket, Katherine Hague.

Launched in 2012, Shoplocket is an e-commerce solution that helps entrepreneurs sell their products from pre-orders to full on shopping cart. Earlier this year, Shoplocket was acquired by PCH International, a company that offers services that span all stages of product development and supply chain management. Since the acquisition, Shoplocket has expanded its platform to create a global community dedicated to supporting the hardware revolution in its entirety. Part of this shift included the launch of Blueprint, a how-to portal for hardware entrepreneurs to equip them with what they need to know to be successful in this space.

Whereas a lot of focus in the wearable space today is on hardware and gadgets, a large part of the wearable technology movement is in understanding how connected textiles and clothing can help us connect with each other and the outside world. This exploration of human-technology interaction is a core focus of OCAD’s research centre, The Social Body Lab, led by Director Kate Hartman.

Hartman is no stranger to physical computing and wearable electronics. As the Assistant Professor of Wearable and Mobile Technology at OCAD University, an accomplished artist and author, she has created works that use a variety of different materials from radio transmitters to LEDs and that have been exhibited and written about internationally. Some of her projects include Nudgeables, a set of accessories that allow the wearer to send secret messages to another from a short distance away, and Vega Edge, a wearable bike light which successfully funded on Kickstarter last month.

Most of the new technology today is invented, adopted and celebrated well before understanding how it will impact our lives, cultures, and social practices. It’s in this area that Isabel Pedersen is most interested in as Canada Research Chair in Digital Life, Media and Culture. She is studying how the public prepares for new technologies like wearables and how media, like pop culture and film, is being used to influence parts of our humanity and our technological creativity.

Pedersen is also the Director of Decimal Lab at the University of Ontario Institute of Technology where wearables, carryables and implantables are explored in context to our digital lives. Decimal Lab recently participated as part of Meta Spaceglasses “golden ticket” program, the much anticipated augmented reality glasses. They also just finished a collaborative project with Toronto-based MeU, a wearable device that embeds into clothing to let wearers display messages using LEDs.

Minister of Small Business and Tourism Bardish Chagger and Kitchener Centre MP Raj Saini today announced a non-repayable contribution of up to $880,000 for…