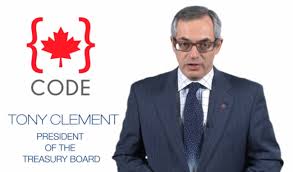 Back in October MP Tony Clement revealed that the federal government would be sponsoring a new “national open data appathon,” to bring the high tech community together and celebrate Canadian entrepreneurship and innovation.

“From air-and water-quality monitoring, to border waiting times, to information on permanent residency applications, crime statistics and vehicle recalls, Open Data has the potential to drive social, political, and economic change,” said Clement, president of the Treasury Board of Canada. “This data is a treasure trove of information that offers endless possibilities for researchers, innovators and entrepreneurs.”

CODE will happen at Toronto’s XMG Studio Inc., run by Ray Sharma, a co-organizer of the hackathon. Participants can also choose to participate from their homes by logging on to the CODE website.

CODE participants can also use an online tool to select team members based on the areas they’re interested in.

OpenText, the Waterloo company that seems to have lots of money, is providing the $25,000 grand prize. Also up for grabs is a $5,000 second prize and $1,000 for third place. Fifteen teams will get to pitch their apps to industry experts and investors, who will decide on the winners. The winning applications could be released by their creators or in cooperation with a third party.

Clement further commented that CODE is part of the government’s “broader commitment to be at the forefront of the global Open Data movement.”

“I truly believe that Open Data is one of the most valuable natural resources of the 21st century, and to fully capitalize on this resource, governments need to be 100 per cent committed to getting their data into the hands of entrepreneurs, as well as other data enthusiasts in schools and society,” he said.

Next Gen Den, the 20 episode Dragons’ Den spinoff made for web and mobile, is back for another season, and its new judges are…