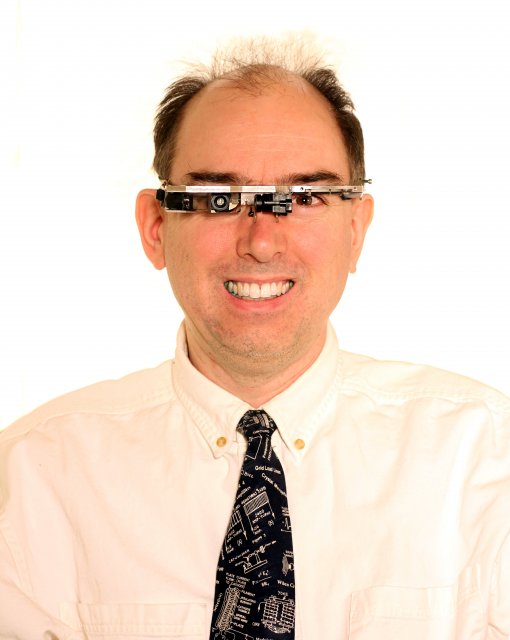 TEDxToronto is back for its fifth year bringing thought leaders together for a full day of inspiring idea sharing to act as a catalyst for profound change. This year’s event centralizes around the theme “The Choices We Make” and speaks to the idea that we are who we are today because of the choices we made prior to this moment.

Yesterday, TEDxToronto announced their final group of speakers making up twelve in total for this year’s lineup. Among this last group is University of Toronto Professor, father of Wearable Computing and “modern-day Leonardo Da Vinci” – Steve Mann.

Professor Mann was announced as part of a group that, according to TEDxToronto, “shows quite literally how the choices we make can carve out unique paths for our society as a whole”. The key word for Mann is “show”. He has been wearing a computerized-vision system he describes as a “digital eye glass” since the late 70s – nearly two and half decades before Google Glass hit the streets in limited quantity earlier this year.

“35 years ago I invented the digital glass so that I could see and understand the world in more than one way,” Mann explains in his speaker video for TEDxToronto. “Now I see through that Glass and into the future. A future where the boundaries between cyborg space and the real world will disappear”.

Mann was first inspired to change the way the world looked through glass at the age of four when his grandfather was teaching him to weld. “The dark world of the welders glass inspired me to experiment with various kinds of glass to help see things better,” he says early in the video.

In 1981, Steve Mann created the first version of the digital eye glass – EyeTap, which consisted of a computer in a backpack wired up to a camera and a rigged to a helmet. The device has gone through four generations since. The current generation is much sleeker and more glasses-like but still hasn’t lost its futuristic feel.

Beyond the genius behind the technology and Mann’s before-his-time vision of what is evidently becoming our technological future – what is most interesting about Mann’s journey with wearable tech is the social reaction he has encountered along the way.

His unusual computerized headgear has caused him to be assaulted at 23 while getting on the subway and once again accosted again back in 2012 while on a trip to Paris with his family. When he was 40 he ran into issues at the US consulate picking up his daughters passport since being an electronic device contravened the consulates no electronic devices policy. The opposition he received, mostly from authority, caused him to conclude that he had created the opposite of surveillance, what he calls sousveillance  – the recording of activity by cameras borne by people rather than attached to buildings.

Mann has written many articles and regularly speaks about the societal implications of wearable computers. He was recently a keynote speaker at IEEE International Symposium on Technology and Society in June of this year which explored the benefits and dangers of living in a world filled with wearable devices and other smart technologies.

Mann is also the Chief Scientist for Meta, the much anticipated first see-through augmented reality smart glasses which recently sold over 700 pairs of glasses in one-week and are expected to ship their 0.1 version as early as November of this year.

TEDxToronto is being held at the Royal Conservatory of Music on September 26 in Toronto. Delegate applications for the conference are now closed. Those accepted to this year’s event are starting to receive their confirmations – as evident in the sea of elated tweets from those that have received the email. For those that are not attending this year’s event, TEDxToronto 2013 will be livestreaming the event so save the date.

Also speaking this year is CEO of Ipsos Public Affairs, Darrell Bricker and genome expert Dr. Brendan Frey. TEDxToronto have put together some great profile videos of each of the speakers. You can check them out on YouTube: http://www.youtube.com/tedxto. We have Steve Mann’s speaker video below.