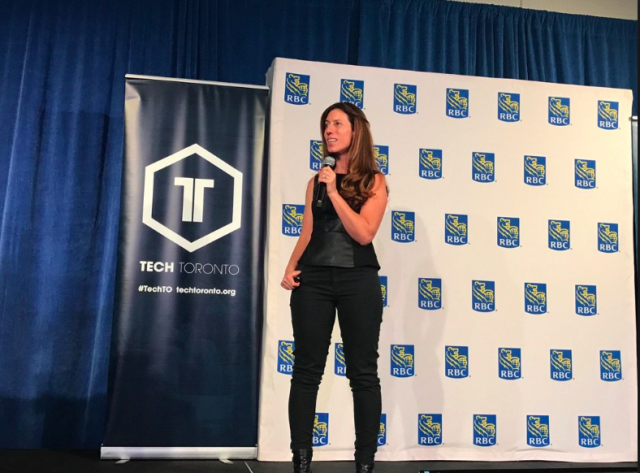 At the latest TechToronto, Candice Faktor, founder of Faktory Ventures, implored the audience to think about the impact technology has on the world.

Faktor was previously general manager at Wattpad, a co-creator of Torstar Digital, and an associate of the Creative Destruction Lab. She currently runs a seed fund, which invests in and advises early-stage startups with global ambitions. Faktor’s key goal is to invest in startups that are having discussions about whether the technology they are creating is ethical. She has always been fascinated by the future, and now she wants a front row seat in shaping it.

“If you want to actually make a difference, you have to get curious about the things that are going to be the future.”

“We are walking on this tightrope. We may always think that we are doing good, but the question is: are we really? It’s kind of like having an existential moment,” she said. “I think it’s really important that we actually stop for a second and think about the impact of what’s happening with social media, with Trump, with anxiety, with the existential threat to humanity, with the possibility of AI military warfare. I went to this dark place and I was really scared.”

For Faktor, the future is not linear, it’s exponential; and she believes that Canada is the best place to create this future, calling it one of the only places in the world with an aligned set of values around what it wants the future to be.

“You need to be optimistic about the future or you can’t create the future you want. The key thing is leaning into this because you can’t have unbridled optimism without grounded facts. If you want to actually make a difference you have to get curious about the things that are going to be the future, and that’s certainly what I did. It takes a lot of courage because you are going to have that fear, whatever that is,” she said.

According to Faktor, the first and most important step in shaping the future of the world with these technologies is to recognize the amount of responsibility associated with this task. She recently invested in Flipd, an app that encourages users to stop being absorbed in technology by locking phones.

Watch the full talk below:

TicketLeap Relaunches With DIY Seating Charts and a Focus on Social