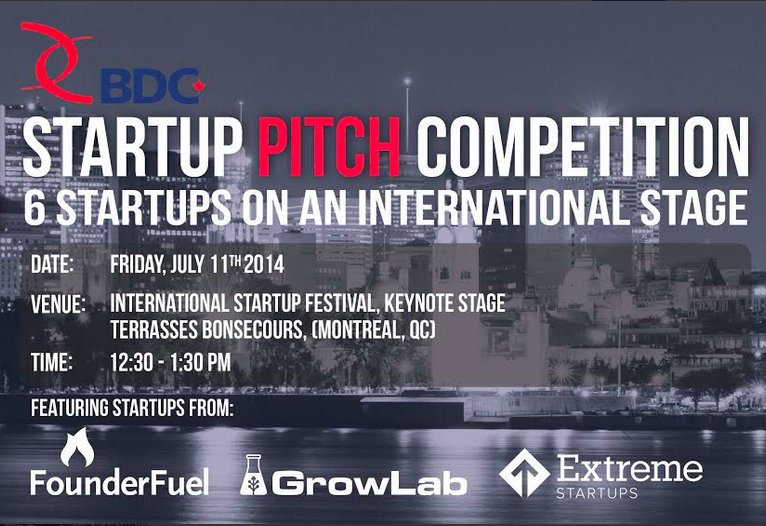 Three of Canada’s longest-serving accelerator programs are putting on a joint pitching event for BDC-backed startups at this week’s International Startup Festival.

Two startups from Toronto’s Extreme Startups, Montreal’s FounderFuel and Vancouver’s GrowLab will pitch their venture for about three minutes each to a startup fest crowd. Extreme will send Hurrier and Innohub, FounderFuel will send Van Hawks and Provender while GrowLab will send Cinecoup and Learn Dot.

Daniels said for too long accelerators haven’t initiated real collaboration amongst each other, but  he said since he took over Extreme a year ago, he’s tried to work together with other accelerators. He’s got a point- what may well have earned Extreme Startups and GrowLab its newly announced funding under the Canada Accelerator and Incubator Program (CAIP) was likely the two accelerators decision to team up on one application.

“Since I took over I’ve been into open collaboration,” he told BetaKit. “I pinged everyone who wants to participate and specifically with the BDC-backed accelerators, how do we create some sort of series that’s not only in Montreal, but Toronto and Vancouver, so this is the first out of a broader theme that we’ll be doing with us three [BDC-backed] programs.”

The two teams that Extreme is sending weren’t necessarily the “best” two companies out of their cohort, but the most relevant for the event, as Daniels said. All the teams need to be BDC-backed, which means they’ve been selected by the Business Development Bank of Canada (BDC) to receive a $150,000 convertible note and were deemed “venture-backable”.

To Daniels, this could turn into something more long-term, and Startup Fest is the perfect place to do it, given its history throwing outside-the-box events that really resonate with people (most notably the popular Grandmother’s Pick Award).

“Getting this off the ground is the first step in showing solidarity throughout the Canadian ecosystem,” said Daniels.

The new event in Montreal this week will actually be but one of at least three stops. They’ll throw the same event in Toronto, likely coinciding with a large startup event there, as well as in Vancouver. Daniels said more programs could end up joining the event too, throwing in a few more BDC-backed companies into the mix.