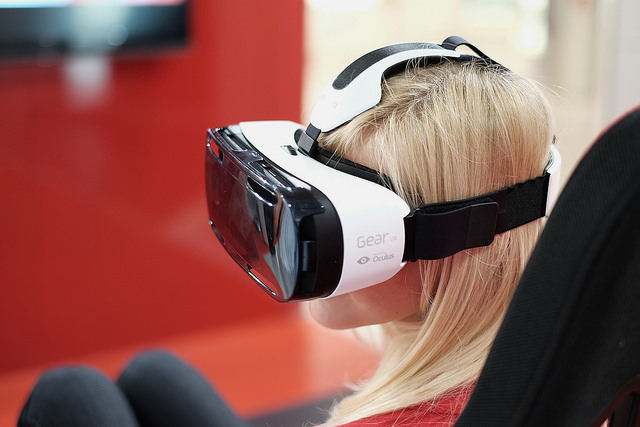 How does a reporter focus the audience on the subject of the story when the viewer has the freedom to look anywhere, even behind them? Who is the journalist – the person creating the VR experience, or the person experiencing it, who can then create their own story? Is virtual reality a useful medium for any kind of story, or are there limits?

These were some of the deep questions discussed at the Symposium on Virtual Reality Journalism, presented by local VR innovators Hammer & Tusk, at the Pacific Rim Hotel Conference Centre in downtown Vancouver on June 25.

“Just because it’s immersive, doesn’t mean it has a narrative. It doesn’t mean you don’t have to guide the audience with traditional storytelling techniques.”

The new medium raises questions that are fundamental to journalism, said UBC assistant professor of digital media and global affairs Taylor Owen. While the jury is still out on the answers to some of these questions, he provided some ‘lessons learned’ for journalists looking to experiment with VR. “Right now, you can spend huge dollars on something that might get very few views,” he said, contrasting high production values with the hundreds of clicks that some VR videos attract – since not every video will go viral.

One complication is Facebook 360’s video metrics tracking capabilities: some views simply won’t show up, a fact known by anyone who has ever scrolled down their social feed, watching a video that runs automatically, without ever clicking on it to hear the audio. And of course, if the viewer doesn’t have a pair of pricey VR goggles (which they’ve probably purchased to play games or watch porn, not peruse journalistic news clips, as one speaker noted), it can be impossible for them to have the full VR experience. The analyst looking at clicks might not be able to tell whether the video was even seen as it was meant to be seen.

Another key tip for the VR video makers: 360 video can be overkill for reporters if they are looking to frame a scene in front of them. Stereoscopic video is good enough for 180-degree shots. The same rule of thumb also applies to long distance shots where VR doesn’t necessarily add to the experience.

The afternoon kicked off with a panel on using VR to create an immersive experience, beyond what can be achieved with traditional video production. It included some of VR journalism’s leading lights: Paul Cheung, director of interactives and digital news production with the Associated Press; documentary producer Cassandra Herrman, who has filmed all over the world; and Tyson Sadler, an award-winning VR journalist and documentary filmmaker.

That immersive experience, where the viewer really feels like they’re part of the action, is the big goal for VR. Cheung pointed to his favourite example — a recreation of the Wright brothers’ historic first flight that allowed him to see the plane fly above him — as reaching that lofty mission. Sadler, meanwhile, highlighted a scene from a documentary on south Sudan, watching aid crates dropping from the sky all around him in VR (and enviously wondering how the production team managed to be in the right spot at that time).

Hermann cautioned VR video makers to think carefully about what they’re trying to achieve. “What I often see is just a collection of scenes. Just because it’s immersive, doesn’t mean it has a narrative. It doesn’t mean you don’t have to guide the audience with traditional storytelling techniques. You can find a marriage between the two.”

Prehistoric beasts from the dinosaur age soar around you as you climb a mountain in an exotic locale – and your eyes are drawn to the movement. For Cheung, experiencing that in VR is partly where it ‘clicked’ for him about how to get the viewer to focus on the real action. Human beings are naturally drawn to focus on movement – and as better audio technology is developed, soon VR developers will be able to draw viewers to look to the left, right, or behind them – instead of focusing just on the scene in front of them.

That’s the way to overcome the key challenge of VR that stems from the medium’s biggest benefit: giving total freedom to the audience to see what they want to see. You can still give them that freedom, but direct them to the action, so that — as Hammer & Tusk founder Mack Flavelle put it — they’re not watching a cool volcano eruption behind them when there’s a climactic Star Wars lightsaber fight going on just on the other side of the 360 video.

One of the key takeaways: this is a rapidly evolving medium and even organizations that can afford expensive VR productions are still experimenting to see how to use it effectively. VR may not be the ideal medium for lengthy feature films or television shows, but for short journalistic clips, it’s a new way to tell a story that can have a visceral, emotional impact.