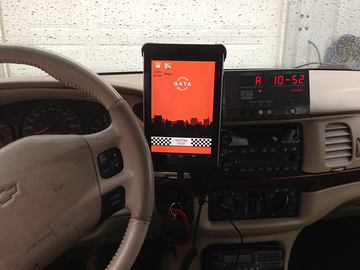 If there’s a night in shining armour ready to come to the defence of the helpless taxi fleets, losing revenue that could have been by the Uber ride, it might be Edward Yao. He’s the former cofounder and president of TeamBuy.ca and now he’s got his sights set on a new task.

Yao left the Canadian group-buying site in June and now he’s leading a 10-person team at Gata Labs, along with three other cofounders. Gata Labs is a Toronto based start up “that aims to democratize cutting edge technology for local small-medium businesses.” That means it’s currently building out a platform that will build and host personalized apps for any bar, restaurant, or any other service-provider. In other words, its a Platform-as-a-Service (PaaS) startup that will charge a monthly subscription rate.

But the first industry it decided to tackle is a big one, the taxi space. Gata Labs approached three taxi fleets in the GTA and actually built an entire cloud based fleet management and dispatching solution that will meet needs of the fleets, via mobile apps.

Being the smooth-talking CEO he is, Yao corrected me when I suggested that Gata Labs is competing with Uber. “It’s us giving the fleets the tools to compete with Uber, and our cross-platform app will support and host the mobile app experience,” he said. “For the the first time we’re leveraging the landscape for them to compete.”

Taxi drivers may like the extra cash they receive from Uber calls, but Taxi fleets aren’t too impressed. They’re the ones who foot the insurance bill if a driver gets in an accident in between an Uber and a fleet fare (however, Uber has recently expanded its insurance policy). There’s a few other reasons why fleets are in the middle of a battle, but it all points to this: taxi fleets are desperate for a solid mobile dispatching system that can match Uber’s and provide ammunition to win back profits. But white-label solutions from individual providers often just don’t cut it. One Toronto-based fleet has one, but Yao called it “a piece of crap: it’s a web app and it texts the dispatcher. That’s all good and fun until you leave for another city and you have to download another app.”

Gata Labs built out the back-end solution based on the needs of its three beta-testing fleets, which now “adequately serves every fleet under the sun, and we’re bringing them into the cloud.”

Traditionally, we all know what the equipment inside taxis look like: radio or some sort of archaic dispatch solution that isn’t iterative and it isn’t cloud-based. “These guys are installing it on their computer and that’s it. If they want to update it they’re going to pay a lot of money, and if one of their computers goes out…”, said Yao, well, it wouldn’t be too fun.

Now Gata Labs is working its way towards the consumer-facing side of the system (the actual app that people will use, for any taxi fleet). Yao said it will be ready within two months. “The fleets don’t want Uber to continue growing and they’re very vested in working together and finding a solution to compete,” said the CEO.

The app experience for the consumer will be “mirrored almost one for one” to Uber’s, and the taxi fleets have been very specific about what they want.

After the taxi industry, Gata Labs will set out to provide apps for anyone with a service offering. “As easy as it is to build a Facebook fan page, we’re going to allow these merchants to tell us what they want in their application and we’ll build that mobile application within a platform app, so from a consumer’s perspective you’ll have all these apps tied in under one platform app.”

To do it they raised an angel round of $300,000 already, and Yao, Alex McCausland, Neel Lukka, Simon Bourgeois and the rest of the team is ready to battle.

“We have a lot of game changing things in development and are excited to bring them to market,” said Yao.