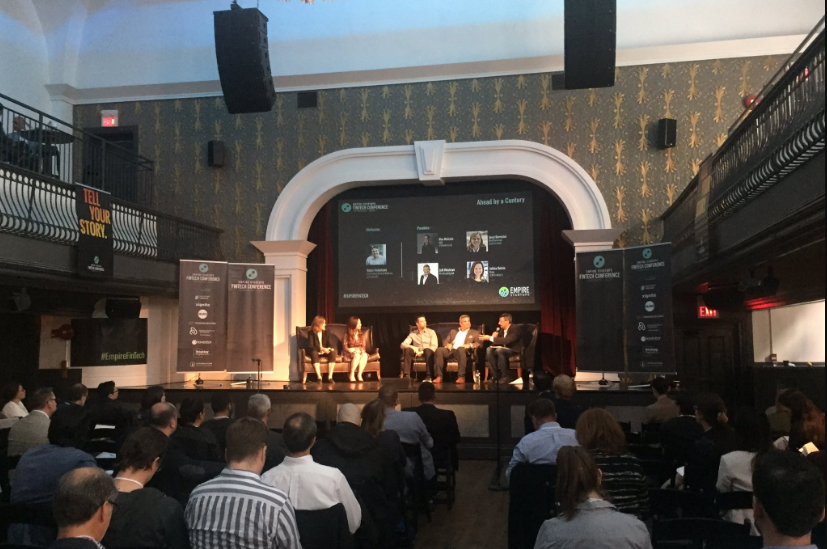 Canada’s FinTech ecosystem is burgeoning with companies like Wealthsimple and Wave making major moves — however, there’s a lot Canadian FinTechs can still do to take the ecosystem to the next level.

This was the key takeaway at the Empire Startups FinTech Conference held in Toronto for the first time on June 27. Empire Startups, which has hosted eight FinTech conferences in New York and San Francisco, brought together US and Canadian entrepreneurs, investors, and startups to discuss how the financial services world is changing and the role Canada is playing in the latest FinTech trends.

The conference featured a number of keynotes and panels about Canada’s FinTech ecosystem, as well as demos from some of the country’s top FinTech startups.

A panel moderated by co-founder and general partner of Information Venture Partners, Robert Antoniades, and featuring Real Ventures partner Janet Bannister; Wave VP of people and culture Ashira Gobrin; 8VC’s founding partner Alex Kolicich; and Thinking Capital CEO and co-founder Jeff Mitelman, focused on how Toronto — and at large Canada — can continue its reign as the FinTech capital of Canada and beyond. The bright minds touched on the areas Canadian FinTechs are doing well, as well as the challenges and limitations the ecosystem currently faces.

On the strengths of Canada’s FinTech ecosystem, Bannister said the country’s strong, diverse talent pool serves as an advantage for Canadian FinTechs based in cities like Toronto and Waterloo.

“I think some of the advantages for FinTech companies in Toronto…is you’ve got great talent here.”
– Janet Bannister

“I think some of the advantages for FinTech companies in Toronto…is you’ve got great talent here,” said Bannister. “Great talent in terms of engineering talent. You’ve got a lot of entrepreneurs that the ecosystem is developing. We’re seeing second-time entrepreneurs and more experienced entrepreneurs.” She added that another advantage is that Canadian FinTechs are “seeing more capital than ever before” and a “lower cost of operating versus in places in the US.”

Gobrin agreed that Canada has a large talent pool, but more notably, she praised the country’s immigrant population and engineering schools for allowing companies to scale-up and add diversity to their teams.

“One of the biggest assets that we have in Toronto…and in Canada in general, is the huge immigrant population,” said Gobrin. “Half of our city comes from somewhere else…which means on these hot topics of diversity and inclusion, [it] makes it really easy to build cultures that are quite diverse with what we have. There’s also a lot of talk to fast-track the immigration process but currently in Toronto, we have some of the better schools in engineering that are producing fantastic talent.”

During the panel, Antoniades pointed to a recent report that ranked Toronto as one of the top FinTech centres in the world. He asked the panelists what Toronto, and at large Canada, need to do to rank higher on the global FinTech map.

“We adopted the language of collaboration very late.”
– Jeff Mitelman

Kolicich’s instant reaction was that Toronto’s ranking “should be higher.” He said in order to strengthen Canada’s position as a global FinTech hub, it’s crucial to look at why Canada isn’t already a larger FinTech hub and what makes Canada’s biggest banks “somewhat less innovative” on the global stage.

“I talked to a lot of Canadian business leaders and they are very proud of how Canadian banks do, and I switch it back on them and say Canadian banks also make the largest percentage of their revenue on consumer fees,” said Kolicich. “So if an optimal banking system is to give banks profit, then okay Canada’s great, but other banks have to innovate to make profit.”

He suggested that Canadian financial institutions could create “special economic zones” to try innovating and determining “what’s missing and what’s necessary” to strengthen the ecosystem’s position and ranking.

"For Canadian companies, best piece of advice I can give you to scale quickly is to leave Canada." @jebannister @realventures #EmpireFinTech

“We need to do more, but we’re just a little slow,” said Bannister. “For FinTechs in Canada, one of the pieces of advice I would give to grow more quickly is to quickly get outside of Canada. I think too many FinTech companies, they stay too long in Canada because they look at Canada and they say ‘this is my backyard and the market is so huge.’ The bad news is that can limit startups when entrepreneurs think all [they] need to do is win the Canadian market. Often, you can scale much faster in the US.”

Can Canadian FinTech lead with AI?

At the Empire Startups FinTech Conference, another panel featuring Marstone CEO and founder Margaret Hartigan; NestWealth CEO and founder Randy Cass; OutsideIQ founder and CEO Dan Adamson; ffVC partner AJ Plotkin; and Nara Logics CEO Jana Eggers touched on how Canadian engineering schools are churning out the future of artificial intelligence, and whether AI and machine learning is starting to materially affect FinTech. The panel suggested that Canadian FinTechs may have the potential to lead by building AI-enabled technologies for both banks and consumers.

"Demand to get the black box out of AI so you can understand why the machine is making the decisions it makes" – @jeggers @ #EmpireFinTech pic.twitter.com/H6HSfTHuVL

Cass kicked off the panel by explaining how AI has potential applications in the wealth management and investment spaces, especially as the technology can potentially identify behaviour traits and patterns that help determine the types of investments consumers can make.

“Where we see AI entering the space right now is in using behaviours to identify what type of investor they [consumers] actually are and adjusting their risk profiles so they are best suited for that type of investment,” said Cass.

“Where we’re seeing the most adoption is in back-end like compliance support or in the insurance industry.”

The panel also stressed AI applications in areas like compliance and the insurance industry. “Where we’re seeing the most adoption is in [the] back-end, like compliance support, or in the insurance industry for some of that and also in FinTech,” said Eggers. “We have a lot of back-end operations, but consumers too. With consumers, it’s really personalization. So it’s personalized offers, which works in FinTech as well.”

As AI and machine learning gain popularity among FinTech startups, Adamson suggested that FinTech companies should be careful when pitching AI-enabled platforms to investors.

“There’s a lot of buzz around the terminology and you have to be very careful,” said Adamson. “There are opportunities there [in AI]. We are early stages on one hand, but on the other…I don’t think it’s enough to say ‘we’re doing what someone else does but we’re using deep learning.'”