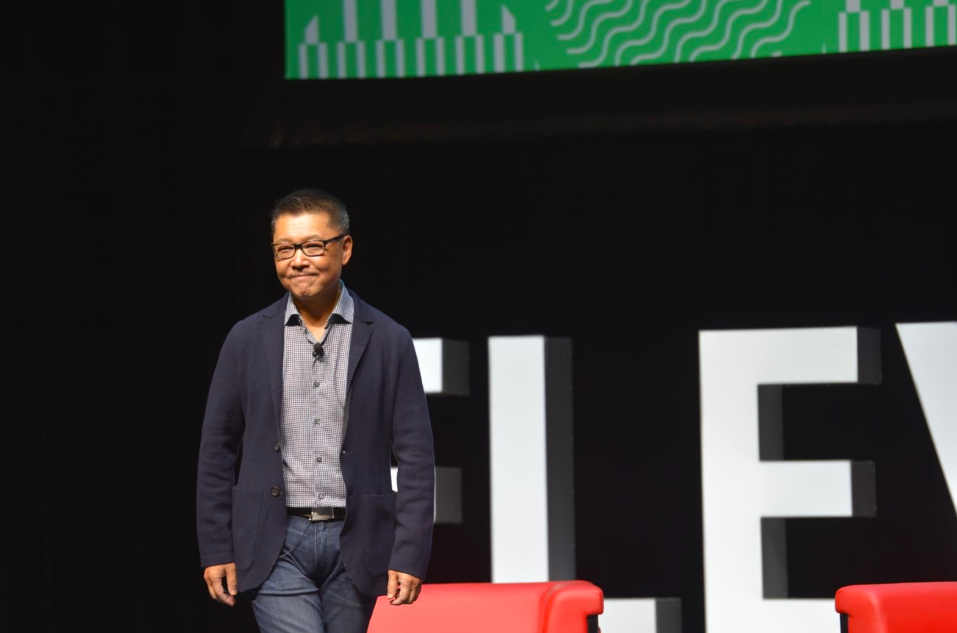 Starting out the day with some homegrown Canadian patriotism, Tobi Lütke, founder and CEO of Shopify, and Innovation, Science and Economic Development Minister Navdeep Bains spoke about the federal government’s Digital Industries Table report and the need for constant collaborations between industry in government.

In a fireside, they agreed that we need more companies focused on growing beyond the $10 million to $50 million annual revenue stage to strengthen the Canadian ecosystem. Speaking to the need for building infrastructure, Lütke said Canada must create significantly more computer science engineers and paid internship programs (For its part, Shopify launched a Dev Degree program with York University this week).

In addition, Bains revealed that through the CRTC, the federal government has committed over $750 million to make broadband internet a basic service for all Canadians.

“The technology is moving fast and people don’t know about it, which means fewer questions are being asked.”

Elevate’s mainstage keynotes seemed like case study examining the Canadian tech ecosystem with both an insider’s and outsider’s lens. The themes of emerging technology—such as artificial intelligence and machine learning—the grit and passion required of entrepreneurs, and having embedded social impact within the company were all top of mind.

Razor Suleman, Elevate’s co-founder and CEO, reminded the audience that there has never been a better time to scale in Canada, but shared some disheartening global research that highlighted Canada’s laggard status as a result of not investing much in research and development.

When compared with other countries after the dot-com bust in the early 2000’s, Canada has fallen behind. “We’re no longer in the top 20 countries that invest in innovation technologies, so when leading countries get together to talk about new technology and the fourth industrial revolution, Canada won’t get a seat at the table,” he said.

Suleman said the one exception where Canada leads is AI. “Ask yourself: do you want to be creators or consumers?…We need to take big bets and have moonshots.”

Echoing the same sentiment, Yung Wu, CEO at MaRS Discovery District, said Canada is having a moment. “Our goal has to be to play to win and not just win the playoffs, folks. We need to raise our game,” Wu said. “Here’s my challenge: we need to back our entrepreneurs to win on a world stage. If we do this in 10 years, we can win in the next 30.”

Elevate attendees also had the chance to hear Whitney Wolfe Herd, founder and CEO of Bumble, who spoke at length about how the media’s coverage of her lawsuit against her former employer Tinder negatively affected her.

She explained that back in 2014—before the #MeToo movement had taken off—she felt alone in dealing with the media frenzy and public opinion. As the head of her own dating app, Wolfe Herd indicated a commitment to building a mission-driven organization. “It’s in our DNA and our values… to end misogyny. Kindness and accountability are so important. Empowerment and equality. You have to make sure that it’s your northern star because it is what your team gets out of bed for every day,” she said.

This mission is extended into the realm of product. “We are leveling out the playing field and putting men and women on the same level for dating,” she said. While some mobile apps have few rules governing communication, Bumble’s app has a “safety net” allowing women to make the first move. “We saw many women using our features and hacking the system to find friends on our app, so we created Bumble BFF.”

In Canada, Herd said that ten percent of the population is using Bumble, and they’re building out a team in the city.

Amanda Lang, BNN Bloomberg anchor, shared key takeaways from her book The Beauty of Discomfort. “We are hard-wired against change…but if we stay in the uncomfortable zone (of the unknown), then good things happen.” She said when companies get too comfortable, they stop innovating, and they need the ability to innovate on the fly.

"Am I solving a problem that people actually have and can I find the people I need to solve these problems?…If you can answer these problems the capital will come." – @zatlyn of @cloudflare talking w/ @ted_livingston of @Kik & @amberkanwar of @BNNBloomberg at #ElevateTechFest. pic.twitter.com/pWSu1NFxEK

Sarah Friar, Square’s chief financial officer, echoed this sentiment: “Get an adrenaline rush every day. If you’re in a role where in the last month you didn’t get that, do something. Life’s too short to wait for something to happen. Don’t be afraid of change.”

When speaking about Square’s value to customers as a mobile payment company, Friar explains how speed is central to enabling businesses to access revenues instantly, and Square regularly looks at its ecosystem data to build relevant product features.

“Banks are leaving digital natives behind too because people want to use a smartphone to do everything with it, in a hyper-fast electronic way.”
– Sarah Friar

Currently, Square is moving into banking territory by helping unbanked people in the USA through its Cash App, which allows users to transfer money through the app. Friar said that they’re giving more people the ability to have a balance and withdraw cash at an ATM, even without a traditional bank account. “Economic empowerment is a massive passion for Square,” she said. “For many people, keeping a minimum balance is hard and people can’t afford bank fees. Banks are leaving digital natives behind too because people want to use a smartphone to do everything with it, in a hyper-fast electronic way.”

While most of the hardware team working on the deep chip for Square is based in Toronto, Ontario, Lang pointed out that Canadian talent too often exports technology and intellectual property to American companies, when it could be used to build Canadian companies instead.

A similar theme was prompted by Lang while interviewing Eric Schmidt, chairman of the board at Alphabet. Lang asked him the perceived threats to Canada with American tech giants opening offices in Toronto.

Schmidt explained with his perspective about Alphabet’s decision to open Google-backed Sidewalk Labs in Toronto. “You have what we need… you’ve got a good government and talent, and companies. When the ecosystem is strong we all benefit. Competition is good. It’s not a zero-sum game. We can win and the startups can win.”

“What worries me is that the technology is moving fast and people don’t know about it, which means fewer questions are being asked.”
– Ananya Chadha

Schmidt said that, through the Sidewalk Labs project, the team is developing a proposal for global smart cities to prosper. “We want to establish and advance concepts for urban living, and we started with Toronto and we will come up with memes that others can copy.”

Alluding to public concerns of how Sidewalk Labs would use public data gathered from the Quayside project, Schmidt said that Google wouldn’t sell back the data back to users because it “violates” what they’re trying to do.

In another talk touching on ethics, Ananya Chadha, a 16-year-old brain-computer interface developer, said the future could include advanced applications like brain-to-brain communications, shared consciousness, and AI-controlled brain implants that could augment intelligence. While many advances in this technology could be used for good, she asked, “What if your brain could be hacked?

“What worries me is that the technology is moving fast and people don’t know about it, which means fewer questions are being asked.”

Jennifer Jackson, CEO of @CapitalOneCA at #ElevateTechFest on next-gen leadership, and the importance of “carv[ing] our work time to build relationships” with your colleagues. Excellent speaker! pic.twitter.com/BvyQ4UuRRD

In a fireside chat, Kik CEO Ted Livingston, was candid about the struggle to make money through Kik, since Facebook would copy Kik’s ideas and offer them free of charge. So, he and his partners decided to enable users to earn and spend the cryptocurrency Kin.

It took some time to convince investors, but today, Kik in the US and Tel Aviv, and Waterloo, which he calls their ‘secret weapon’. “I’m happy we have an office there. They (Waterloo universities) attract great talent and they have a network effect to their co-op programs,” he said. Livingston says he’s bullish about being located in Canada. “Our culture is great… Canada’s style is very much ‘Let’s put all our cards on the table, and let’s find a win-win for everyone’.”

The final inspirational word of the day came from Al Gore, former US Vice President and co-founder and chairman of Generation Investment Management. He said technology bears the solution to the earth’s climate problems, and told the story of how Google asked DeepMind to cut back on the energy consumption of Google’s servers. The DeepMind team did so without any new hardware, but with the more intelligent management of electrons. They reduced their energy consumption by 56 percent.

“This sustainability revolution has the speed of the digital revolution and the magnitude of the industrial revolution,” he said.

While he admitted that pessimism is tempting because of irrecoverable damage was done to the earth, he stressed not giving up. He referenced the struggles that the LGBTQ, women’s, and civil Rrghts movements have gone through, and said they all came to a threshold where the choice between what’s right and wrong became clear.

“That’s the inflection point the climate movement is at now,” he said, urging businesses to get aligned with the movement. “We can transcend limitations. We have the political will to bring about this change, and political will is itself a renewable resource.”

Amanda Connon-Unda is VP of marketing at Nrwl.io, a front-end engineering and technical transformation consultancy that specializes building products for developers and training enterprise development teams in Angular, so they can build better software and achieve their broader transformation missions. Amanda has a proven track record as a marketing and culture leader, and at Nrwl.io, she works with engineering consultants who partner with clients in the telecom, banking and aviation space to help them build software like Google does, at a large scale.

While the Ontario government is promising two-way all-day Go Train service between the startup-heavy regions of Toronto and Kitchener-Waterloo, for Thalmic Labs CEO Stephen…